Hello there, sorry for the little delay, April has been a very busy month for several reason we’ll go over in a bit. As usual with those posts, we’ll go over what has and what will be done with our projects during this month. Additionally, for those interested, I’ve just written a second post-mortem about Unending Galaxy. While the first one was mostly about the sales and marketing aspect, this new iteration is solely about the game itself. Anyway, let’s get to it 🙂

First, let’s start with the elephant in the room. Aka, no update for After The Collapse last month. Don’t worry, it’s coming. But there’s a slight change of plan due to Steam (again). Simply put, for some reason, completely out of my control (and apparently a mystery to steam staff as well apparently), the algorithm gods who rule the store decided to divide our views by 90% from a day to the next. And I actually mean 90% in a single day (heck in a single hour would be accurate).

Technically, the views are a bit more targeted, meaning that the income hasn’t decreased as much as the views, but all in all, I’m running at a net loss every month since February. And, no, I have no explanation for it, neither does Valve. If you’re wondering why developers are flocking to Epic, it’s because of stuff like that, on top of its mixed reputation, Steam is becoming increasingly unreliable.

Don’t worry, this doesn’t mean I’m letting After The Collapse go. The game has way too much potential and I’ve invested too much into it to just let it fade away. But, I have to make some concessions. As I’ve explained in a previous devlog, I wanted to work on a (much) smaller game during the weekends, partly for fun and partly not to have all my eggs in the same basket. But somehow, I never took the time to do so as ATC always felt like the number one priority. Anyway, I finally took a few weeks to work on a prototype. Game development proper should take another month total, but that will be evenly split with ATC. I’ll get to this new game later down the post.

That doesn’t mean that I left After The Collapse rot in a corner for a whole month either, don’t worry. As you might know if you’ve followed the development, our 0.5 branch is nearly finished and I’m mostly working on 0.6 now. As each branch is introducing new feature sets, the downtime between updates is increased while we’re transitioning to the new version. That being said, a test version of 0.6 should become available for our testers in a few weeks. 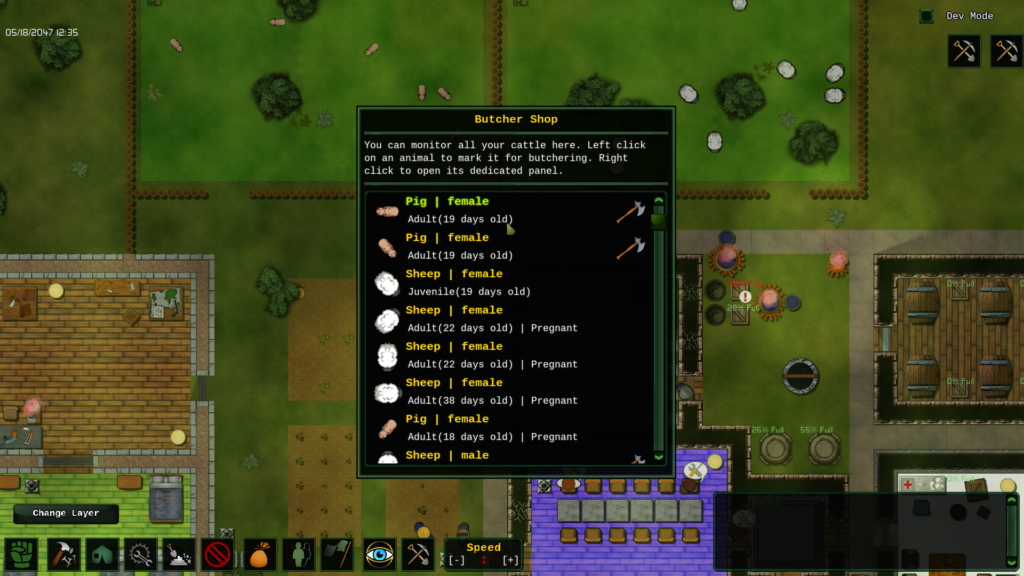 Right now I’m putting the finishing touches for the animal husbandry feature introduced last version. Meaning a proper menu for the Butcher Shop, which is especially useful when you have a bunch of different pastures and don’t want to go through them all to select which animal to butcher. I also went through a fairly extensive code optimization and standardization, making the game more responsive and easier to maintain and code for.

And, of course, I’m in the process of adding the world-map, which is the central point for most of the features we’ll be adding in 0.6.x.

Note that this is extremely early code and concepts being explained here. I’m mostly at the experimentation phase. Anyway, After The Collapse’s world map will be a city and its direct neighborhood. Generally speaking the closer to the city’s center, the more difficult will be to survive (be it for building or expedition purpose) but the better the loot and resources. Additionally, the outer ring around the city will contain resource production facilities, initially destroyed or/and overrun by monsters/bandits. Claiming and repairing those buildings will generally give significant and regular resource income.

Above, 3 different city layouts. It’s a 32×32 layout (can be tweaked to pretty much any size) and each cell represent a playable area. Red zones are considered part of the city proper, which doesn’t mean that everything outside of the city limits is without buildings, it just means that the concentration is much lower there and that there’s a much higher chance that the underground will be a cavern instead of a sewer system.  In white are the roads, You can see a few external roads connected to nothing, they’ll be used to connect the city to some of the resource production facilities. The green layer in the back show how much forestry each cell has. Not pictured are multiple other height-maps similar to the one used for the forestry, but for hills, building damage and for the ground terrain itself.

Of course it’s far from final, but it’s a decent enough start. The whole map and world generation, down to the smallest details, is seed based. It means that you can share or reuse cities with a single number.

Firstly, we’ll be using the city map (a textured version that look better than those prototypes above, obviously) for starting position selection. We’ll keep the custom game selection for those who just want the basics of the base building game, but picking a location from the world-map will become the default method to start a game. Secondly, we’ll be using actual map locations as possible destinations for expeditions, and later down the line make some of those expeditions happen under your direct control. Also, with a proper map, we’ll be able to introduce proper factions and their respective territories, which, in turn, will help define better special events, diplomacy and trading.

With all those goals, changes regarding the base building proper will be limited during the 0.6 branch. We’ll likely new weaponry, add a few resources and tweak existing systems, but that won’t be our main focus.

As explained before, this is nothing major and I even have yet to find a name for it. Still, I think it could be a fun little time killer. Simply put, it’s kind of a rogue-lite SHMUP using Unending Galaxy’s universe (and assets) as a theme. The game is divided in 2 phases, the progression phase and the action phase. The progression phase is roughly similar to the one featured in FTL, you can upgrade and repair your ship, buy new items and select which “level” you want to tackle next.

It’s in the action phase that the game shines. The idea is that with your direction keys (or gamepad stick), you’re moving a fairly slow and bulky carrier-class ship, while you use the mouse (or other stick) to move a swarm of fast and agile fighters. While your main goal is to keep the carrier alive, the swarm is both a damage dealer (fighters will shot at the nearest enemy) and a shield against enemy bullets (absorbing shots). The carrier isn’t complete helpless either, while it’s not equipped with direct damage weapons, it normally features a shield, it rebuilds destroyed fighters, and has a speed boost. It also features a special weapon, which can be a standard area-of-effect bomb, a flurry of guided missiles, a boost to the power of its swarm, etc.

Enemy ships drop resources that can be traded for incremental carrier and fighter upgrades during the progression phase.

The player will have several carriers to choose from, including some that can only be unlocked by achieving specific actions or reaching a given total score. And that’s roughly the gist of it. Here’s the general chart:

It’s a simple concept for an entry priced game ($2.99-4.99). The game is also platform agnostic, so it will work on Windows, Linux, and Mac natively. The action phase is mostly complete, outside of cosmetic details and ship data. What’s left is the progression phase which shouldn’t take too long. After that, it’s the fabled “last 10%” of development time, balancing, data, and user interface tweaks.

I understand that dividing the development time between two products will no please everyone. If there was any better way, I’d use it. But there’s not. The alternative would be to crank the advertisement of ATC up to eleven and fully release (going out of E.A.) way too early. Sure, it would provide a burst of income for a short time, but it would only make things much worst in the (not so) long run. Maintaining a large project while publishing much smaller ones in parallel when the finances get a bit low seems like the most honest way to move forward, even if it’s going to put us a bit behind schedule. Also there are a few advantages in developing multiple products in parallel. Some optimizations and systems I found while making the new game have been ported into After The Collapse (and vice-versa).