Welcome to After The Collapse 0.8.6: Nature’s Wrath.

I know I said this update would be smaller than usual, while it’s still technically true it’s not by much. As usual, we’ll only go over the major improvements and changes. The full changelog is at the end of this article.

So, fire is a thing now. Not just the flamethrower effect, but actual fire that will propagate over tiles as long as there’s fuel to get it running. It’s not something you’ll encounter very often, but it can catch you by surprise. It can appear during heat waves when plants can catch fire, when using the flamethrower, the RPG launcher or other energy weapons. 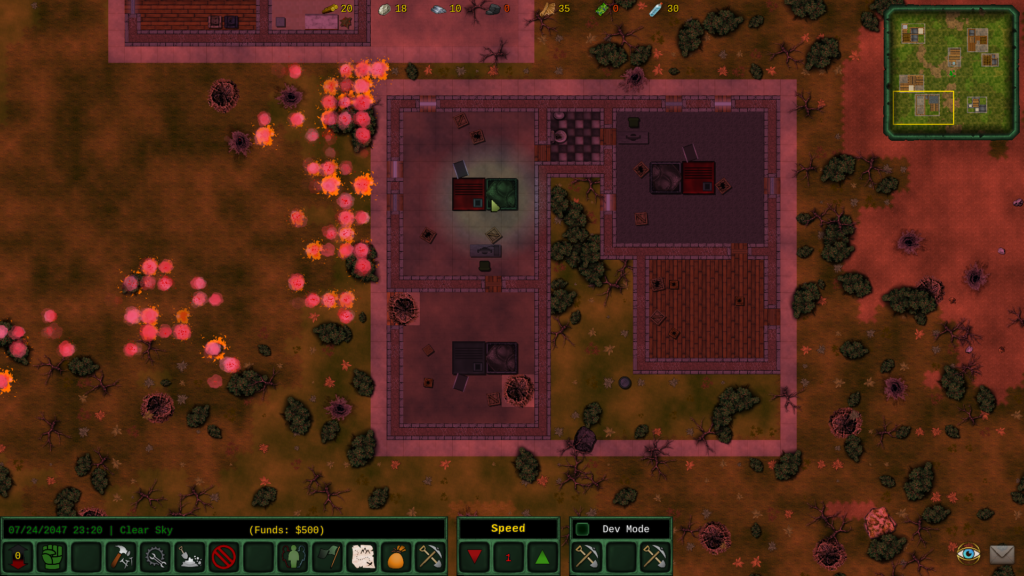 Survivors (and prisoners) will automatically try to extinguish nearby visible fires. When in doubt, you can switch to combat mode and order your guys to “attack” the fire to get it under control. In the same spirit, rainy weather patterns will help by dousing the flames.

Tiles on fire apply fire damage over time to everything (that can burn) standing on said tiles. Tiles maxed out of fire intensity will “jump” to an adjacent tile with something it can use as a fuel source. In practice, dense forests with a lot of vegetation might get wiped out without your intervention. Constructed tiles (like marble or cement) are pretty much fireproof, but a house built on wood foundations will burn very quickly.

Until now, trees would just “spawn” fully grown every month at midnight according to some arcane formula. It was a supposedly temporary hack implemented like 2 years ago. It’s time to let it go. Now, each plant is growing from a “sprout” to an “old” stage, visibly changing over time. They also reproduce according to rules set in their data files. Different tree “species” grow on different tiles and at different rates: for instance the newly introduced palm trees grow on sandy and ground tiles while standard trees will grow on the several variants of the grassy tiles.

The change is not just graphical, younger trees will give a lot less resources than fully grown ones when cut down. You can also collect sprouts and plant them to generate your own forests. Last but not least, I’m introducing the first wild tree you can use as a “factory”. By exploring farms or dealing with traders, you’ll find apples you can plant to grow an apple tree. Apple trees, once fully grown work as seasonal (15 days on/off cycle) self-replicating food production factories. You can make cider or pies out of the collected apples. Both item giving happy thoughts to your survivors when consumed.

All the trees you can plant yourself are in the new “Nature” tab of the building menu. Make sure you plant them on the proper tile type (a little guess work is needed), otherwise they will die off quickly.

Note that the cycle of nature is very slow, it takes a total of 50 days for a standard tree to grow from “sprout” to “dead”. And within that time it might spawn a few new trees. On the other side of the spectrum, bushes grow & die in a few weeks, spawning as many children as they can within their limitations. I tried to keep it relatively on par with previous versions when it comes to forest density and wood availability but given how different the system is, it’s something that will probably need some tuning over time.

Of course, all of this can be modded, new plant species can be implemented and existing ones altered.

I was technically supposed to add more buildings for the expedition manual combat encounters, that didn’t happen as I got sucked into a vortex of fixing several low level problems with the combat AI and given the end result, it was for the best. I rewrote the whole AI logic for what’s basically the “attack” order. Simply put, performances in large raids are about 10 to 20 times better. You can have 100 hostile raiders on the map without suffering from (too noticeable) slowdowns now.

Additionally the attack script is a lot better at what it does. Hostiles should be a hell lot better at understanding what they can attack, what they can’t and what door they should break to get their ways. It’s literally night & day in terms of performances and efficiency. It’s not perfect of course, and I’m sure that the old script was covering a couple edge cases this one ain’t yet, but on average it’s definitely a lot better.

The optimizations are not limited to combat encounters either, the game’s performances are a lot less tied to the size of the map you’re playing on. Deletion/Addition of path-blocking items on gigantic maps no longer trigger a small slow down. Same goes with your own population and previously very CPU intensive calculations are a lot smoother now. I’ve seen save-games with 120+ survivors running at barely below 60fps.

There’s a couple balance changes worth talking about.

Firstly, the Food/Drink consumption difficulty settings work differently. Instead of making your survivor eat more often, it changes how efficient is the food. At the highest difficulty level, a settler will need to grab 2 meals instead of one to achieve the same result. The big difference being that it won’t impact the base’s productivity nearly as badly. It makes those settings a lot more viable. Given how common “too much food” is a complaint from the more experienced players, I encourage you to experiment with it.

Secondly, a new “World Map Loot” setting has been added to the difficulty settings. It does what it says on the tin, and alters how much loot is available in the world map. The default value correspond to roughly half of what was previously available. The rational behind the change is that there was too much loot in the world, making the cheap generic loot run pretty pointless compared to the more costly focused one.

I added desert variants of the Riverlands and Lakes biomes, coming with the new palm trees. Those biomes are also easier to spot on the world map, as they’ll have a small body of water on the tile. 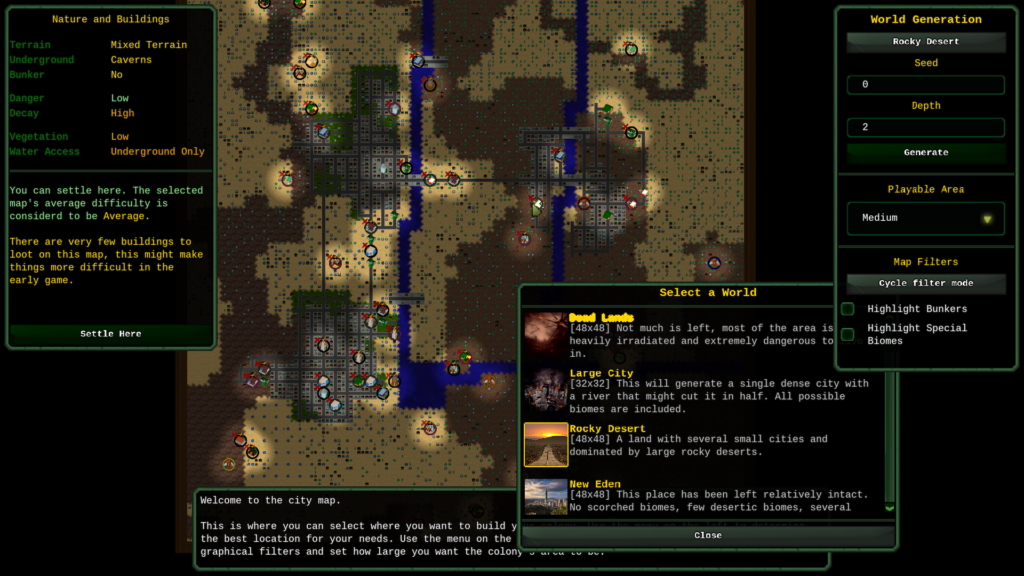 First, a long overdue change. I rewrote the water collecting barrel’s menu entirely. It looks and works like a standard factory menu now. You can set limits to how much dirty water you want to collect, change priority, the usual. In the same spirit, all lamps (no matter if normal or grow lamps) can be toggled on/off from their respective menus. 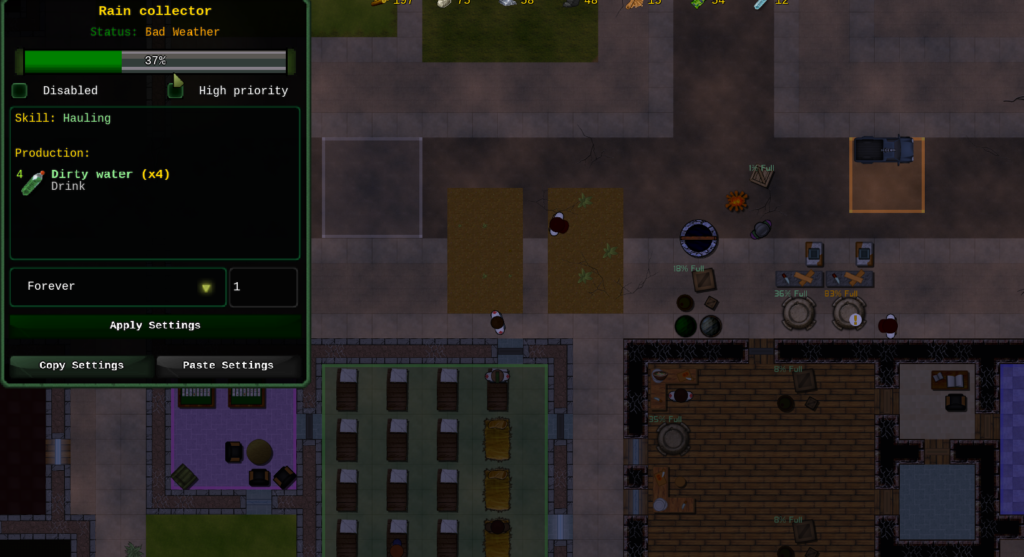 Secondly, thanks to a very good suggestion from BallC, I’ve implemented a new keyboard shortcut to c[o]py whatever object your mouse is hovering, ready to be build. Works with walls, furniture, crafting stations, doesn’t matter. You can change the shortcut in the settings, as usual.

I don’t normally list bug fixes in the articles, but I’m happy to tell the old guard that I fixed 2 of the oldest bugs in the game. Namely, a build order would complete but the target building wouldn’t be created and the resources would still be consumed. It was as rare as it was annoying, but it’s finally over. Same goes with a bug where an animal or human would still use a recently deleted stair.

That’s on top of 30 other fixes ranging from incredibly minor to sorta annoying.

There’s no major change to modding only additions. As such, mods should work as usual.

This version is technically compatible with saves dating from 0.8.3 and over, however plants in existing saves won’t grow or multiply until you start a new game.

This version is pretty solid. Handling large fires and thousands of plants on very large maps was kind of a challenge, but I am very happy with the results, performances have never been that good and the game is very stable. No doubt I will be proven wrong by someone within a few days, but that’s what hot-patches are for. You can expect a few small weekly patches before the next large update as there’s still some features and improvements I’d like to make.