Here is a new release!

This is not 0.6 yet, for a few reasons I will go into a bit later, but this is still quite the major update in its own right. Let’s have a look!

This new version is building on the foundations laid out by 0.5.8. It further improves the user interface (including several community requested features) and graphics while adding a lot of proper content for you to play with. As usual, I’ll go over the major stuff only, full changelog at the bottom.

It is now possible to start underground (it’s in the Custom Game / Survivors tab). If you select to do so, a fairly large vault will be spawned underground (works both with cavern and sewer map generators) and your survivors will be placed inside.

The vault itself is fairly large and contains just enough for you to handle a small colony. It comes with a few features, including its own electric grid, which are normally not unlocked until much later into the game. Note that it doesn’t “unlock” the associated technologies. If you uninstall or destroy the generator, lights or power relays before you get access to the proper technologies, you won’t be able to place them back. The electric grid is primarily there so you can grow crops from within your bunker.

And to make things a bit more dicey, the ability to dig stairs to communicate between the underground and the surface has been put into the Masonry technology. It’s likely that this option will be put in its own, more time-expensive, tech later (after testing basically).

This new feature is still in its “junior” phase, so you might encounter a few odd things. But, barring any major problem, you can likely expect “enemy populated” bunkers in a coming update.

I also added quite a few new pieces of equipment to the game. Some can be crafted, some can only be found through expeditions or bought from traders.

First, we have stat boosting melee tools. With the new “Basic Tools” technology you can build shovels to make your farmer more efficient, pickaxes to mine faster, on top of the metal axe (moved from Melee weapon tech) boosting disassembly speed. The idea, as you can guess, is to gradually include tools and gear to improve the performances of your survivors.

Regarding proper weaponry, I added 3 sniper type variants: hunting rifle, sniper, heavy sniper. As the names imply, they are all long (to very long) range, slow rate of fire, high (to very high) damage weapons. The last two come with a visor, increasing the user’s perception and by extension their field of view and accuracy. I also added a grenade launcher, which is the first in-game weapon with lobbed trajectory bullets. While it cannot be fired across walls, it will ignore cover and any other obstacles. It packs quite a punch but it’s not very precise. It also requires its own type of ammunition (grenade rounds), and while you can’t craft the gun, you can certainly craft the ammo with the new associated late-game technology “Explosive Ammo”. And finally, there’s an energy based weapon, also with its own ammo. You’ll have to search for it.

As for the armors. It’s a bit more mundane. Added a spec-ops helmet to go with the armor, a medic vest, a firefighter vest and helmet. The medic vest does provide some bonus to medical skill, but beside that it’s pretty standard. Most of those armors are there to give a bit more variety to trading and expeditions.

I’ve also added a few game events. Those include several mid and late game raids from former soldiers and crazed military robots. Those are fairly standard but quite more difficult than your typical raider or tribal raid. Robots, especially, can take quite a punch before going down. Speaking of which, you will see more robot related late game content in coming updates.

A less “classic” event has been added as well, the “Heat Wave”. As the name implies, it will increase the water consumption of your above ground farms. It also applies a debuff to your survivors, making them a bit grumpy, slower and make them consume more water. To make that happen, the game is now tracking, in a simplified way, the temperature for each independent map. While I’m certainly not going to go to the extreme lengths seen in RW or DF regarding temperature handling (per tile), it’s fair to say that the game will soon be handling slight variations of global temperature.

As you can see in the screenshots, the main UI has been tweaked quite a bit. The invasive game-log on the bottom right is gone, and replaced by right-aligned text directly over the game area. text lines are, of course, still clickable. As such, it leaves more rooms for the button bar, which in turn got a slight re-skin. The ugly “change layer” button got integrated into it.

Additionally, the “Expedition” menu got a new tab, summarizing the results / loot from the last expedition. Weapon and Armor panels display which special effect they may give when equipped. The top part of the “Storage” screen displays the amount of food and drinks for easy access instead of electronics and canned food. Item count display has been standardized across all menus. Double clicking stuff in the trading menu set the quantity to the max. And last but not least, the combat overlay got slightly improved too.

Player-built doors can now be properly locked. I know, it’s revolutionary! It only applies to doors you have built yourself. Just click on the door, and a menu will appear, allowing you to lock/unlock it. 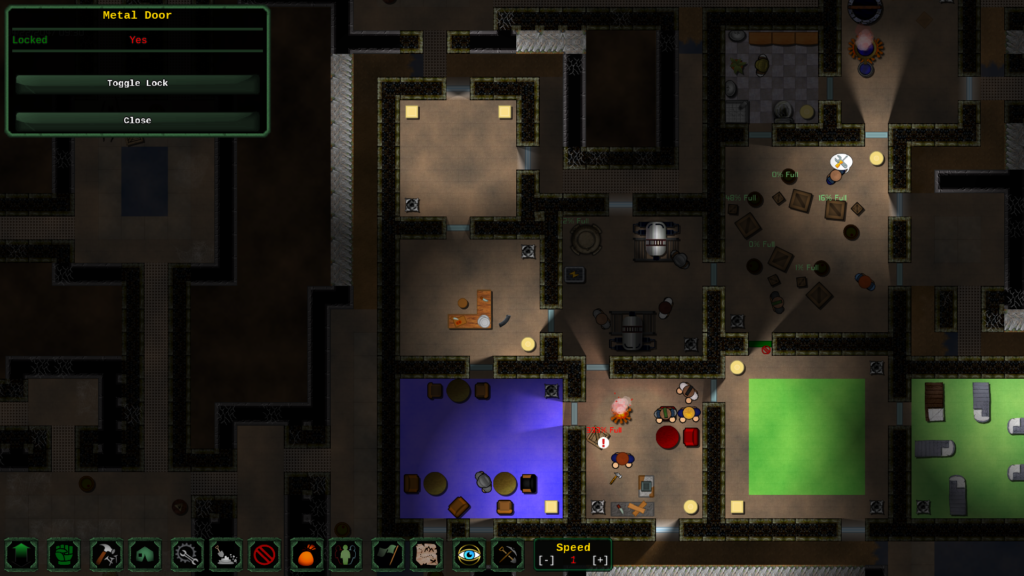 It has no effect on hostile NPC. They always consider closed doors to be “locked”, hence why their normal behavior is to shoot them down (at least for non animal ones). However it works very well on your people and (potential) allies. You can use doors to make sure your people won’t wander off your base when you don’t want them to. This is especially useful when you start your game in an underground bunker, given how hostile are the surroundings.

Loot tables for expeditions are much more detailed. You’ll get more varied, and more relevant loot to each location your explore. I’m currently in the process of replacing the various “loot tables” used in-game by this new system. Its biggest advantage being that loot tables no longer need to be updated each time a new item is added, which should save time in the long run.

Map generation is seed based, and a “seed” field has been added to the “new game” menu. However it’s not yet very easy to use, as you’ll need to save this number AND every single other map related setting to get a copy of an existing map. I will be adding a couple buttons to “export / import” map settings to a file and/or clipboard to make that process easier soon.

I also fixed a few bugs and added and revamped sprites and animations. The usual.

This version is compatible with previous 0.5.8 saves, with the usual caveats (some of the new content not available on old saves).

Well, 0.6, for good. The reason why it got further delayed is that the whole map thing is not up to the standards I want it to be, even for an early access release. The over-world generation proper is done for the most part, but there are still a few pieces missing. Pieces that really need to be put right. I will be publishing a development log about the subject in the coming days.