To mark After The Collapse’s first anniversary, I am very happy to release the the largest update for the game to date. With close to 90 changes, improvements and bug-fixes, there’s a lot to go over. As usual, I will keep this post focused on the major things and you can refer to the full change-log is at the very end for a more complete overview.

This update should be made available on every store in the coming hours. Also note that this update will break compatibility with save-games from previous versions.

This is the core new gameplay feature in this update. The map and expeditions have been tied together and improved. You can refer to this article for the nitty-gritty details, but the major points are the following:

The associated user interface has also been tweaked to accommodate the changes. You select the destination on the world map, which will also show travel information whenever relevant. Also, I added health and carry capacity information to your group. And, while at it, I fixed some minor rendering issues on the world map itself.

The diplomatic screen introduced in the previous version was bare-bone, to say the least. I took some time to flesh out both the menu and the factions themselves. Each faction got its own leader selected from a pool, and their own history they’ll generally be happy to tell you about.

A new faction has been added too, the Mutants. They are green, big and mean. Right now they behave like other standard factions, except that their “citizen” are green and fans of pipe weapons. You’ll meet them during the random raids (don’t worry, defending yourself won’t impact the opinion of the faction as a whole). And, yes, more will be done with the factions in the future, there’s a reason why they aren’t procedurally generated.

Again, it would take too long to list every little change here. Still, there’s a few nice features which deserve to be listed on their own:

As usual, the general goal is to show more useful information in less clicks. There’s still more to do here, of course, but it’s getting there. Hopefully, next stop will be to merge the combat & normal UI (with the ability to toggle that state for some survivors while keeping the rest of the UI unchanged), and multi selection for construction jobs.

Pipe weapons are now a viable alternative to modern weapons. I added 2 new techs to unlock 4 new pipe weapons (smg, rifle, flamethrower, rocket launcher). As usual, they are slightly worse than their modern counter-parts, but they are much easier to produce and maintain. To make this change more effective, bandits will often use pipe-weapons themselves. Hopefully, it will make it more difficult for you to acquire mid and high tier modern weapons. 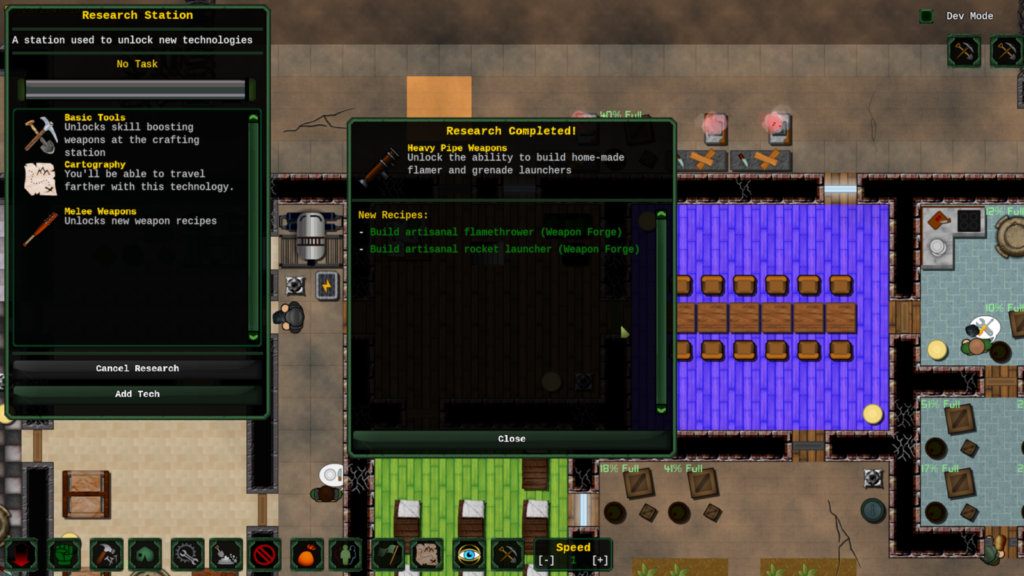 Fuel is now an item category containing our good old “charcoal” and the new and relatively rare “gasoline” resource. Gasoline is mostly used in the construction of flamer-thrower ammunition and can serve as fuel for a new Power Generator building. While i’m talking about new items, with the proper tech, you can now build metal fences, and flame-throwing turrets.

Weather can influence a lot more things than it could previously. It can change the ambient light, affect plants’ health, tweak the temperature, give traits to your survivors and so on.  As such the “heat wave” is no longer a special event, but a somewhat rare weather pattern with roughly the same effects as the event itself.

Another new weather type is the “Acid Rain”. It will render anyone on the surface sick and will gradually damage the health of your plants. Of course, it’s a rare pattern that won’t trigger in the early game. To complete this feature, a plant’s health now influences how much you’ll be able to gather. It also means that “hostile” weather patterns will no longer “take the spot” of other potential events when it’s time for one to fire. It’s now perfectly possible to be raided or for a trader to visit during a heat-wave.

As you may have noticed by looking at the screenshot, graphics got an improvement pass too: survivors leave footprints on non constructed ground (grass and such) now. They will also be shown holding items whenever they are moving them around. And, granted you’ve placed small tables in front of your chairs in the dining, they’ll be placing whatever they are consuming on said table. “Hit” animations are also being played over some of the objects being “razed” (trees and big rocks).

Most of those graphical changes can be toggled on/off in the settings.

It’s not a secret that After The Collapse’s sounds are lagging behind the rest of the development. While this update isn’t going to fix everything, it’s definitely a big step in the right direction. I’ve added 6 new music tracks for variety sake. More importantly, the soundscape (ambient sounds) got a bunch of new background tracks and effects. And yes, it means that the game will no longer be playing that “crow”track nearly as often.

There’s also about 40 new sound effects, dispatched between different buildings and activities. The general goal was to make things less repetitive. As such, there’s now 3 different effects for eating and drinking. New effects have been added to the basic kitchens, crafting stations, water purifiers, tinkering stations and electric kitchens. Same goes for most common actions, there are new sounds being played when removing trees, rocks and bushes. In the military area, single shot rifles and melee weapons got their own specific sound effects. Same thing for most of the of the fauna (spiders, lizards, mantis, crabs).

There’s plenty more planned in that area, but that will have to wait for a more dedicated update.

This is, by far, my largest update to date. With it, After the Collapse is really taking shape. I took extra time to get rid of most, if not all, of the bugs, big and small, I am aware of. I’ve also played the game in multiple settings for several hours using this version. Yet, with such a change-log, it’s pretty much impossible to be certain that every potential problem has been caught. So, do not hesitate to report any (new or old) issue arising in 0.6.5, I’ll patch them out as quickly as possible.

Expect another article in a week or two, giving out details about the next updates 🙂