Here’s the newest update for After The Collapse. While the change-log might not be as long as with our previous major updates, it’s introducing a couple new major features which will be expanded upon in future patches. I also improved many aspects of the user interface while fixing all the bugs that have been reported so far. Note that I won’t be available from Friday to Monday as I will be in Spain. I’m writing this post in a bit of a hurry to be honest. So, don’t panic if there’s something going wrong and you’re not getting a speedy response to your reports, I’ll get to them as soon as I get back.

This is the new major feature in this version, both the map and the way expeditions are handled have been overhauled.

As you can see, the map and expedition screens are a bit more user friendly. More importantly, most map locations are now defended by creatures and bandits. Before you can loot their content, you’ll have to send soldiers to secure them. This is done the exact same way you’d do for any other expedition. You won’t have any control over the fights (at least not yet), but the menu will tell you your chances of victory before launching the expedition. Just make sure not to send people you otherwise absolutely need. Once the location is secured, you can send your usual scavenging and survivor retrieval teams the same way as before. 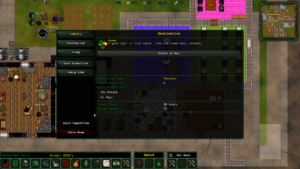 Some locations, like the factories, farms, mines and so on, are now considered “production centers”. It means that you can send settlers there on a semi-permanent basis (still through the expedition menu). Once settled in, and the location repaired, they will send resources back to your base on a daily basis. They also can be called back home through the map screen.

The idea behind those features is to allow AI factions to do exactly the same, which will trigger late game conflicts and some use for the diplomatic screen. Of course, I will be adding city level events as well (creatures invading a location, and other surprises). This will be the subject of the next and last content patch for the 0.6 branch.

One of the goal for this update was to “merge” the building and the combat GUI in a single one. I spent a lot of time trying to do just that, but I won’t lie, it’s not something I can do in a reasonable time frame. There are too many things relying on the current system by now. It would take several dedicated weeks at this point. However, I did the next best thing! One major problem with the current system is that it’s pretty much “all or nothing”, unless you’re willing to manually toggle on/off people military skills depending on what you need to do, which can be very tedious.

As such, it is now possible to quickly put one or multiple settlers in combat mode no matter if their military skill is enabled or not, and more importantly, without interrupting anyone else’s job. This makes the exploration of unknown buildings or clearing a single but pesky creature way easier. This can be done in two ways. 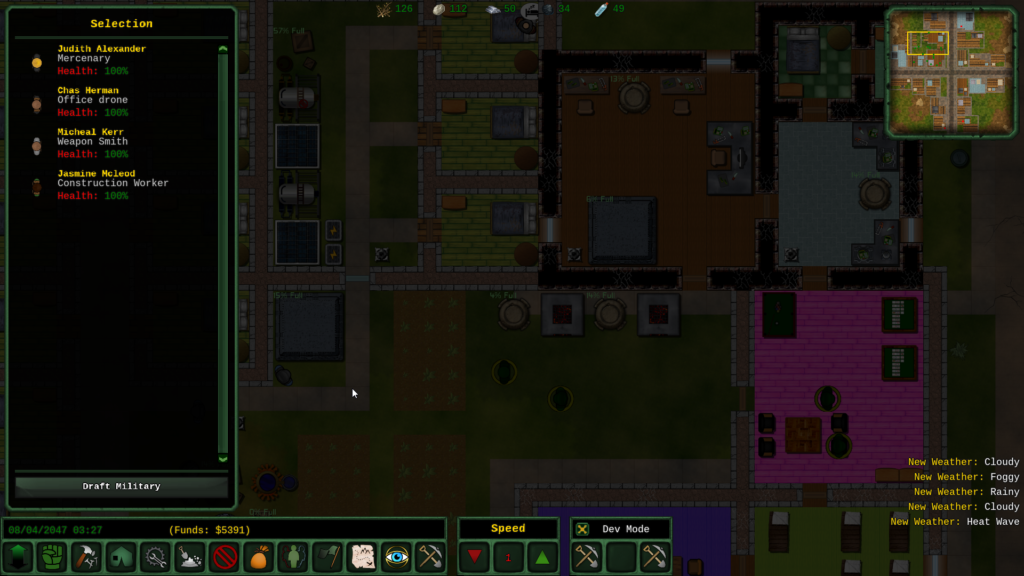 Firstly, you can now lasso select a group of settlers even in build mode. Doing so will open the menu shown in the screenshot shown above. Pressing the “draft military” button will toggle combat mode with only the selected people used as soldiers (independently of military skill) while the rest of your settlement will continue to work as usual (they won’t flee to a safe zone either). 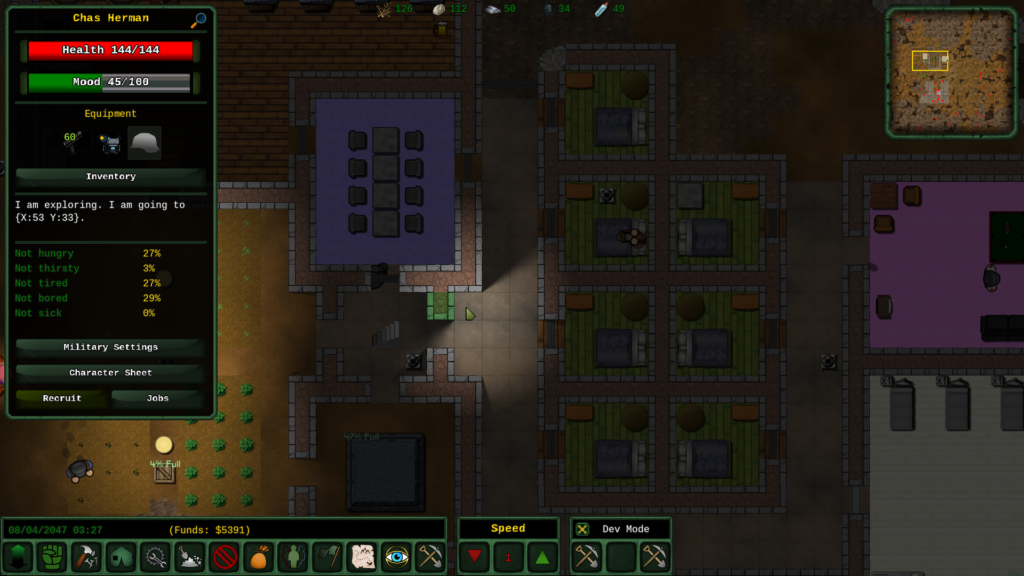 Secondly, there’s a new “recruit” button at the bottom of the individual settler info menu. It does the exact same as above, except that only the selected settler will be put in combat mode.

Following many of your suggestions, I’ve added a bunch of little things to the UI. The most notable one is a configurable list of resources at the top of the screen. 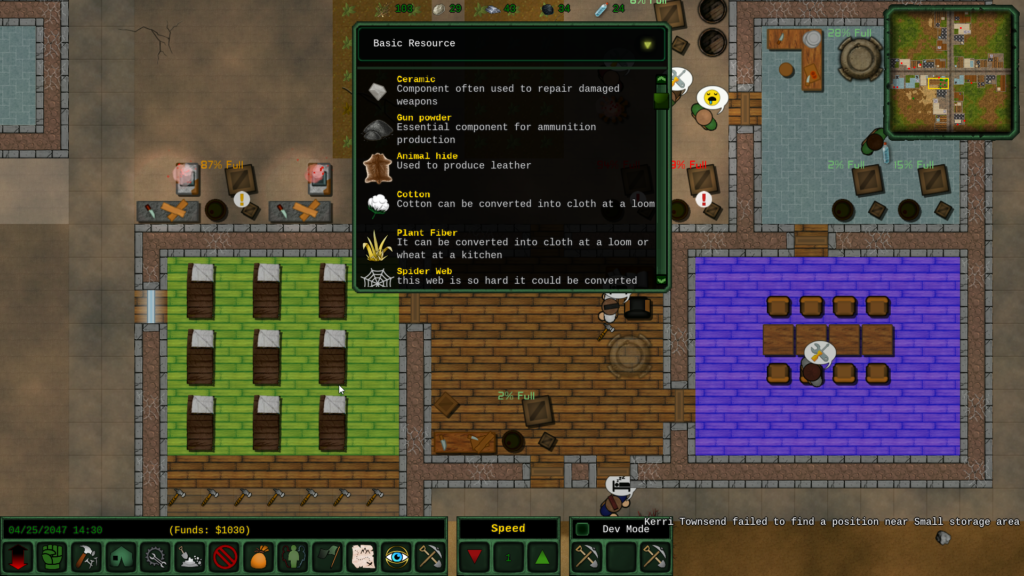 Clicking on any of those icons will show the menu pictured above which allows you to select a new resource. The general idea is to reduce the amount of time spent in the clunky storage menu.

Additionally, I’ve added a right-click menu for all the consumable items (food, drinks, medical stuff) showing exactly what they do. Similarly, standard resources also got their own right-click menu displaying their weight, value, and a clickable list of everything that can be built using those. As with all the item related menu, you can access those menus from pretty much any screen displaying such items (inventory, trading, factory queues / recipe list). 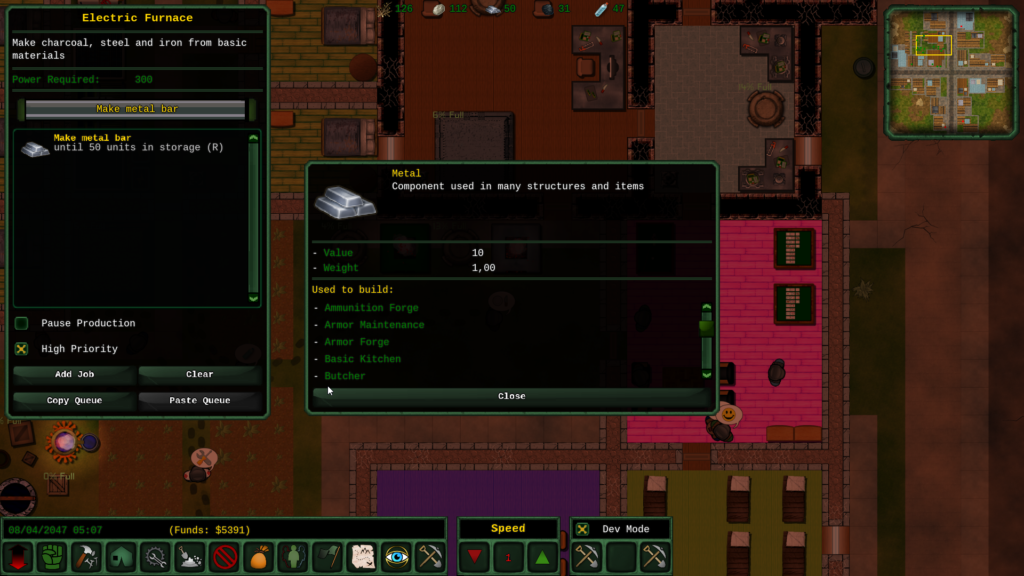 There are a few other minor improvements, updated tool-tips and such. Refer to the changelog at the bottom for a full list.

I improved performances on larger maps quite massively. Without entering into technical details, the size of a map (and how much content it contains) has much less of an impact on performances than before. Additionally, some of you will be happy to know that I got rid of an annoying micro lag that was happening every couple seconds on maps where the content of unexplored buildings is hidden.

And, as usual, all the properly reported bugs/crashes have been fixed alongside a bunch of small issues I noticed during testing. Thanks to all the people who contributed!

Save-games from 0.6.8 are technically compatible with a few caveats. The content of every unexplored building will be revealed, meaning that if there’s any zombie in there, you’ll soon be under attack. No way around it. The world map will not contain the 3 new locations. Existing locations, while having hostiles automatically spawned in, won’t be properly claimed by hostile factions, this is just a graphical thing, tho. Large batteries will have to be removed and put back again for their new stats to apply.

While not as massive as our two previous content patches, this is still a very important update. The next version will make good use of this new expedition framework, making the world outside your base much more dynamic. Plus, the ability to receive rare materials like electronic parts and steel on a regular basis makes the construction of robots much more manageable. As I said earlier, the next version will be the last in the 0.6 branch. It should have been this one, but the time spent on trying to merge the build and combat UI forced me to delay those last missing features a bit.