So, this is technically the second part of the Expedition Overhaul, but it became much larger than anticipated. We have a lot of content to go over and not everything will be covered in the article. As usual, I will only list the major changes in this article. Please, look at the changelog for a complete list.

The promised feature is finally here! I know, it took a while, but here we are. Simply put, you can decide to play combat encounters yourself instead of letting the dice rolls decide. When you select this option, a map will be generated. The nature of said map depends on the location. Right now, only the various factories, the lumber mill and the military base have dedicated buildings and/or layouts, the other locations use a generic layout (a single large building). Enemy selection depends on who (or what) is currently controlling the area. If it’s another faction, you’ll encounter their soldiers, otherwise it might be infected or some hostile fauna. 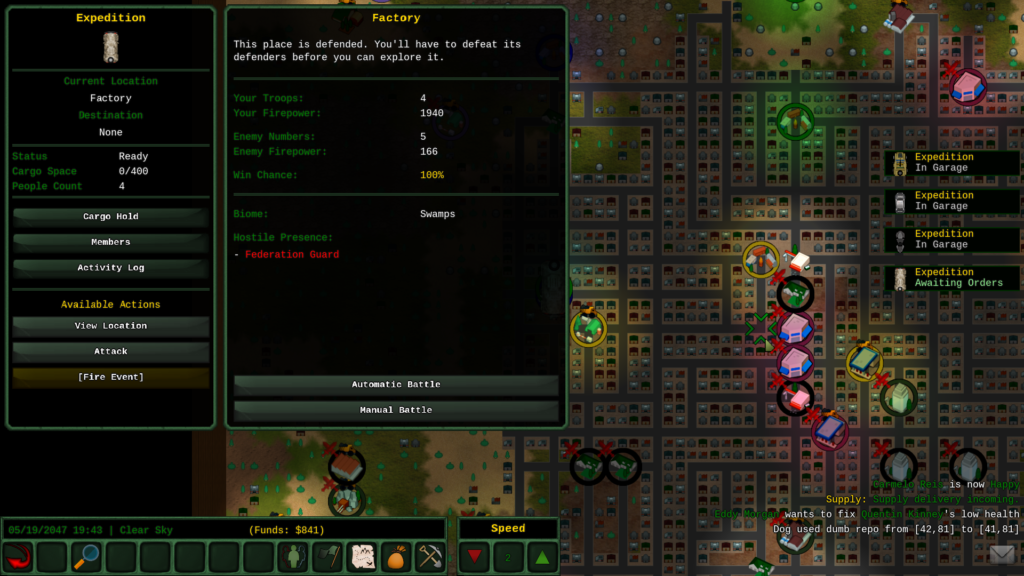 The battle will happen in a “time bubble”, your base and the rest of the game will be paused. You don’t have to worry about missing a trader or being attacked. Of course, your goal will be to kill everything hostile on the map or die trying as, right now, there are no way to retreat (it’s going to be added later on, don’t worry). 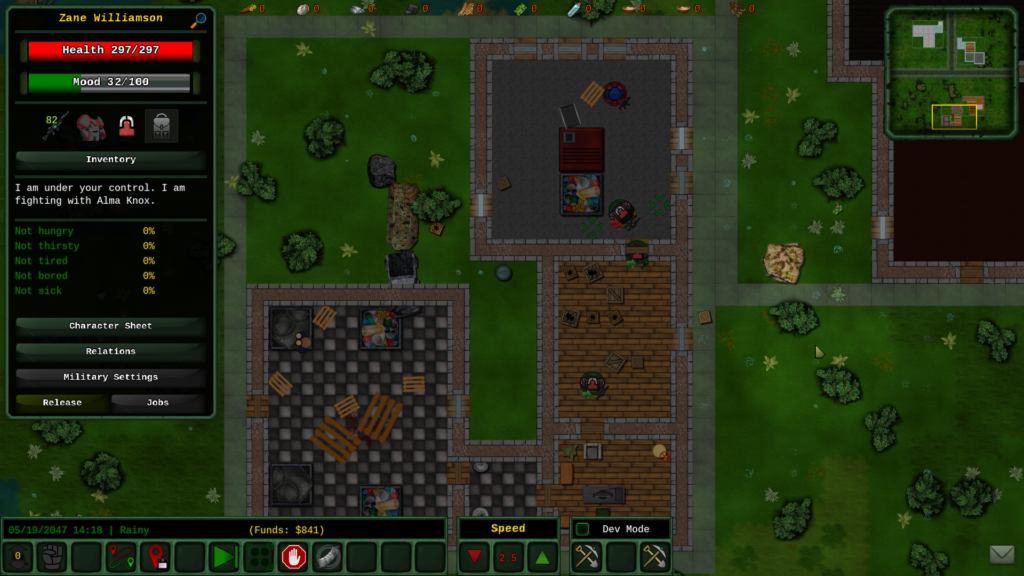 Also, ammunition handling is disabled during those fights. Simply put, both you and the enemies have infinite ammo. It’s unlikely to change as there are no simple, non cumbersome way to make that happen (both code and gameplay wise) . The whole system is still a bit bare-bone, the difficulty ain’t really scaled to its automatic counter part. The enemy placement is not really adapted to the task. And most locations are using the same map layout. Still, the base system is there and it goes without saying that the following patches will be improving the whole thing.

Bored of that big and repetitive world map? Well, me too! This is why we have new world presets, rivers, bridges and the ability to have multiple, smaller cities. 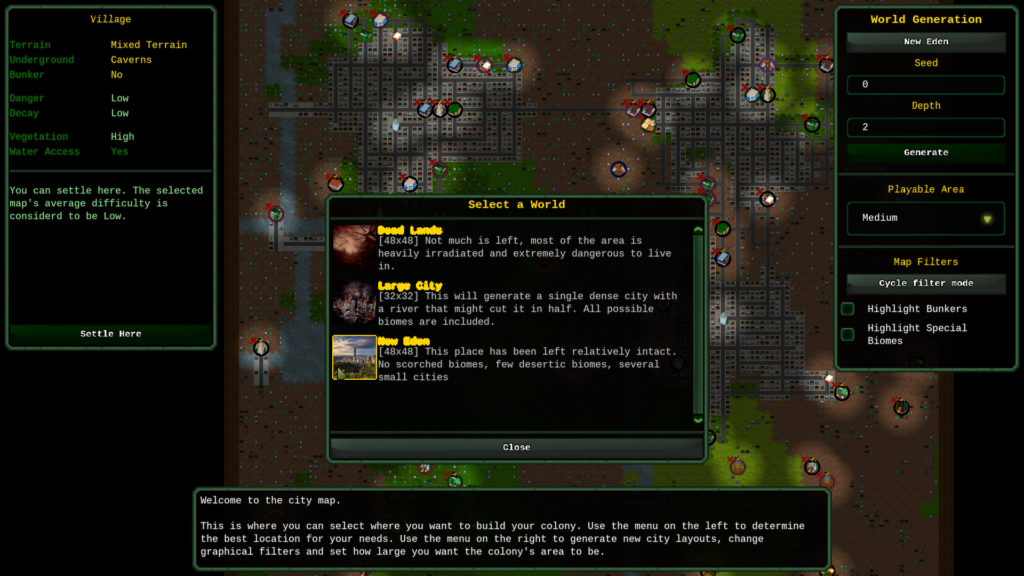 See this nice button in the top right? It opens the menu in the center. A menu from which you can choose between 3 (currently) different world map generators. And yes, as usual it can be modded. It’s not just cosmetic, for instance, the Dead Lands map will be mostly desert and scorched biomes while New Eden will have no hostile biomes at all. Rivers are not just there to be pretty either, they block the path of your expeditions (until you find the new amphibious vehicle) which will have to use a bridge to go on the other side. 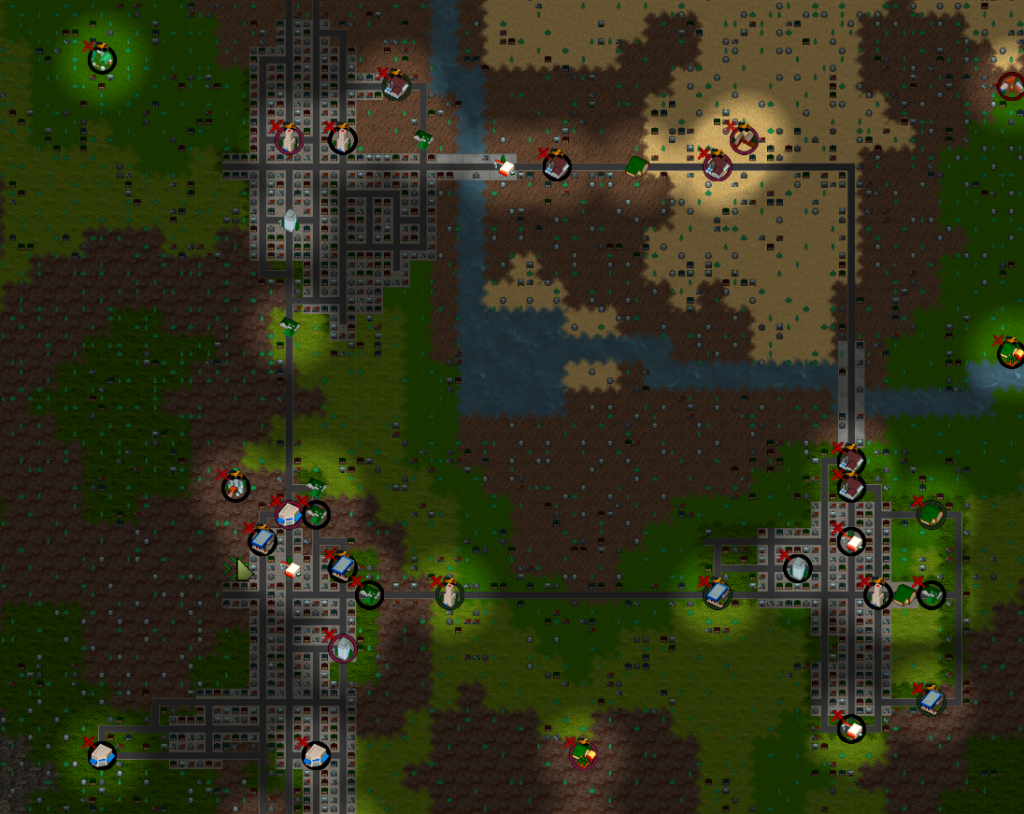 The improvements don’t stop at the world map either. New buildings have been introduced (various factories) and locations like the industrial zone, the factory and the lumber mill can be settled into. Additionally the amount of buildings in non city/roadside maps is now proportional to the size of the Playable Area. In other words, gigantic maps no longer feel so empty. Finally, the placement of buildings in Village type maps looks more organic.

Building upon the interactive travel events from the previous update, After The Collapse now includes the ability to build multi stage questlines. The first introduced quest is the new Bandit Convoy event (it’s repeatable). Occasionally, your expeditions will encounter a very well defended enemy convoy. The game will offer several methods to deal with the problem (or ignore it). Assuming you manage to intercept said convoy, one of 3 rewards will get unlocked, 2 of them are rare or expensive loot, and the last one will continue the quest further. 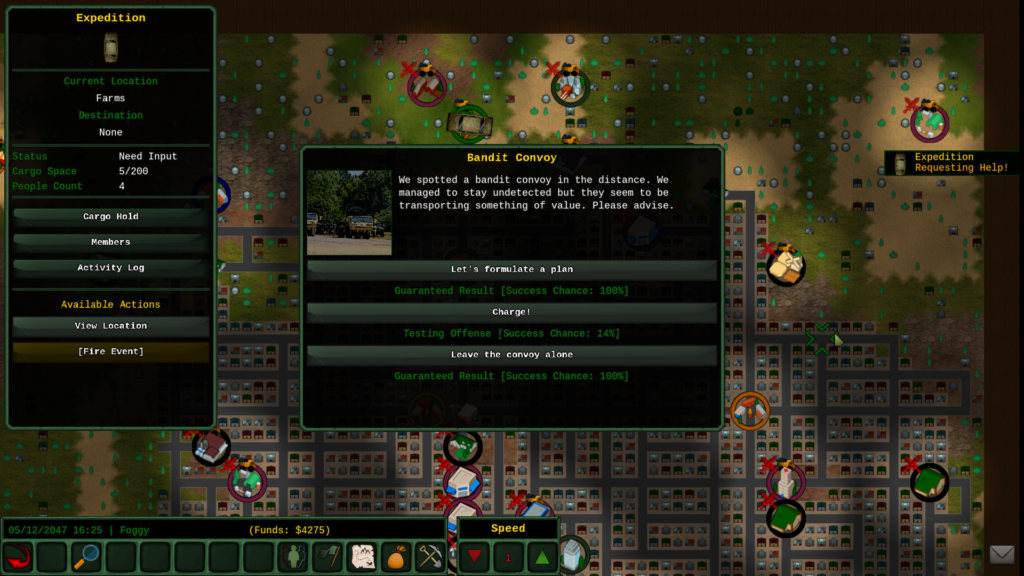 Of course I won’t spoil it further, but going through that quest several times will definitely highlight the abilities of the new system which will be extensively used in future patches and updates. If you’ve ever played Space Rangers or Frostpunk, this kind of short interactive stories should immediately feel very familiar. 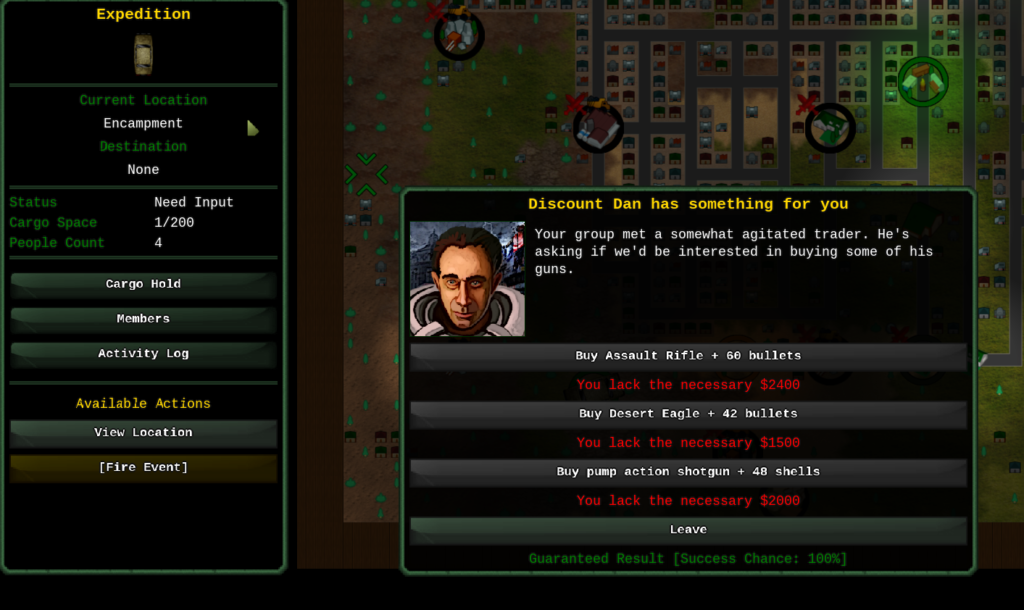 Additionally, now that the world map is really dynamic, after unlocking the Radio technology, you’ll occasionally receive radio transmissions from various sources. It might be a trader in your vicinity, a group of civilian asking for help, and so on. Those events will generally add a time limited location on the world map for you to explore. Beside the time limit, the main difference between those locations and the usual ones is that exploring them will trigger a dialog box (like the one in the screenshot above) or a small quest.

Due to popular demand (and completely unrelated to this update’s thematic), you can now build a variety of traps, from simple fall traps your survivors have to reload manually to automated metal spike traps powered by your generators. 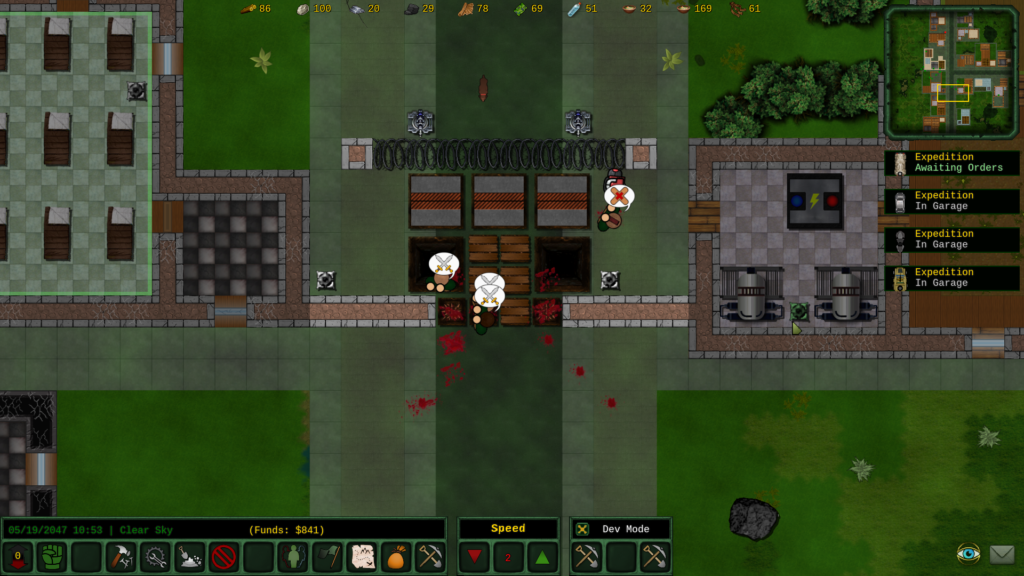 Ever thought about building an underground lair filled with your creatures but wondered how to lead your enemies there? Well, with those new fall traps, any hostile stepping on one of them will fall down in the layer below giving a free meal to whatever is crawling there. It’s still a bit basic, and probably not very well balanced, but I think it makes for a fun addition to the defensive roster.

In no particular order:

Turrets have a way more useful right click info panel / encyclopedia page. Same goes for the new traps. Speaking of documentation, an article about the Pandemonium virus has been added to the Encyclopedia. It explains in details what it does, how to detect it, and how it’s transmitted. All of which might be very critical details for at least some of the scenarios.

The option to focus an expedition loot session on a particular category, which in practice adds stuff (that might not be there initially) to the location’s loot table, is still there, but using it “consumes” the building 4 times faster. So, yes, you can still loot a lumber mill for weaponry and ammo, but it’s gonna empty it much faster.

And of course there are tons of fixes, tweaks and minor improvements on top of all this.

This update is (surprisingly) compatible with save-games from previous versions. There are a couple limiting factors, though:

Mods for previous versions (unless hopelessly outdated) should be compatible. The only thing is that any mod relying on the now defunct Advanced Carpentry tech might need a small update.

I’m very happy with this update. Between the manual combat system which now has solid foundations for me to build upon and the quest / dynamic location combo there’s a lot of new and pretty unique content that can be added in the future. Best thing is, it’s entirely data driven using elaborated text files. It’s now perfectly possible to add quests telling the player to visit several locations, build specific unique techs/items, and deal with problems going beyond the base building itself.

Speaking of quests, it’s likely that in a very nearby future, the more Sci-Fi elements of the tech tree (sentient robot building I’m looking at you right now) will only be unlocked through such quests which would make a lot more sense.

Of course, I need to warn you. It’s a very big update touching on a ton of things, as such, you can expect new and interesting bugs. They will be dealt with in the usual follow up hot-patches.

Speaking of bugs, now that most of the work for the 0.8x branch is done. I will take some time to focus on some of the few remaining long standing (but elusive and relatively uncommon) bugs  and glaring omissions while improving the newly added systems described above.

Now, I’m going to take a week off because it would be nice to see the sun at least a couple times before September 🙂