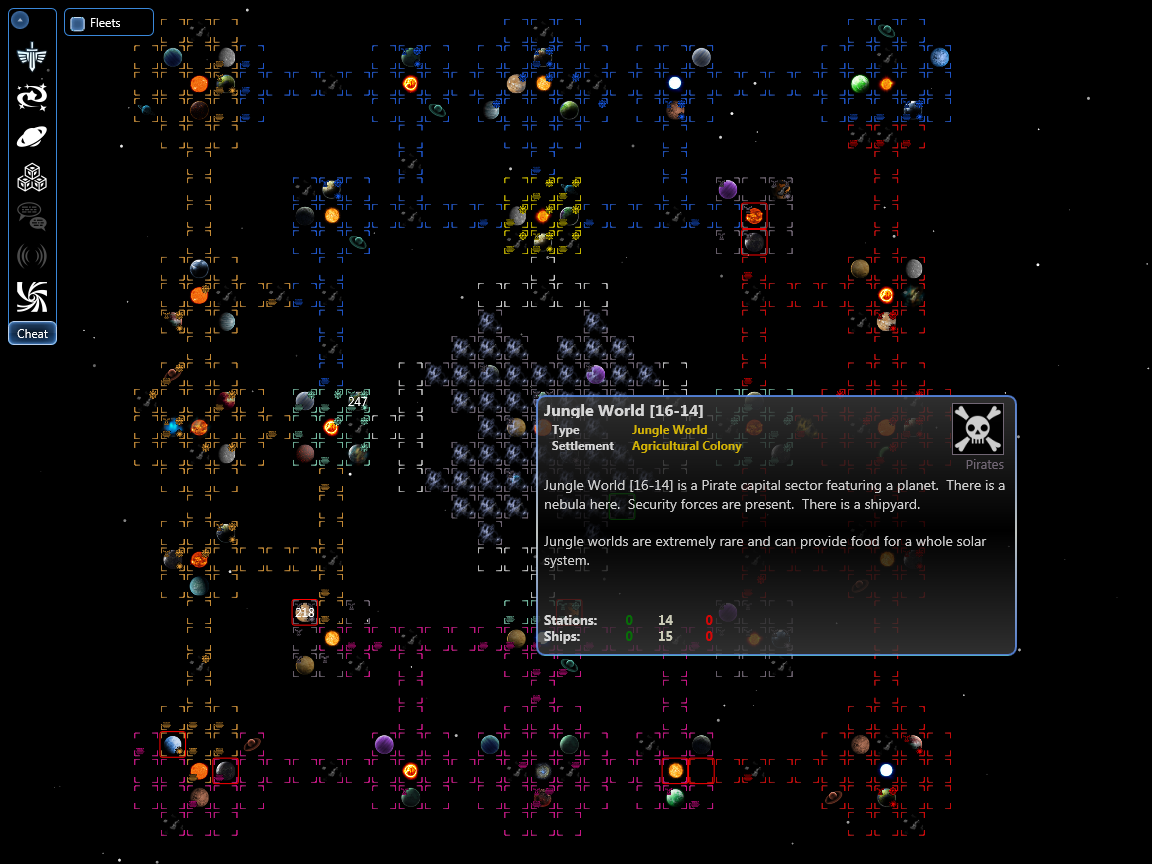 This release mainly focuses on the Ease of Use. While not as massive as the previous release, it still has quite a few improvements worth checking. It is also a more “professional” release with most of the small bugs and annoyances fixed. The only reported issue I wasn’t able to fix in time is that the game will be extremely sluggish if you have, for a reason or another, disabled Windows’ “Themes” service. As usual, the article will explain the improvements into more details but here are the main points:

Many tweaks and improvements to the GUI have been made in this release. Listing all of them would be too long (and that’s why we have a changelog after all). In general, menus are more practical and give more information. For instance, it’s now possible to check the statistics of a weapon or shield before buying by right clicking its entry in the trade menu, same goes in the ship setup and shipyard menus. In general, stats are more informative: DPS against hull and shield are shown for weapons, ship stats are readable by a normal human being.

The menu for player owned shipyards has been improved, you can now order the ships you build there to reinforce one of your control groups automatically. Also, the sprite and the statistics of the ship you can build are displayed on the menu.

A save/load menu has also been added, featuring 10 slots and the ability to name your savegames. Quick load and save keyboard shortcuts have been added as well. I have yet to add an auto-save feature, though. I made ship selection easier, as selecting a 3rd party ship won’t unselect your own ships (if any) anymore. It doesn’t seem much said like this, but it makes the keyboard shortcuts like attack and protect much easier to use. In general, ordering ships around is less cumbersome as I fixed a few odd bugs (like the one that would prevent you from sending ships in a sector that is empty) and added a bit of feedback to some commands. In instance, when you send a fleet a few sectors across, instead of simply displaying “Order: Move To” it will also display the destination sector. I also made the sector map a bit more practical, selected objects have an overlay with their name and health status. I also fixed the aspect ratio for background objects.

I added a proper main menu to the game and moved the one used previously to “New Game” as shown below:

Also, as requested, there’s optional help popups for the main side bar, and it’s possible to invert the mouse wheel zoom function. As explained in a recent devlog, it is now possible to customize your faction thanks to the new traits, laws and tech groups. When starting a new game, you’ll get 5 points to spend toward traits and tech groups. Traits are bonuses you can choose for your faction, like a flat bonus to your weapons, a diplomatic bonus, shorter build times, and more. Some trait costing more points than others. Right now, all of them are bonuses, but it’s likely that negative traits will be added as well later on.

Tech groups are the result of decoupling ships/equipments from factions. Beforehand, most ships would be directly tied to a specific faction. Making difficult for two factions to use the same ships. Now that we have an intermediary between the factions and the ships, it’s possible for 2 factions to share ships or equipments. As a result, the player is no longer limited to the “independent” tech group, and can choose another one as well. Here again, some techs cost more than others.

Laws are more for the flavor. Still, you can forbid civilian bounty hunters and asteroid miners, which will grant you points to spend, but on the other hand, you won’t benefit from the money and security they bring to your faction. I made some minor additional improvements to the faction AI during wars with the ability to cancel invasions deemed too costly. I also prevent invasion fleets from leaving their gathering sector if it’s getting invaded by another fleets. This is to prevent an annoying and relatively common case where two fleets that are enemy to each other would cross path in route to their respective destinations without trying to intercept each other. You will also receive alert messages when a faction declare war on you (or is bribed into doing so).

I added a basic Police AI, which runs an improved version of the standard patrol script. They should occasionally scan local trading vessels for illegal wares and react accordingly. It’s fairly basic at the moment, but will be improved upon as usual.

Pirates got some love as well. The raiders can now use their jumpdrive to jump to safety and seek repairs. It still need testing but it’s likely to be extended to other ships with a self sufficient AI (miners, bounty hunters, cops, traders..). You will also find pirate bases in non pirate sectors. And I added a new mission : “Destroy this pirate base”. It’s available in most trading stations and military bases granted there’s a pirate base in a 2 sector radius. Now that my issues with rotations are fixed, we have nice bullets and lasers instead of ugly balls. Ships can align to any angle instead of locking at each 45° increment. It may not seem much, but graphically, combats and fleet movements look much, much better.

I also made the parallax scrolling a bit more noticeable by making the celestial bodies move a bit faster. Wargates are also constantly rotating.

Nebulas are also generally denser, and I added options to the map editor to select a particular sprite and density setting for each sector instead of relying on random generation. It’s particularly visible in the Galaxia and NebulaX maps where the nebulas regions are now uniform (it was an ugly patchwork beforehand).

33 bugs have been fixed in this release, ranging from crashes to small annoying glitches. The general trend is that there’s less and less “crash/critical” bugs found, which is good. Many of the bug fixes are savegame (not keeping track of sector data, fleets and control groups mainly) and user interface (buttons not working as advertised) related.

All reported bugs have also been fixed, apart from the game running extremely poorly if you have the Windows’ Themes service disabled. So, if your game runs at 10 FPS, that’s why.

Oh, yes, your ship can shoot horizontally and vertically straight now instead of having your bullets weirdly steering the wrong way. That was annoying me to no end, and as usual with this kind of oddity, it was a small thing to fix once the culprit is located.