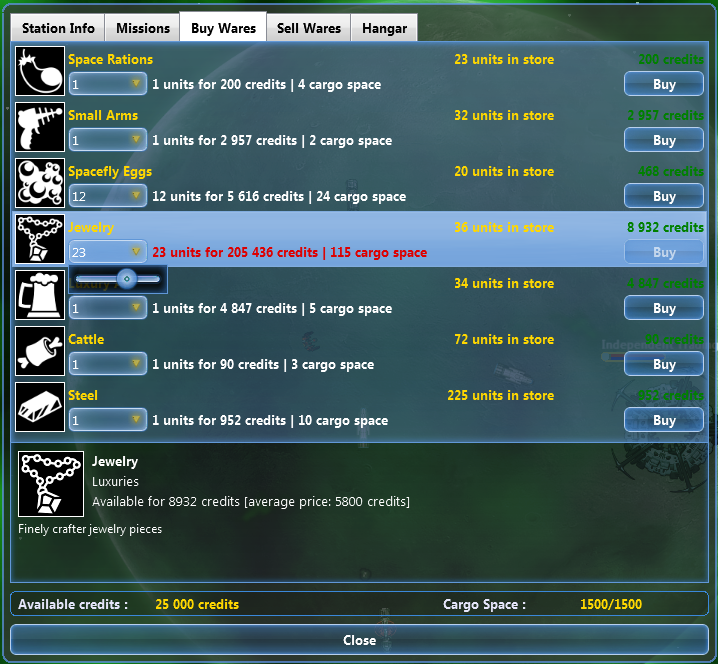 Sorry for the small delay, I made the mistake of launching Crusader Kings II, and well, restoring the roman empire took a bit longer than expected (freaking HRE who decided to be a stable and powerful blob for once). And many thanks to those who bought the game on itch.io or donated. Beta 2.1 seems to works okay for most if not all of you, which is good 🙂

Anyway, it is time to deal with the trading part of things, and there’s a lot of ground to cover. This post will discuss what I am doing now and what are the goals for the beta 3. Hopefully it should be released before the end of the month.

edit: I removed the discus comment system on the website and put back the old one. Discus was getting out of hand and calling scripts from dodgy and privacy invasive websites. Also replaced and improved some other features of the website, and added an option to subscribe by email. The mobile version should be easier to read and navigate too.


So, the first order of business was to redesign the trade menu which was impractical while looking kinda awful at the same time. Here’s what the new version looks like now: I moved everything into the list, removing the right panel. You can either enter a value or use the track-bar to set the amount. Double clicking an item set to the largest value you can buy (or sell). And I added your money and cargo space information to the menu (no idea why I haven’t done so before). I also fixed the exploit where buying and selling the same ware at the same station over and over could give you infinite money. And you can’t see it in the screenshot but there will be a “sell all” button too.

I am also rebalancing the prices, production rate, decay rate, and quantities of most wares and factories. It’s as tedious as it sounds and I won’t bore you to death with the details.

That said, let’s see what need to be done for beta 3:

So, as you may expect I am going to add an AI module for ships that will allow said ship to buy low and sell high either in a given solar system or universe wide. As usual, it will work for both the player and the AI factions. Those ships will be able to flee from combat, get repairs if needed and I may allow them to buy an escort.

I already added two of those in the last beta but they have no usage beside trading. The general idea is that each faction can produce a “high-end” trading good that can either be sold for a lot of profit or be transferred to a specific, yet to be added, station to reduce war weariness.

War weariness had, until now, no other effect that making factions more likely to make peace. On the next update it will reduce the speed at which shipyards can build ships and civilian tax income, making the production and supply of such commodities a way to keep on fighting for factions that are at war. The (important) side effect is that you can help the war effort of a specific faction by supplying such products, or you can do the opposite by preventing said faction from acquiring it. Right now, prices are decided by what the trading station has in store. It’s fairly easy to exploit once you have enough cargo space and money to buy stuff in bulks. I’d like to switch to a system that is a more focused on sectors. First, planets that have colonies should provide import/export modifiers for specific wares depending on colony type. Secondly, prices should take into account production capacities in the sector as it’s rather silly that you can sell energy cells in a sector with a sun just because the cargo hold of the local trade station happens to be empty. Basically I want trade station to sell (and sell only) stuff produced in their sector while they’ll buy (and buy only) stuff needed by the factories in the area. I still need to add a “non aggression pact” treaty with standard factions. Also, as I explained in a previous devlog, the diplomatic menu with the pirates will be changed by something that make more sense with the ability to pay the pirates so they won’t attack your ships and other options to attack specific factions / stations and so on.

I am also likely to rewrite how factions interact. The general idea is that factions will send diplomatic convoys to make peace or improve relations instead of doing that immediately. As a result, it is possible for a 3rd party (like you) with enough firepower to disrupt their operations.

I will add various smuggling and trading missions. Also, factions, when at war or in bad terms with their neighbors will offer at the military bases near the border missions to destroy specific assets. While very rewarding those missions will quickly kill any reputation you may have with the target faction.

I am also going to add a few extra special events that trigger on specific conditions, similar to the neo-spqr / human federation event but for other factions either when they become too big or too small. And, of course, there will be the usual UI and graphical improvements, bug fixes and random new features. I am also likely to further improve the pirate faction adding new missions dialogs and options 🙂

I think those are the main points, of course that may change a bit during the development but the general idea should stay the same. Feel free to discuss either in the comments below or in the forum.

Also, yes I know that the documentation is a bit outdated and incomplete, I’ll work on it as soon as I can gather the willpower and the time to do so (it takes a lot of both).