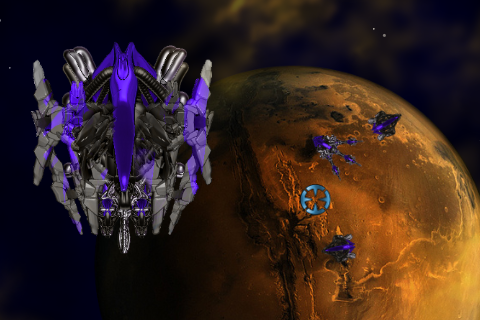 First, a reminder that Unending Galaxy has been submitted to Steam Greenlight, so please consider giving it your vote, that would help immensely. People who already bought the game on other market-places will get a free key when the game gets released on Steam. And in case you missed the post, the 1.0.0.1 version has been released too.

That being said, let’s see what awaits us in the next phases of development. Of course, we’ll have a few maintenance patches to fix and improve the existing stuff, but that shouldn’t take very long. What we’re going to see here are more long term and larger themes. As with all posts labeled “design”, those are general ideas that may be either integrated fully, with modification or even discarded entirely. I do not have an ETA for those general ideas, and you are welcome to comment and contribute. Also, note that I am going to take a couple weeks of (much needed) vacation, and as such, I won’t be as responsive as you’re used to this month. This is a relatively simple one and will likely be integrated soon with no/little modification.

Currently, planetary colonies in UG contribute to the economy by bringing tax income and ship part production. They also determine the amount and type of docks you can build in the corresponding sector. They also contribute to your maximum army supply. And finally, given you’ve built a trade station in their sector, some will export trading goods for free and import others at a good price automatically. Colonies can be faction (tech group to be exact) specific or not. They are built automatically with no player input.

What’s missing is fairly obvious in my mind.

First and foremost, players (and AI) should be allowed to build colonies of their choosing. The building itself should take time and cost money. For that, another menu should be added to handle colonies more easily, likely something akin to the asset list, but for colonies, with buttons to build/raze colonies. That will also likely lead to an overhaul of the Sector Info menu (F3) so it can give more information about the colony and sector. I may even merge the menu with the sector map.

What’s not going to happen however, at least in a foreseeable future, is adding a planetary layer where you’d build structures for your colonies. I don’t have anything against the concept in general. But, in our particular case, I don’t think it would add much compared to the amount of work required. That would imply to revamp the (recently implemented) colony code (that works well) completely and find enough sprites for the buildings. And more importantly, UG is already a complex game when it comes to the details, adding another layer on top of the existing systems is not really necessary when roughly the same results can be achieved by adding more colony types. Credits to the nice folks on the bay12forums for the finer details of this one. Unending Galaxy will feature research, but not in the form of the all too common tech trees, and we’ll see why now.

As you should know by now, in Unending Galaxy, you can spend hours as a simple pilot trading, raiding, scavenging and decide to become a faction later on. The issue, if we include a classic research system, is that when you want to become a faction you’ll likely get hopelessly outgunned by the major powers who had hours to progress. More to the point, classic tech tree or not, there’s a snowball effect where bigger factions can only grow bigger and stronger while the smaller ones have no chance of catching up.

What we want is to keep everyone within a given “power” margin and give factions that are coming late to the party (the player) a chance of catching up. There’s several ways to do that, but what I am currently leaning for is this:

First of all, research won’t unlock new weapons or ships, instead you’ll be allowed to improve the damage output, energy consumption, speed, and other specific statistics about your assets by a given percentage. And more importantly, instead of scaling the ship/weapon improvements infinitely, progress will be relative instead. What it means, is that the lowest science producer will get no improvements to choose from while the biggest one will be allowed to improve the base statistics of multiple items. Those in between will get the ability to improve one or a few items based on their rank. If the leading faction looses its position as a science producer, it’ll simply loose some of its bonuses. At least that’s the general idea, details may vary a bit when we get to the actual implementation.

Science “points” will be produced in the same way as ship parts. A production chain that will likely include a few high end trading goods and a “science lab” which will convert all of this into science points automatically. And as usual with this game, it will fit into the existing systems : don’t want your main competitor to stay ahead of you ? Ask a few pirate bases to destroy their science labs and you’ll be safe for a while. Need some additional “free” points ? Go destroy the science labs yourself and collect the loot.

Sure it’s not as sexy as unlocking the “Ultra Beam-o-Doom (alpha prime ++)”, but it looks like a solid enough mechanism. It’s something that won’t require a bazillion new art assets that I can’t provide, it scales no matter how long the game is running, and more importantly I can feed to the AI systems fairly easily.

Additionally, that will help further differentiate the various factions. Siraks for instance will likely favor speed and firepower, Niliths will put points into their already heavy shields while Asterians will further improve their hulls. Combine that with the faction specific colonies and we’ll get fairly unique factions behaviors solely through data related changes (which are moddable). Right now our only defensive structure is the military base. And as anyone who had to withstand an invasion from another faction can tell you, it’s not going to deter your enemy much, and that can forces you to keep a large military reserve ready. While there’s nothing inherently bad with that, additional options wouldn’t go amiss.

This one is simple enough. I will gradually add static defensive structures with specific long range, high damage weaponry. They’ll likely be built the same way as stations but with a relatively low cost and building time. I have no intention of making a tower defense game either, there will be a limit to the amount of weapon platforms you can build in any given sector. Their role will be to deter small military fleets and inflict significant damages to invaders, not to act as a perfect defense mechanism or to replace the police.

Here again, that will allow for more diverse faction behaviors. The regular human tech group, for instance, has a fairly weak fleet which usually cause the Federation to be wiped out in a majority of games. The idea here would be to give them fairly beefy defensive structures to make them more impervious to invasions. On the other hand, the Draths, who have stronger ships, would get weaker defensive structures, making it harder for them to protect their territory efficiently. Simply put, diplomacy is currently quite shallow. Well, you can still turn factions against each other, secure  temporary peace, beg for money, but that’s about all really. In an earlier statement I said that I wasn’t sure about a trading table (as in Civilization for instance). Well, I guess I will need to retract this statement now that factions have proper tools to judge the value of things. So, a trading table will likely make an appearance with the ability to exchange sectors, docks, money, ship parts and science production.

I also want to make alliances a bit more tangible, with the ability to coordinate (to some extend) with your ally so the AI can defend your territory or join you in an attack. Right now, I already have the tools to do so, but I still a need to find a way to limit how easy for the player it would be to exploit this system.

Putting back the pirates on the diplomatic table is another goal, but this time they should have very different options from the other factions. Not very hard, but here again I’ll have to “teach” the AI factions to use this feature and it will take some time.

Of course those are the main theme. There’s a lot of other smaller improvements planned, including better carrier controls, improved weapon type diversity, additional events, maps, AI modules, UI … but that’s the usual stuff you should get used to with my updates by now 🙂

There’s other “large” plans, but I think this wall of text was long enough as it is. We’ll get to those when the time comes.