I have settled for a name for the base building game, After the Collapse. It’s not the most original name ever produced but it still convey the game’s setting. Also while this devlog contains screenshots, be aware that those screenshots are showing placeholder assets and do not represent the style or atmosphere I am aiming for. Now that you have been warned, let’s get to it.

As noted in the previous devlog, my main focus was to get the factory and storage zones ready. Outside of cosmetic details, this is done. Converting base resources into useful tools is the bread and butter of base building games. This is why I’m trying to get it (mostly) right from the start.

Here, by clicking on a forge the following menu opens. It contains a basic description of the forge and what it’s used for (well, currently it’s a default placeholder text, but you get the idea), the currently queued jobs, and various options. 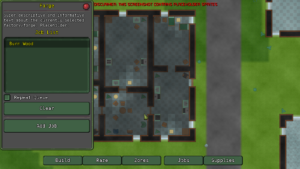 By clicking the Add Job button, you get to the recipe menu shown below. It contains all the recipes usable by the forge and what they do. Here you can add those recipes to the forge’s current queue. 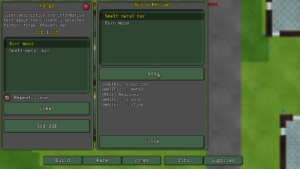 Once satisfied with your changes, you can close the menu. Your settlers will automatically bring the required resources from your storage zones to the forge. Which brings us to the zone and storage menus.

As with many games in the same genre, After the Collapse will be using a zone system to setup storage areas and rooms for your base. Simply put, you set some areas of the map to be used for specific tasks or rooms. Some of those zones will require you to build specific items to become functional. For instance, a bedroom will require at least a bed and a chest of some kind. Of course, you’ll be allowed to add decorations to increase the quality of said room, making its owner happier in the process. Right now, only the storage zone is implemented, but adding the rest won’t require much additional work.

Clicking the zone button at the bottom of the screen will display the following menu (or at least something pretty similar, with filtering options). From here you can see all the currently setup zones and what they are for, add new ones or delete existing ones. Clicking on an item in the list will center your screen on the selected one. 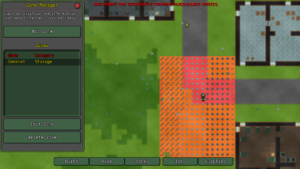 Adding a new or editing an existing storage zone will land you on the follow screen. From here you can rename the zone, and change what kind of items you want to be stored there. 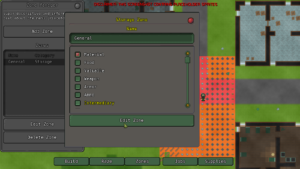 That way you can store your weapons close to your barracks, your resources close to your factories, etc. It’s a fairly straightforward system. Right now it’s only possible to filter by general categories. There’s some code to support a per object filter, but it might be overkill. That will be decided during early access.

While I haven’t yet written any user interface to show them into more details, I’m beginning to flesh them out a little. Settlers are defined by an extensive set of physical and mental statistics ranging from strength (how much they can carry) to social and ethics (which will be used to determine how well they will live together). I also added specific traits which will influence their decisions processes and statistics. So yes, you’ll have “lazy”, “quick” or “gluttonous” settlers to deal with.

More information will be coming in the next weeks about the settlers and how they will deal with each other.

While not as multi-core oriented as our previous game, Unending Galaxy, I’m still taking advantage of your additional cores for path-finding and other CPU heavy operations. And as noted in the announcement, After the Collapse is able to simultaneously manage multiple separate areas, meaning that you’ll be allowed to monitor the people you send on scavenging or exploration missions. The game will come in both 32 bit and 64 bit flavors, not that I expect it to be extremely RAM hungry.

Getting the basics setup took a bit more time than anticipated, but not by much. I’m advancing at a decent pace and the code base is pretty clean. So I don’t expect much trouble in the coming months. I will post, in the coming weeks, design documents regarding the gameplay loop, settlers interactions, etc. to give you a better understand of my goals for After the Collapse.