Hi there, it’s time for another devlog detailing the progress made on After the Collapse, our post-apocalyptic base building game. This article is mostly going to explain the systems I’m putting in place to have varied and interesting survivors. For the newcomers, I would suggest to give the previous article a read first. I will also go through various improvements being made to the user interface and game systems. Enjoy!

A set of physical and mental attributes (strength, agility, ethics, social, etc.) will define your survivors. Those stats are used to define how they’ll perform in combat, when talking with each other (more on that later), and doing other tasks. It will also define how often they need to rest or eat, their total health, etc. In addition to these innate statistics, they have a list of skills for each job type offered in the game (like construction, cooking disassembling, forging, etc.) For instance a survivor with a high value in cooking will make slightly higher quality meals and faster than a complete newbie. 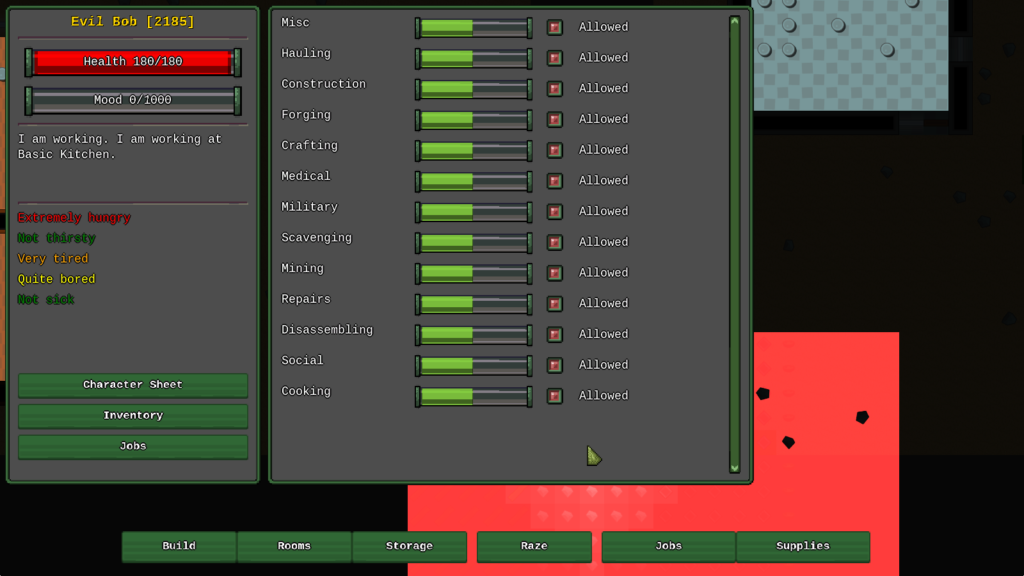 On top of those fairly standard systems, I added a very potent “trait” system. Simply put a trait can modify any innate attribute, job skill (even forbid a survivor from performing specific jobs), modify how often they need to sleep or heal. They can be positive or negative, strong or benign. They will also help in defining how settlers will behave with each others. For instance, people with a trait like “clever” will tend to dislike those with the “stupid” one.

Calling them traits is a bit of a misnomer. The same system will be widely used in all parts of the game. A hungry survivor will get the “hungry” trait, reducing his attributes until he can get something to eat. Same goes for all the other basic needs. Weapons, armors and consumable may also apply temporary traits to whoever is using them. Even the post-collapse profession and other education stats that are currently being implemented will be defined using traits. And when we get to define specific injuries or sickness, you can be sure it will done using that system once again (which is, of course, moddable). 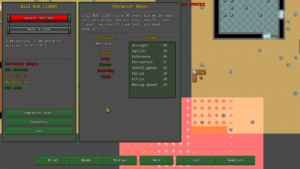 Finally, Survivors have a list of cosmetic attributes (age, sex, color, body type, and so on) for flavor sake. I might expand them latter on, to further influence relationships and behaviors.

While survivors will generally try to execute your orders whenever possible, they also have a mind of their own. They will seek to satisfy their basic needs (eating, drinking, sleeping, seeking entertainment) in priority whenever possible. As their leader, your main goal will be to make sure they can satisfy those needs by building the appropriate infrastructure. Otherwise, they might have a tantrum (breaking a few furniture), turn hostile or even die. To easily gauge how a settler is doing mentally, they have an happiness meter. Happy survivors get a positive trait slightly improving their attributes, while unhappy survivors get a negative one. A menu breaking down the meter in a more detailed fashion is, of course, planned.

When not executing your orders or satisfying their basic needs, survivors will generally socialize and use items that are available to entertain themselves. While socialization isn’t coded yet, I think I can start talking about it in general terms. Simply put, when 2 people are in the same location, there’s a chance they both start talking to each other. Each settler will have a list of things they like or dislike, defined (here again) by their traits. One settler will start talking about a subject they likes or dislike. The second one will check in their list if they agree, disagree or are neutral. It will result in a relationship boost or penalty between the two. The strength of it will be determined by their respective social attributes.

With time, some of the survivors might become friends or enemies. Friends will give happiness boosts when around, but if one of them dies, the other one might get very unhappy for a long period of time. Enemies will get happiness penalties when around each other, and they might even fight each other if sufficiently unhappy.

The general idea is to start with a relatively simple, but solid, system that I will improve and diversify over time.

I’m also starting to improve the user interface, adding colors, using a more legible font, and having menus that follow a consistent pattern and system. 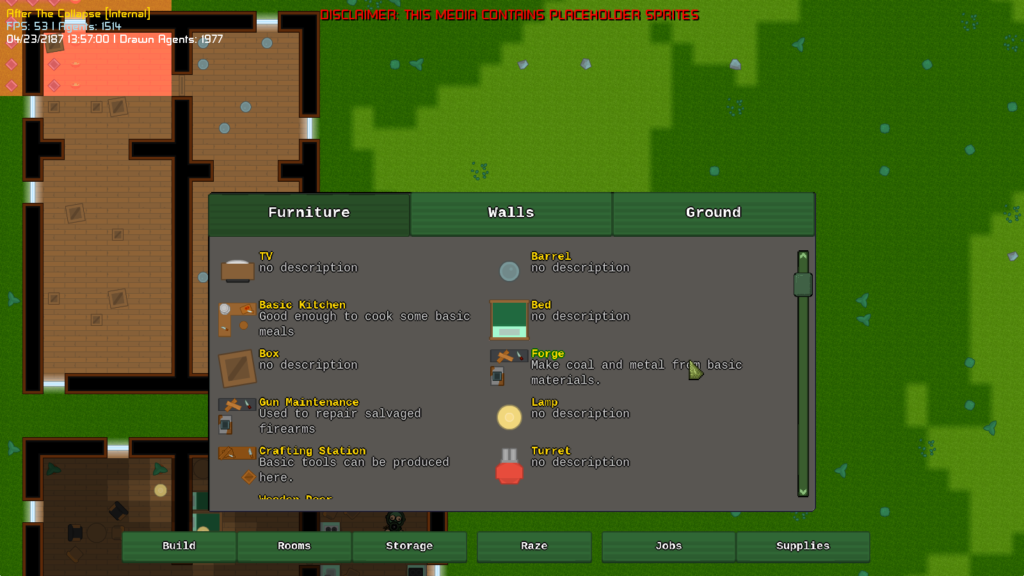 The build menu gets more colored items with a glow effect when mouse-hovering a specific items. The game also handles descriptions for items and furniture now. Do not mind the missing ones in the screenshot, most those items are placeholder. I will likely add a way to sort items by categories as the list grows bigger. 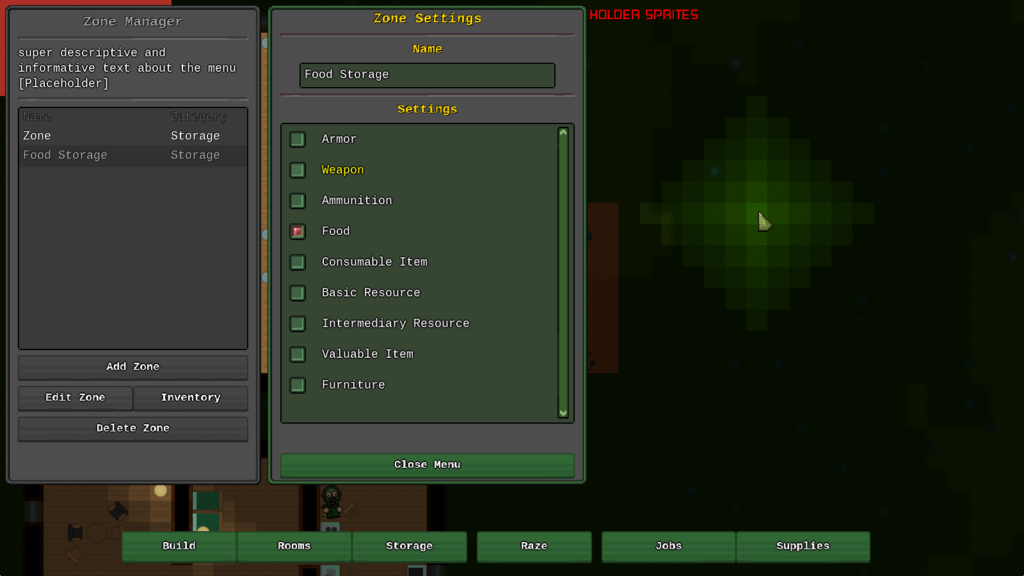 The storage zone manager got a makeover, with a more legible settings, decent looking scrollbars and generally a better use of the screen estate. Same goes for the factory settings menu and, as you have seen in the first screenshots, the survivor information panels. Most things also feature small help/info tool-tips. It’s still a work in progress, and many menus are still lacking, but we’re slowly getting there. 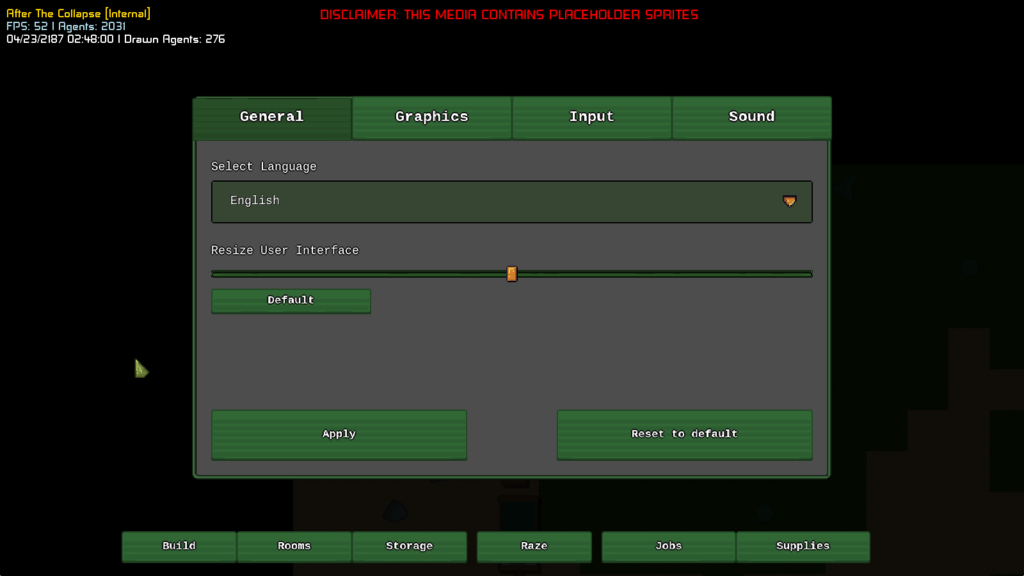 Finally, two good news as you can see in the screenshot above. First, the game will support multiple languages. Adding new ones is fairly easy, at least for the roman character set, and tools to add your own will be supplied. I will include English and French in the day one release. Secondly, the user interface can be scaled up and down, meaning that no matter the screen resolution you’ll be using, the UI should stay consistent and readable. If you prefer having small or big menu, you’ll be able to customize the size yourself.

And of course, I am also working on bunch of other things. We have a working “disassemble/raze” order now. I implemented consumable items (like, but not limited to, food). I’m also putting in moddable data files how survivors will handle each basic need. In the coming weeks, I will continue working on the survivors. I will also work on the animation system, and start adding content to the game.

One thought on “After the Collapse – devlog #4: Survivors and UI”