As promised, After The Collapse 0.5 has just been released. With a new underground cavern layer to explore and conquer, new mechanics and content, it’s quite a meaty update.  Let’s get to it 🙂 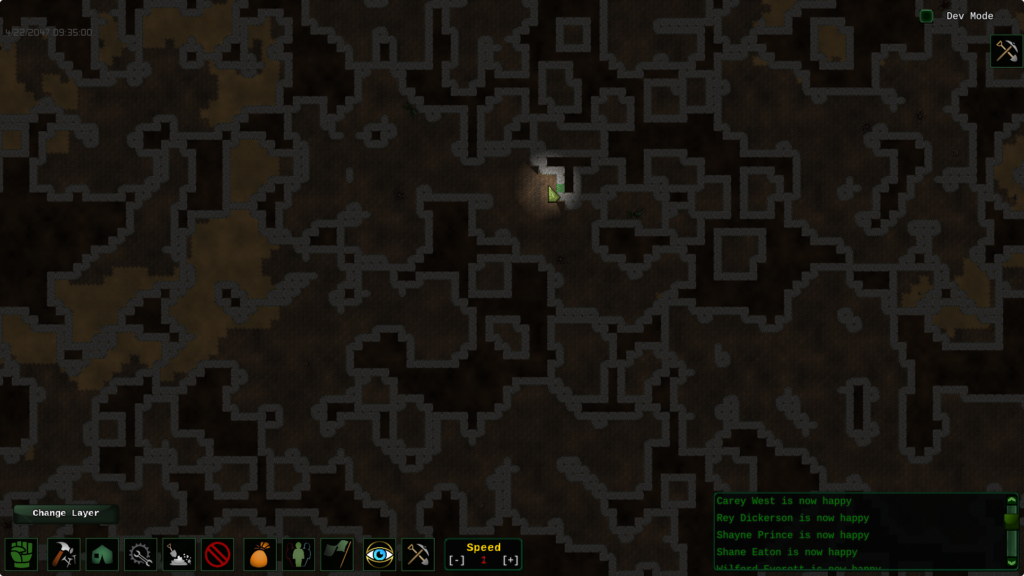 As promised, we’re no longer “just” a RimWorld clone (not that there’s anything inherently wrong about that). It is now possible to dig stairs into an underground area. Right now we only generate caverns, but next minor updates will add sewers and more variety to it in general. You can switch between the outside and the underground with the press of a key (or button), your settlers can freely move between the two.

Caverns are full of new (and old) hostile creatures that you can hunt for resources and food. They also contain randomly generated loot boxes. And they provide protection against some events and weather patterns. They are a reliable source of stone too. Which is great, as I made the metal recipe more stone intensive, and added the ability to build valuable items out of stone for trading purpose. Of course, you won’t be able to build solar panels or rain collectors in the caverns. That being said, it’s a perfectly viable option to build your entire base underground. It might not be something you can do immediately as it takes time, and the creatures lurking below are very hostile, but it’s entirely possible.

However, understand that this is a massive feature, it took a lot of time to implement. It’s also difficult to make sure every single little thing is still working as it should in this new context. So, yes, you will most likely find bugs, which is why we’re in Early Access after all :). Those bugs will be addressed through our usual regular patch schedule.

First and foremost, I have removed the pacifist trait and tuned down the depression state. Feedback regarding those effects have been negative and it confused the hell out of many of our players. As such, until we get until more complex social and mood systems, all your survivors can now fight, no matter their traits and mood.

More importantly, damage and armor systems received a small overhaul. Armors now provide a percentage-based protection against specific damage types (instead of flat). I also implemented a form of targeted damage. To put it simply, depending on the attacker’s Military skill, an attack might get negated by both the armors (headgear + body armor, as previously), the heaviest armor of the two, or the weakest one. The higher the skill, the higher the chance the shooter will target their enemy’s weakest point. Additionally, successful shots on the weakest part will increase the attacker’s Military skill. This makes soldiers and mercenaries much more potent in combat.

This is only the first pass at the combat system. Our next minor updates (0.5.x) will improve the UI, add specific systems so things like cement walls can no longer be punched in a matter of minutes, etc. 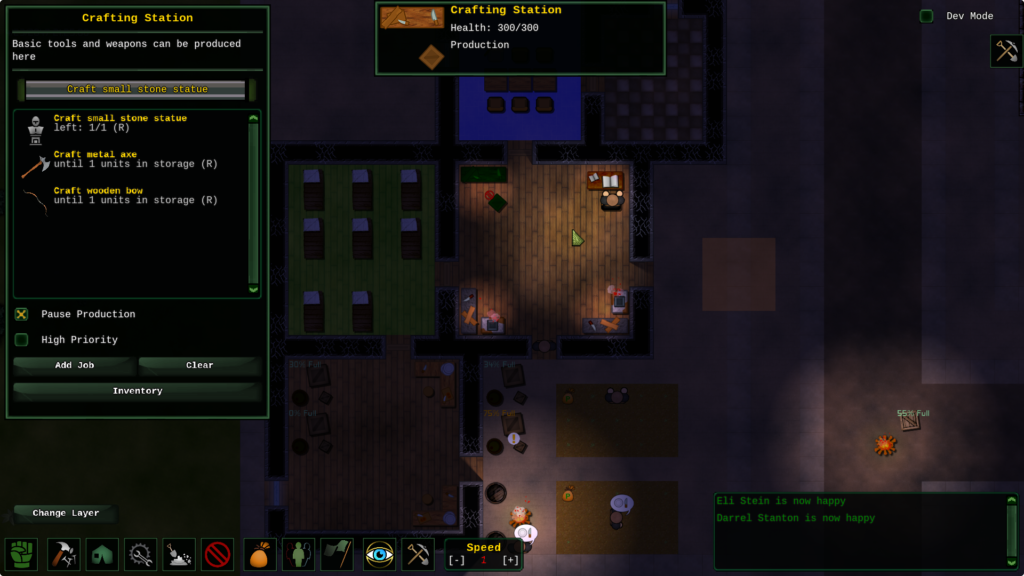 Until now, if you tried to completely wall off 2 independent groups of survivors, the simulation would completely break down. This is no longer the case. Survivors are now able to understand that they definitely can’t reach a specific storage area behind that wall. While it might not sound like much, with all those closed-off caverns it was a necessity. This will open up the game for way more advanced features (closed off buildings, fog of war, unexplored locations) in the near future.

I’ve also tweaked AI values left and right to improve the flow of resources. It’s not yet ‘perfect’, you’ll always have a case in which some settler is going to be ‘derping’ around or get stuck. It’s unavoidable, especially with all those new systems and a more complex map. But all in all, they should behave slightly better. Survivors will no longer occasionally get stuck inside building locations, they’ll get teleported out whenever it’s necessary. 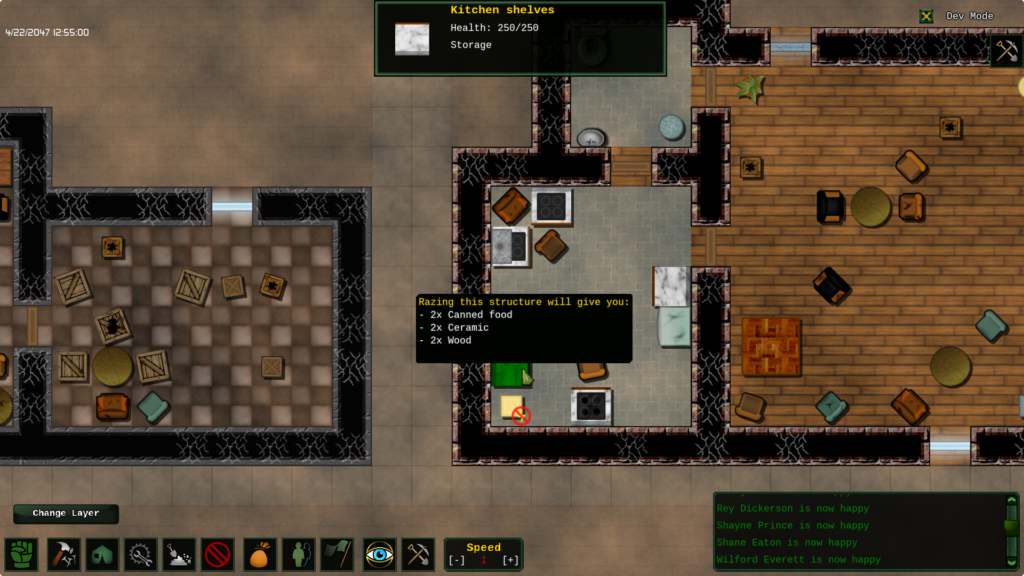 Not a lot of changes this time. I know there’s still work to be done, but our last few weeks have been so focused on the UI, it was getting urgent to add actual content instead. Still, I added a few useful things based on the most common bug reports. Paused factories, disabled power relays and disabled rain collectors will show a specific icon on top of them. Additionally, if you somehow wall off a depot completely with other depots or items, it will show another warning icon. It’s not much, but it’s a step in the right direction. Additionally, clicking on any map clutter/object will now show a tool-tip detailing what you’d get for razing this particular object. 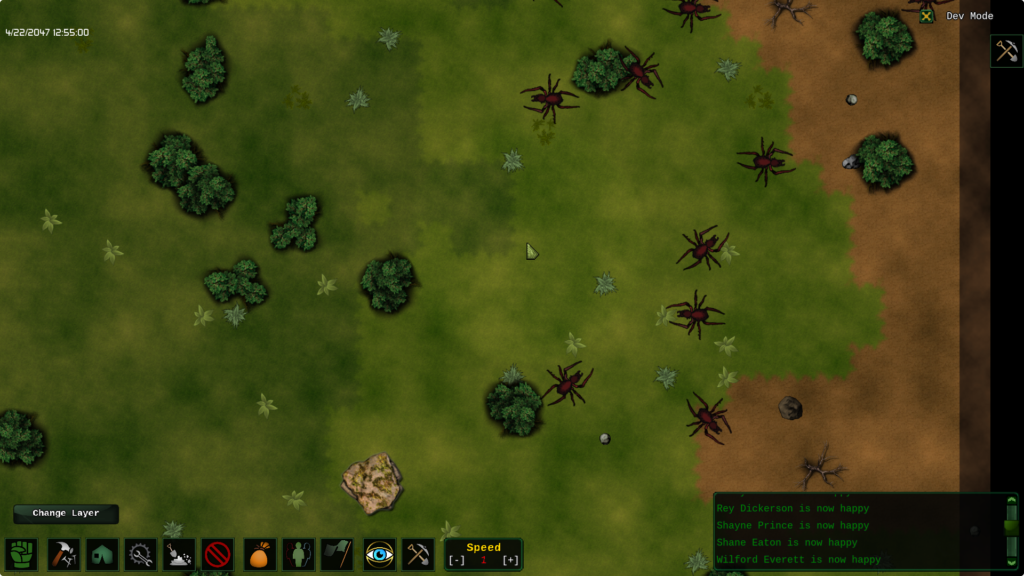 I added a specific AI for animals. Instead of moving straight toward your base like other raider types, animals will wander aimlessly until someone they see as an enemy enters their line of sight. They won’t purposefully attack doors either. Hopefully, players will use that to their advantage to aggro animals individually. To account for the fact that animals can technically stay on  the map for a very long time unless actively hunted, the event generator is no longer going to wait for all the “animal raiders” to be dead before resuming its normal activities (like it’s normally the case with standard raiders).

A lot of minor tweaks left and right. I integrated the cotton mod into the base game and added a recipe to convert the webs from fallen giant spiders into cloth. As such, you can uninstall said mod. The build time of rain collectors has been halved. Enemy stats have been tweaked and will follow a specific pattern (for instance, shamblers are always quite slow and quite strong). Damage weapons, armors and headgear now have their own “Damaged Gear” item category. Leaving the new trading good (stone statues) as the only item in the “Valuable” category (for now). Event and expedition rewards have been tweaked to account for that new category. I also added stone based furniture: door, chair, table (masonry tech). Speaking of door, the metal door is now stronger, with 1000 hit-points, with the stone door at 800 and the wooden at 500. 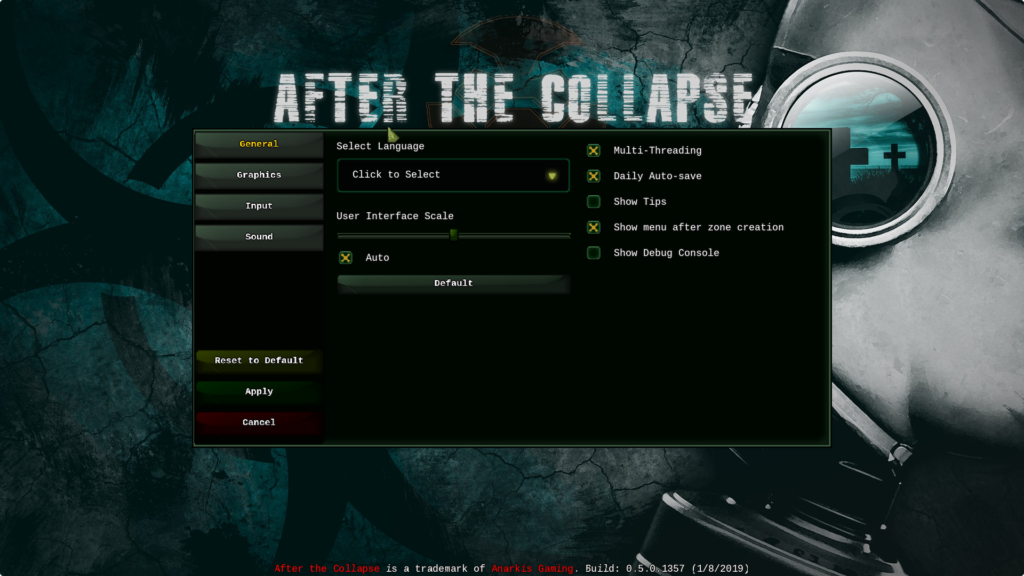 As you can expect, this version is more memory and CPU intensive than 0.4, especially on large maps. I optimized some other parts of of the code to counterbalance it, but if your computer was struggling to run ATC before, it’s going to be a bit worse with this update. However, I have good news too. If you go to the game’s settings you’ll see a new “multi-threading” checkbox. Ticking the box will dramatically boost the game’s performances, as each layer (cavern and city) will run in it’s own thread. However, I’m not entirely sure it’s perfectly stable. I could get the game to run for hours without any issue, but implementing proper multi-threading is always a challenge so I do expect to find people who’ll occasionally crash when this option is toggled on. As such, I’d suggest to enable this option ONLY if you’re experiencing severe performance issues.

On the memory side of things. Those new features are quite hungry. While the  underground layer is still available for 32 bit systems, I cannot guarantee the game won’t run out of memory (for the 2 of you still on a 32 bit OS, I’m very sorry, but I can only do so much magic) when used. Note that this feature is entirely optional.

And, of course, I fixed some problems encountered in the previous versions. Pathing issues for the most part, alongside some trait related problems (same wound could be applied over and over leading to ridiculous situations with people having 20 broken arms). I also fixed a few typos, but we’ll still have to do a full “engrish fixing” pass at some point.

There’s still a known path-finding problem in this release. It’s fairly minor and a fix will soon be released. It’s just this kind of trivial gameplay problem with a complicated code fix. Simply put if you build 2 different stairs leading to 2 different parts of the cavern that would otherwise be walled off, settlers will often get confused and pick the wrong stair (they’ll pick the nearest one). It’s not a problem when both stairs lead to the same location in the cavern so, while waiting for this fix, it’s best to expand from within the cavern itself instead of having multiple small basements.

We also have very minor graphical glitches with light sources and cavern walls, and when switching from a layer to another while the game is paused.

While this update is not as large as I wanted it to be, I’m happy with our progression so far. I would have liked to include proper multi-unit selection (during combat), but that will have to wait for a following patch. In any case, I’ll let this version run for a week or two to get a feel for what are the most urgent concerns, then we’ll get to the sewer generator and combat UI rolling. After that, we’ll get to more diverse content. Proper fire, proper farms, sealed-off buildings, and everything else that was planned for the 0.5 branch.

3 thoughts on “After The Collapse 0.5: Underground Update”