Hey there, It has been a while!

My apologies, it has been difficult to find time to post here on top of Steam, itch.io, and other mediums. I’ll try to get back to the monthly schedule. In any case, this is a perfect time for a progress report: our 0.5 branch is close to completion and we’ll soon be starting to work on the 0.6 branch. This gives me the opportunity to explain what’s coming next for After The Collapse. However, before we get into the progress report proper, I have a few website related announcements to make.

We’ll be dropping a few features in the coming days. Firstly, as you probably already know, Google Plus is closing down. As such, we’ll no longer be posting there. As per usual you can still follow the website using a feed reader (like Feedly), by registering to our mailing list or by following us on twitter. Secondly, our forum is going to close down. It never was really active, mostly because my schedule is already pretty much full. So instead of wasting more time maintaining it, I will be deleting it (which should incidentally improve the website’s performances). If you wish to talk to us, I would suggest to use our discord, the steam forums or post comments below our articles instead.

After The Collapse 0.5.x

We’re getting close to feature complete for the 0.5 branch. Let’s recap our goals:

The 2 layer system (over-world and underground) is working pretty well. While there’s always room for improvement, we have pretty decent sewer and cavern generators, which I will consider “good enough” for now, we’re still missing presets/premade rooms but it shouldn’t be much of a problem to implement. That wouldn’t do if I was making a rogue-like, but for a terrain which main purpose is to be dug into, it’s more than good enough.

We’re still missing the ability to start in an underground vaul… cough.. bunker, but it shouldn’t take too long, as all the required building blocks are already there. Soon, the game will offer different starting presets (like I used to do in Unending Galaxy) on top of the usual “custom game”.

Before 0.5, farming was extremely easy to do (put a farm down, and voila!), pretty boring, and yet wasn’t producing enough food to sustain a large base. Thankfully, all of that has been fixed. I added a bunch of new crops, which are producing more bank for your buck, and added water and lighting requirements for the plants alongside a health meter determining how much they produce. While some of the new crops can be grown underground from the get go (shrooms), most will need to either be grown on the surface of be supplied with a light source. 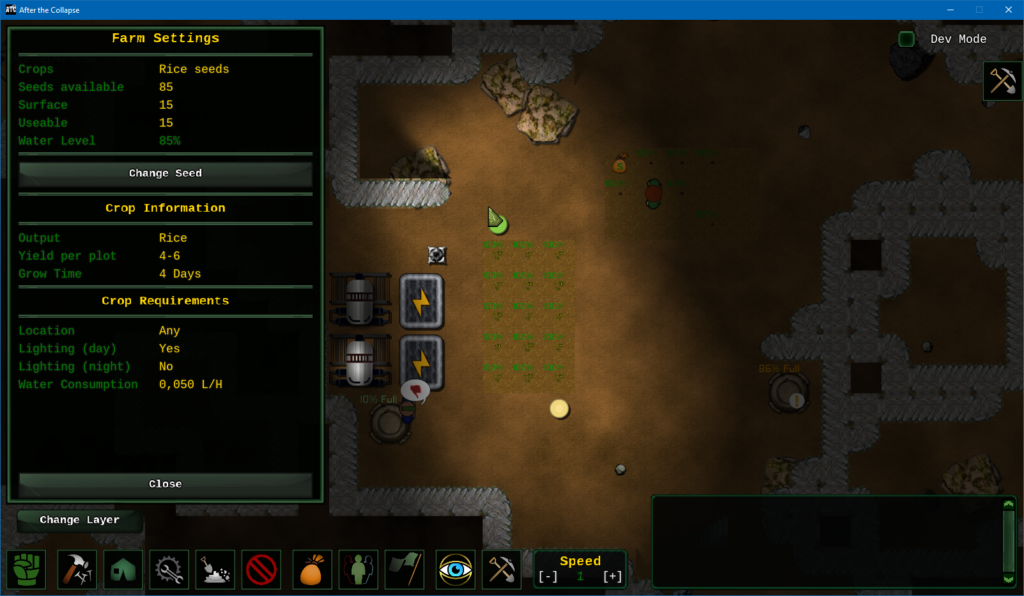 Having a much more efficient farming by default unlocks the ability to set up special events like a poor harvest, plants getting sick or even pests attacking your plants without overly punishing the player. Those events have yet to be implemented as I want people to get used to the new system first, but at least some of them will be implemented before 0.6.

However, right now, there’s still something annoying regarding food production, namely the fact we’re relying entirely on preset food recipes. By that I mean that each time a new crop is added, I need to add one or multiple new food recipes to each kitchen type station. With only 5 or 6 plants, it’s not really a problem, but it doesn’t scale very well. Incidentally it makes food mods incompatible with each other.

To get around that problem, I’m in the process (technically, in-engine, it’s nearly complete) of adding generic recipes. Simply put, plants and other food ingredients will be getting a nutrition value and a type (vegetable, meat, etc). Additionally, all kitchens will get basic generic recipes (“small/medium/large meal”) with simple requirements, a large meal might need 2 different ingredient types and a total nutrition value of 500 for example. That way, even if there’s no specific recipe for a given plant, it can still be used to make generic meals. And, yes, it’s very similar to what Dwarf Fortress & Rimworld are already doing.

This is the last big missing feature in 0.5. So far, every single animal you’ve met has been hostile. While, sure, they can be killed for food, it’s not a reliable way to sustain your colony. Spawning neutral animals isn’t a problem in itself. Making them friendly/obedient through taming should be relatively straightforward, It’s just another job, skill and button to add to the game. Nothing tremendously difficult, heck, some could even become military units with very little change in the code. The tricky part is mating, growing and feeding them.

For the feeding part, the idea is to have a new crop used to feed the cattle. Said cattle will stay in a new specific zone and a specific game activity will be added to take care of them, bringing the food from the farm to the animals. The “animal zone” will have different settings, like “butchering X animals each time we get over Y population”. So far so good. Well, it might get a bit tricky to balance properly in order to make that a valid option compared to pure farming, but that’s a secondary concern.

Mating, and more importantly, handling children, is a bit more tricky technically. Our rendering system for NPC isn’t really “scale” friendly currently. So rendering children isn’t as easy as rendering the same NPC but smaller, as it would mess up the animations. It’s probably a problem I will initially dodge by rendering full scale animals independently of age. I’ll get back to it later down the line. The important part is to get the feature itself rolling, rendering can always be improved later. It also has implications for critters on the map (especially underground), as I’ll have to decide if I want them to reproduce and keep their population under control.

Most of our remaining goals for 0.5 were implemented. Even with the multi-threading option enabled, the game is pretty stable now. I cleared more of the recurring annoyances and AI issues. Sure, your survivors aren’t exactly Einstein and will occasionally take longer paths than they should. But, all things considered, bases are much more efficient than in the 0.4 branch. Plus, the ability to recruit new people through expeditions made it much easier to grow the base to our planned scale (20-40 survivors). Combat handling and AI is still a bit sub-par compared to what I’am aiming for. Yet, with the addition of lasso selection, the ability to set automatic “go to” location for each survivor when enabling combat stance and factoring weapon penetration vs material strength in damage calculations made a world of difference compared to previous versions. 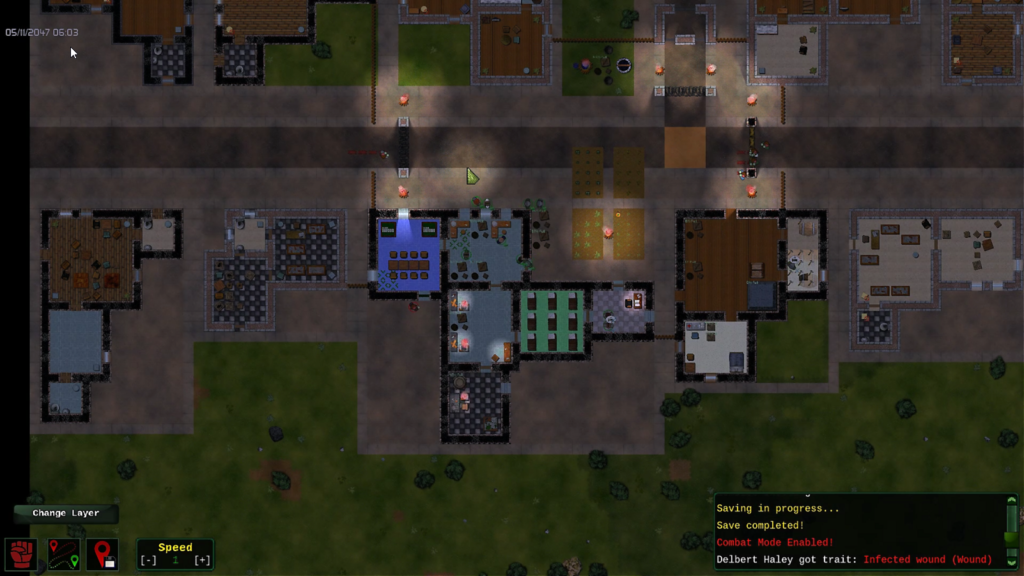 There’s still a few minor improvements I would have liked to add to this branch. Events are too basic, and since the combat update, enemy raids are too easy to deal with. Simply put the game moved from punishingly hard to too easy with this update. It’s nothing to really be concerned about at this stage. There’s a lot of features I still need to implement before even thinking about balancing the whole thing anyway. Performances are a bit on the low side and memory consumption a bit too high currently. It’s nothing really worrisome, as there’s still a LOT of room to improve all that.

After The Collapse 0.6.x Roadmap

We’re kind of at a crossroad now. We can focus on ‘digging down’ or ‘climbing up’ basically. By that I mean that we can continue to make the base building simulation more intricate or we can begin to design the world map and factions. Of course, both are linked, focusing on one thing doesn’t mean nothing will be done in the other category. It’s just a balancing act.

Right now, I think the proper path is to focus on the environment & world map in 0.6. Firstly, after several months working on the base building itself, tackling something a bit different will be a much needed change of pace for me. Secondly, a lot of planned features (and even partially implemented ones) rely on the existence of a world map. For instance, until we have a world map, implementing proper factions, trading, and more advanced expedition systems would be pretty difficult. Finally, from a pragmatic angle, the faster all the major game systems and unique features are, at least partially, implemented, the easier it will be to promote.

So, the idea for the 0.6 branch is to implement the following major features:

Regarding the base building simulation, outside of the general maintenance stuff (improving UI, performances, adding basic features, etc.):

Of course, those are general pointers. The roadmap is not entirely set in stones and might be slightly adapted based on how the development is doing.  Anyway, I think that’s about it for now!