This update is adding a couple new very important features to the base building game. Namely private property, room quality, and the break room. It is also improving the user interface and menus while fixing a bunch of minor bugs that have been present for a while but for which I couldn’t find the time to properly fix until now. Simply put, 0.6.1 should feel more professional than any of the previous releases and leave a much better first impression to new users.

After looking at a bunch of saves from users, either beta testing or bug reports I noticed a trend. People tend to build small bunkers and never really expand after that, waiting for the research to finish. And it’s true that currently, the game doesn’t really gives you much reason to. Well, things are changing. Survivors will start requesting individual rooms, but not immediately. The way I see it, there’s already enough things to do in the very early game, and forcing the player to build extra individual rooms on top would be a bridge too far, especially with the current mood system. 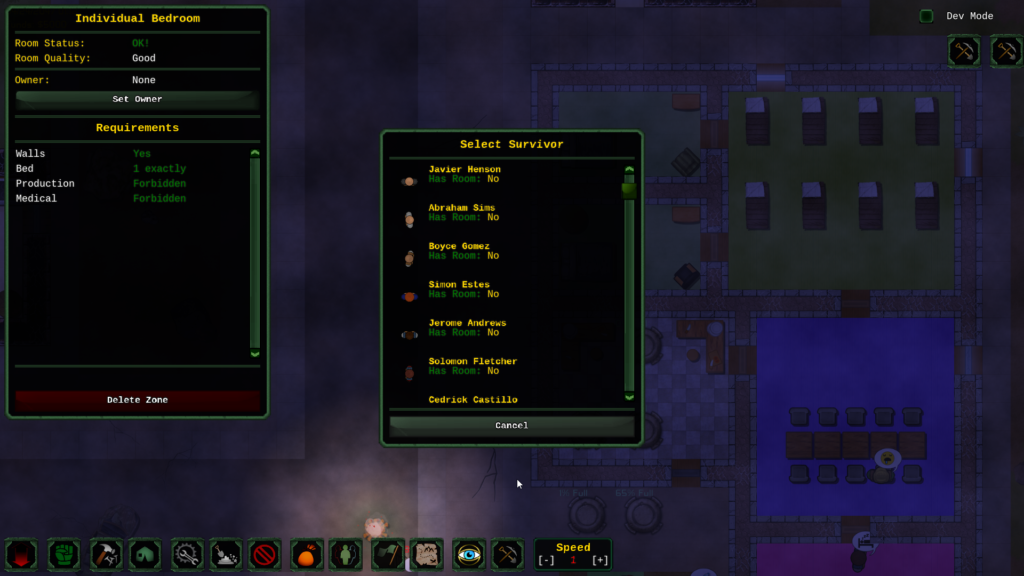 So, instead, as the game progresses and survivors complete tasks, they will gain “experience points” in quantities proportional to said tasks. When survivors get past a specific amount of points, they will gain the “Experienced” trait. It comes with a small attribute bonus (faster, better work ethics) and a minor mood malus. More importantly, it makes survivors with this trait request their own individual bedroom (more on that below). Not satisfying this request will make them extremely unhappy. The experience gain has been roughly calculated to generate your first “experienced” survivors somewhere during the mid game (a bit after electrical tech depending on what you do), when there would be very little to build if you’re not actively trying to grow your population count.

Individual bedrooms are new rooms you can build. They need walls and a bed, of course. You can attribute a owner to those rooms via the associated menu (which got a face lift in the process). This new zone type also introduces the second new feature “Room Quality”. Until now, furniture served very little practical purpose. Things like sofas, tables, shelves, chairs, entertainment stuff now come with a “decorative value” (visible in the build menu) and will improve the quality of the room they are in. In the case of a bedroom, the higher its quality, the higher the associated morale bonus for its owner. 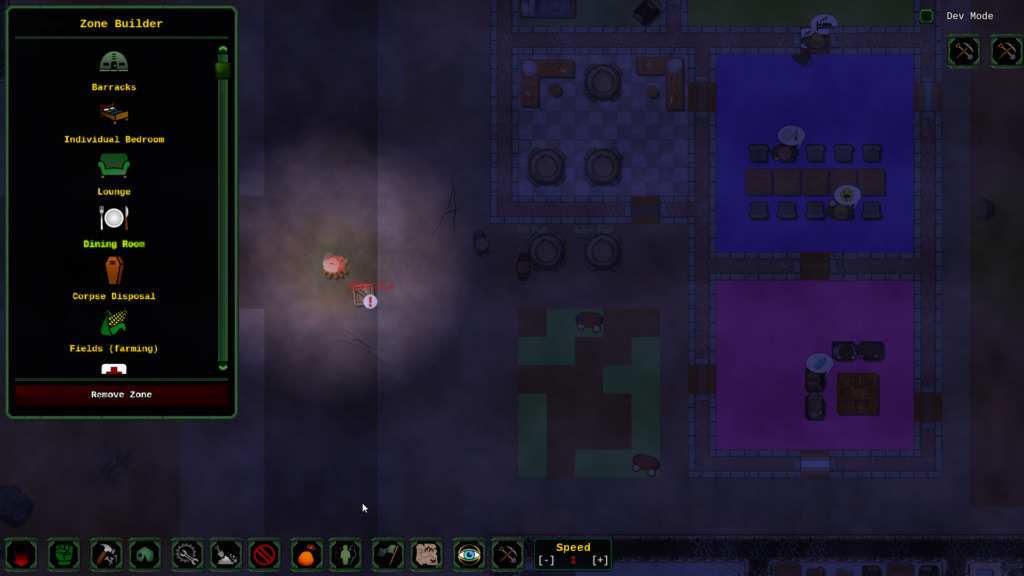 I am also introducing another zone, the Lounge. Lounges provide a place for your survivors to hang out when they are on break (instead of moving around and occasionally getting into unnecessary danger). More importantly, they also provide passive entertainment (proportional to the room’s quality) to whoever is inside.

While it doesn’t sound like much, it’s an important step. I now have a framework for private property, room quality and the ability to tie traits to room requirements. All of which will be expanded over time, obviously.

I know this section isn’t that exciting to regular users, but it’s a necessary step. Plus, some of the changes provide some nice quality of life improvements.

I put all that wasted space on the title screen to good use. The most recent articles about the game (from our website) are now linked on that page, clicking on a title will open the relevant article in your favorite browser. For those who really don’t like the news feed, this option can be toggled off in the general settings.

The save and load menus also got a redesign, and newly created saves will display more information (in-game date, time and population count, on top of the old save date and player faction name). Speaking of saves, the game is finally asking if you want to save before quitting. I know, it’s long overdue.

Contextual help menus / game tips are no longer “always on” or “always off”. Instead each window has a checkbox to never show the tip again, even in future games. It can be reset in the settings. There’s two reasons for that. One, it’s standard practice in gaming. Two, and that’s the important part, regular players tend to disable all tips because they have seen them 20 times already, as such when new important ones are added in new versions of the game, they miss important information. Now, instead, they see the newly added ones at least once while keeping the old ones hidden.

Many of the older menus got a face lift, adding a few colors here and there, increasing the amount of information, and so on. Nothing major, and there’s still some work to be done in that regard. But it generally looks better.

And there’s a lot of changes, tweaks and fixes that were in my to-do list since forever but never got the time to get to them until now. The command to remove ground tiles which has been left unchanged since 0.4, got updated. It’s now working properly and giving the same feedback as other orders (hammer icon over the tiles marked for removal). The camera movement is now constrained, and you can no longer scroll forever out of the map. Eating animation is no longer using the “dancing” animation (I kinda had a fondness for that one). Camera jumps in the tutorial no longer make the screen flicker for a few frames. Save/Load screen auto selects the last save. You get the idea, polishing the rough edges. 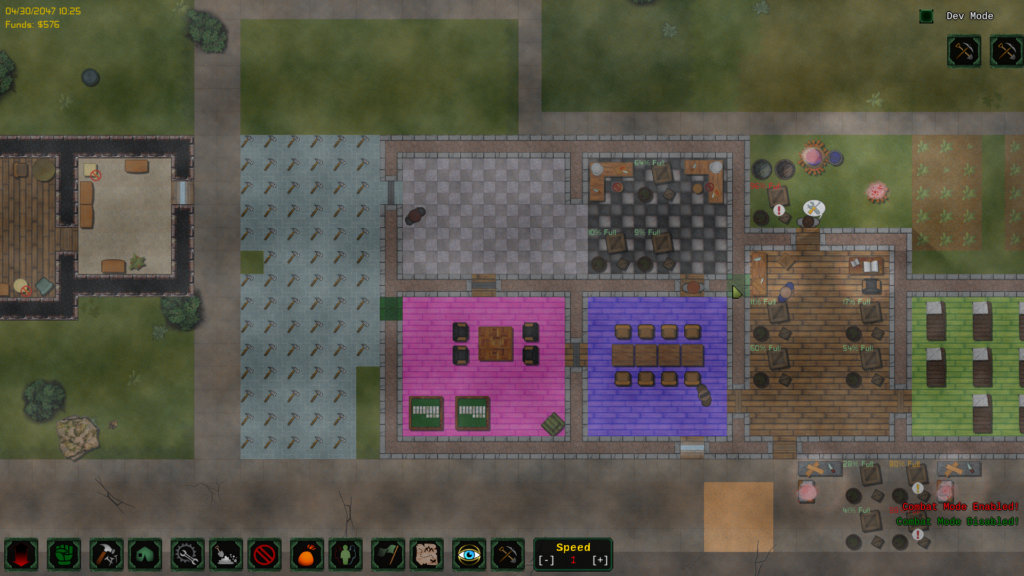 And there’s a few proper bugs too. Crash when saving/loading after the tutorial ends, despite the game telling you that you can. World map showing lighting and shadows from the screen you were in. Various problems when switching resolution in the middle of a game.

Check the full changelog at the bottom for the full list.

This version, written partly during what was supposedly my vacations, is mostly consolidating the base game’s design and flow. The idea was to get rid of some of the “technical debt” that accumulated in the last year before going forward with the development. I am still planning on maintaining my plans for the 0.6 branch. The next updates will mostly focus on implementing the “out of base” raids and expeditions and other world map interactions.