The new major 0.6 update, “A Bigger World Out There“, has just been released (and should be delivered to all stores today).

It took a bit longer than anticipated, and I apologize for that. Heat waves, summer and writing complicated code don’t mix very well together. But we got there anyway. This version introduces the world around your playable area. As with every other 0.x.0 release, it comes with new base mechanics and systems we’ll be building upon for the rest of the development cycle. This article will go over the most important changes and what’s planned for the next updates. The full change-log is located at the end, as usual.

Just before we dive in, I have some good news! Valve has recognized After The Collapse as a ‘real’ game, meaning that we will be adding Steam Cards and more achievements in the near future!

Important: 0.6.x save-games are NOT compatible with previous versions of the game. On Steam, you can use the properties / beta tab to roll back to 0.5.9 so you can finish your game first.

The inclusion of an overworld is 0.6’s main new core feature. It gives the ability for the player to pick a spawn location directly from the overworld map instead of using the custom map generator (which, of course, is still available). The map itself is a bit bare-bone but we’ll improve that over time. The important thing is that we now have a framework for interactions between your settlement and the world at large. The graphics and menus are pretty much place-holders at the moment. They work, but the design is temporary. 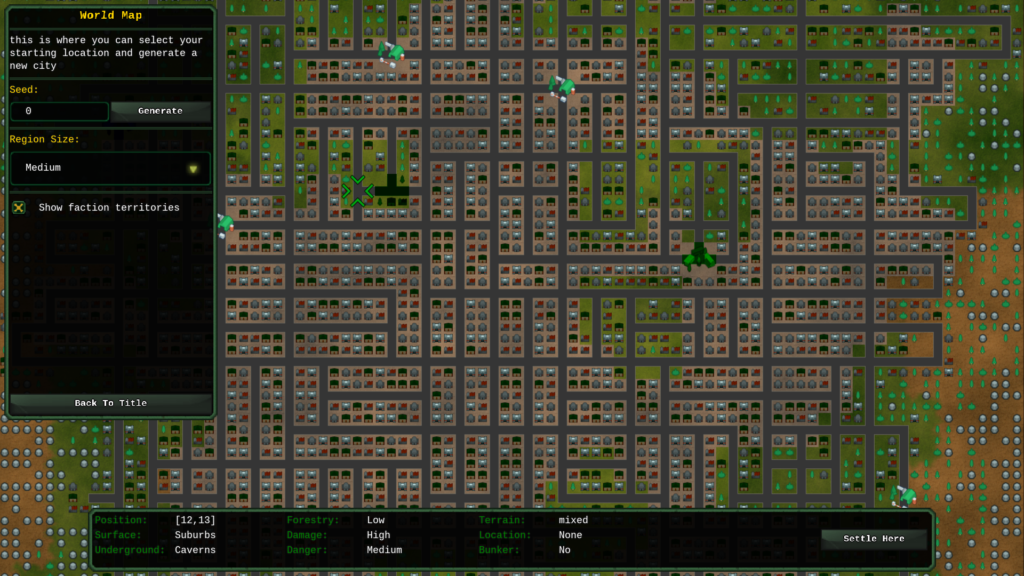 Generally speaking, the closer you settle to the center of the map, the more damaged and infested will be the buildings you’ll encounter. I will be adding filters to make it easier to find the “perfect” place for your settlement in the next update.

With the new overworld, 4 proper factions have been implemented, each faction has its own color, equipment, and taste when it comes to trading. Right now you can interact with them in a few ways through the diplomatic menu (you’ll need to unlock the radio tech first). You can improve your relation with them, for money. If the relation is high enough, you can ask them to send a trading caravan your way for a small loss in relation. And you can just decide to piss them off (for free). 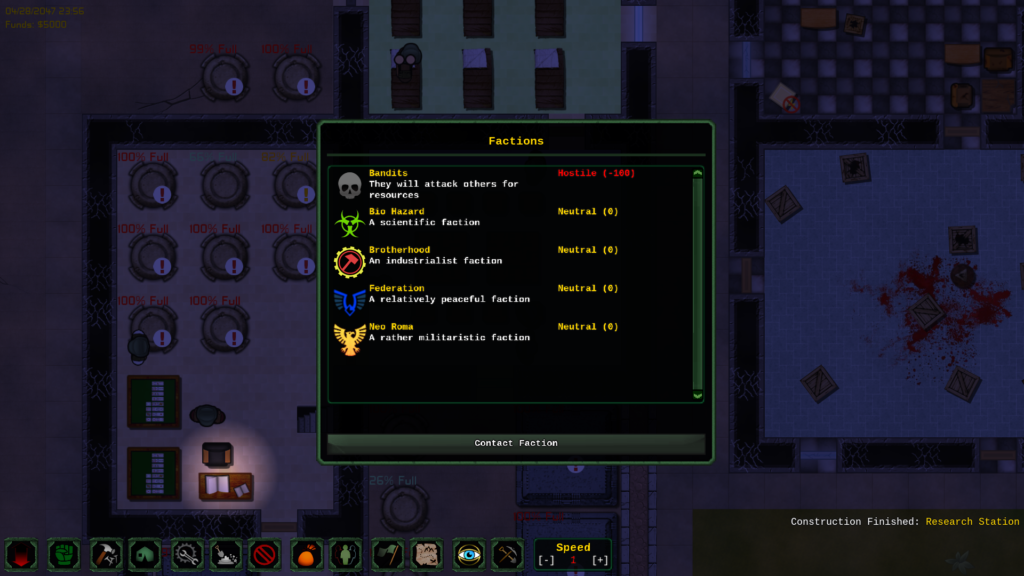 Right now, having a very positive relation with a given faction offers no particular advantage. That will change in future releases. However, having an hostile relation with a faction means that they might raid your base. Each faction use different raiders with their own uniforms and mid/high level equipment. It might be a decent late game strategy to anger a faction so they might decide to raid your settlement. Wipe out the raid, collect the loot, use it or sell it back in exchange for more useful resources. That being said, faction raids are no joke, they will come in large numbers (similar to your own colony size), and put standard bandit raids to shame. 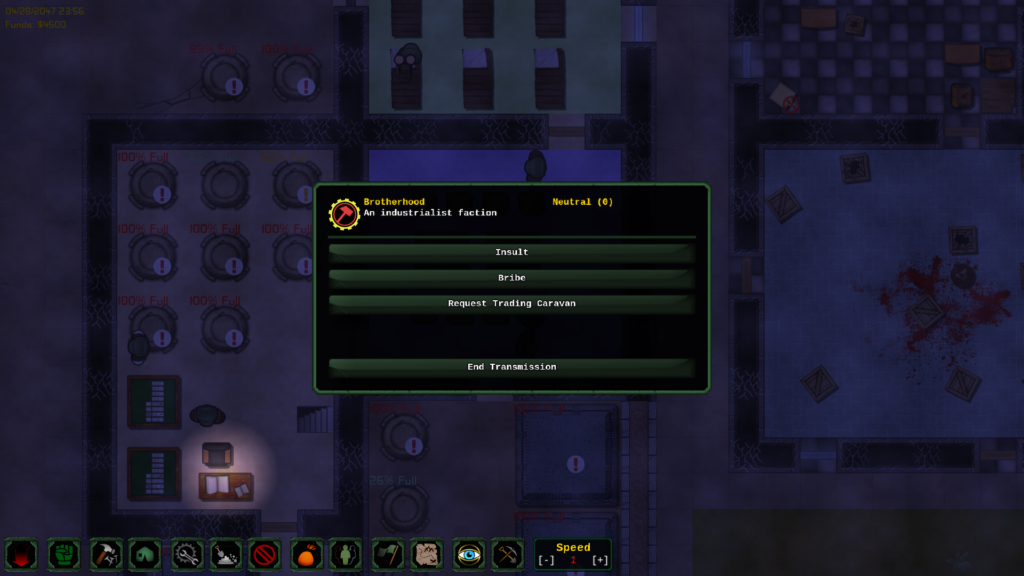 For the more trade oriented players, you can request (after unlocking the radio technology) trading caravans from other factions. Each faction specialize in a different domain. Note that the distance between your colony and the faction you are trading with will determine how long it will take for the caravan to reach you. You can opt to kill the traders for free resources, but it comes with a massive relation penalty.

And finally, it is possible, still through the diplomatic menu, to ask bandits for a truce. It costs a hefty sum of money, but they won’t attack you for 15 days. Of course, you have no way of knowing if they were planning to do so or not, but it’s a good way reduce the size the pool of dangerous events. This particular feature will most certainly be tweaked later, when raids get separated from standard random events.

Of course, factions are not very fleshed out yet, and the menu is quite minimalist, all that will grow over time.

We can now generate maps with L shaped roads and dead ends, features that are made accessible by selecting such a map in the overworld. Additionally, maps without roads (outside of the city) may feature mountains, similar to what you see in the caverns. This is, however, a very early version of that feature, as such, the map might look a bit weird. You might have to dig through the mountain to access a house, that kind of weird. 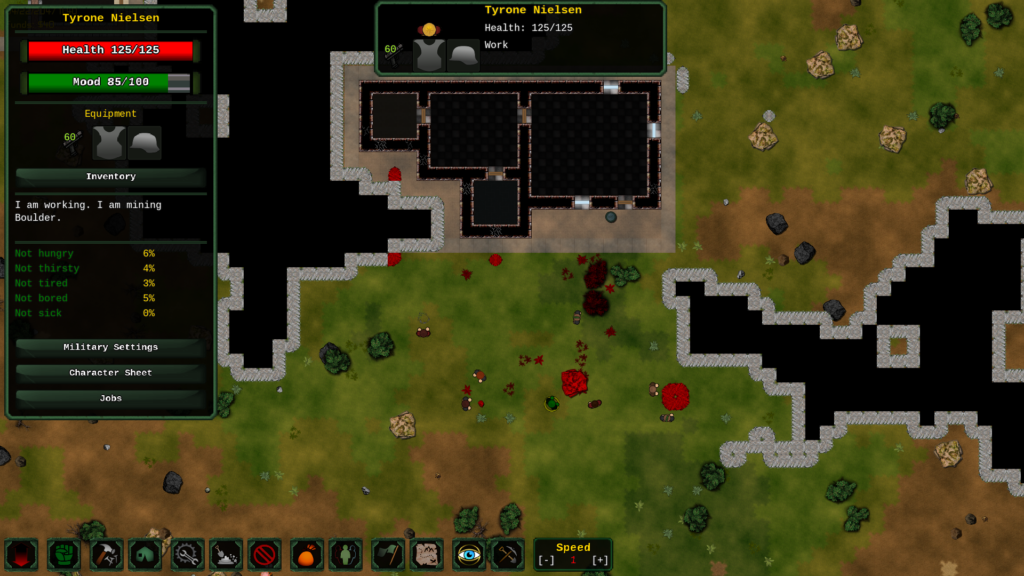 The recently introduced underground bunkers can still be settled, or left unused (in that case, crazed survivors will inhabit them). They have been overhauled to make sure the electrical grid is properly connected. 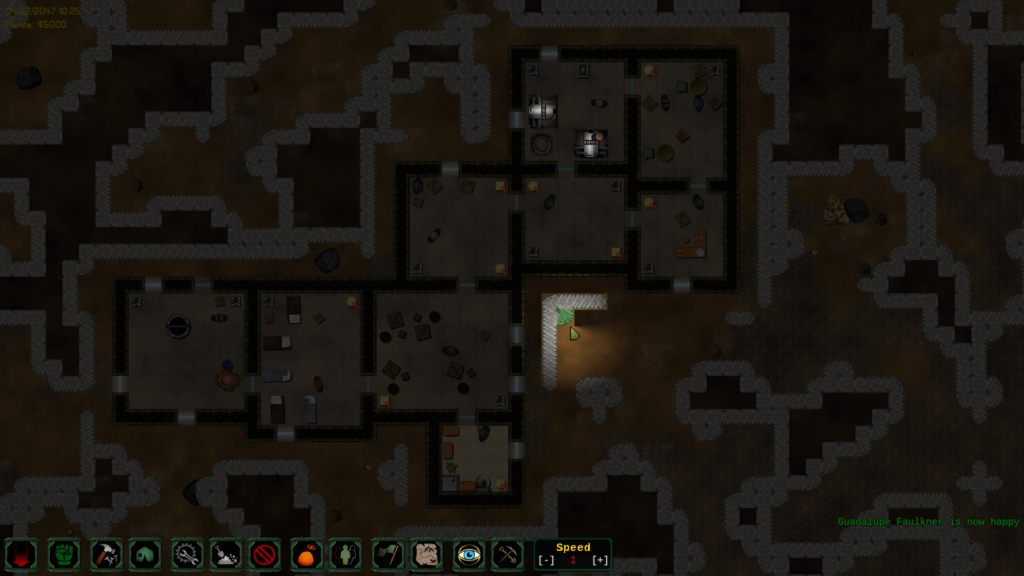 Last but not least, there are also “military base” map types. A word of warning, those maps are technically not meant to be settled, and you will get a warning if you try to settle there. While the buildings are chock-full of loot, they are also swarmed with automated turrets and hostile creatures. Military bases are always medium sized, independently of your settings (it’s a limitation we’ll try to remove later). Military bases have been integrated a bit early, just so people can toy with them. But in future updates, it will be one of the destination types you can claim for resource through your own raids. Basically, those maps are meant to be conquered more so than being settled upon.

There are a few other things, but nothing major. Improving and designing procedural map generators is a slow and complicated process. As such, progress will always be a bit on the slow side compared to other features.

As usual, there are a lot of less “focused” improvements and fixes.

Firstly, raiders are much more clever when it comes to bypass your defenses. While they still won’t destroy walls on purpose, if there’s a door leading to the inside of your base, they will find it and break it. They will also manage to enter your underground bunker with ease if there’s a stair leading to it. Note that animals and most zombie type enemy raids aren’t concerned, it’s only for raiders with a “brain”: bandits, tribals, faction guards, former soldiers.

Other “ease of use” changes include a new “slow paced” difficulty level (events are less common). The UI no longer exits placement mode after setting up a wall or an area to raze/cancel/repair (it acts the same as with furniture, right-click to exit), which is very practical when looting building or building complex wall systems. The “build” menu also remembers the last tab you’ve been on, making it much easier to place multiple things in a row. And you no longer need to maintain [shift] pressed to rotate your items by 45° increments, it’s now the default behavior (sorry old users, you’ll have to break the muscle memory, I had to as well :p)

And, of course, all the reported bugs seem to be fixed, but I’m sure you will find new and interesting ways to break the game. I don’t expect many major issues, but I don’t doubt there will be a few hot-patches in the coming days, as usual.

As I don’t like to over-promise or put myself in a situation where I would be forced to do something that would be better implemented at a later stage, I will keep to the general direction I intend to follow in this branch. Anyway, the 0.6 branch will mostly focus on adding more map types and more interactions with other factions and the overworld.

I will be adding the ability for you to raid and control special locations and extend that option to the AI factions as well while increasing what you can do on the diplomatic front. Later on, you’ll probably be allowed to resettle in a way or another. The ability to send troops to other parts of the map and control them is a priority as many of future late game features will be relying on it.

Faction specific events (other than the raid when you’re at war) will be added too, like the ability to recruit specialists for money, or offer asylum to an escaped prisoner at the risk of losing reputation with a specific faction. More “region specific” events are planned too, but we’re not there yet.

As usual, I will continue to improve the “base game” itself, but that’s not the major focus here.

As already explained in a previous devlog, we’ll be increasing the price to $10.99 (from $9.99) during the development of this branch. Probably soon after having made sure that 0.6 is stable. I might wait for the player raid feature to be implemented, but that will depend on how much time it will take.

Another thing, we have to stop supporting the 32bit version fully. With the addition of the overworld, it’s no longer possible for us to guarantee that the memory usage stay constantly below 3GB. The build will still be updated, but we won’t provide support for it. Good news is, according to our Steam metrics, not a single one of you is using the 32bit version anyway 🙂

Finally, we should provide a small update in a week or two (independently of normal development) unlocking steam cards and more (valid) achievement for Steam users. The game did pass Valve’s internal metrics and qualifies as a “real” game now, with all the perks coming with it!