After The Collapse 0.7.1 has just been released. This first major patch is heavily re-balancing the early game and tech tree while redesigning the map, adding genetic(ish) animal breeding, and overhauling the way expeditions are handled. This article will detail the major changes. As usual, for a complete list, refer to the changelog at the end of this article. I however, strongly suggest regular users to read this article.

I heavily reorganized the tech tree. My goal is to make it easier for newcomers to navigate it optimally in the early game while making the late game technologies harder to bee-line to for the veterans so they don’t skip as much content as they could. Some “free” technologies like hospitals, medical stations and repair zones have been locked behind techs to prevent new players from wasting their critical first few resources into things they’d only need much later down the line. 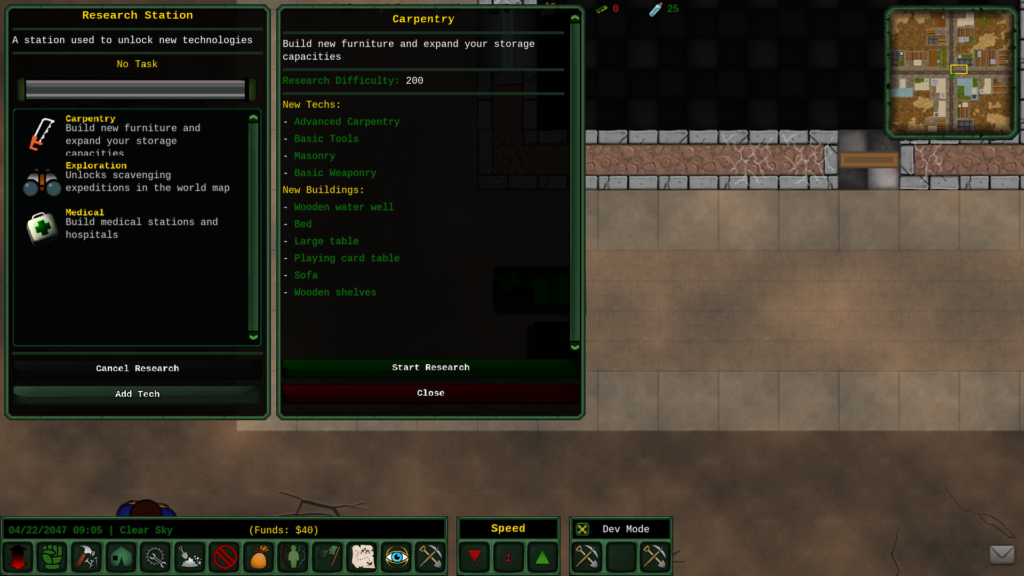 Now “Carpentry” should always be your first tech to research unless you’re extremely experienced with the game’s systems. It unlocks most of the essentials for a self sustainable early base, including an early low efficiency water well. Masonry now requires carpentry first. The main trunk goes from carpentry to masonry to metallurgy to construction, with branches going out at each step. I also added a “Power” technology between metallurgy and electronics. This is where you can start building coal-based power generators, get the radio tech to conduct diplomacy, and a few other features. It also unlocks the tinkering station, where you can build the generator (moved from forge). The “Electronics” tech comes later and takes more time to research.

The “Melee weapons” tech was renamed to “Basic weapons”. It needs carpentry, and provides crossbows and melee weapons (which all got a damage boost) so you can fend off your first few raids without having to rush pipe weapons. I slightly pushed back pipe weapons, and again, made their damage output a bit better. Modern weaponry maintenance and ammo production has been pushed back a lot to make sure that pipe weapons can be considered a viable choice by the player for most of the mid game.

To stress out the importance of early weapon tech, the weapon selection your settlers can spawn with is much more low tech. While it’s still possible for the occasional settler to spawn with a standard gun, most will start with pipe pistols and melee weapons. Same goes with armors.

Those changes are still a tad experimental. I did test them through a couple full game-sessions but I have no doubt that it will require further tweaks based on your feedback.

It’s not a secret that the expedition planner was kinda clunky. You’d click on the table, click on menu, click again to get on the map to select a destination, and go back to the menu all that to select a destination. With 0.7.1, I removed the station completely and moved everything to the map itself. Simply put, you can now click on a destination from the map, select the type of expedition you want, and it’ll show a single page menu asking you to select which settlers to send and to set the various options. Of course, the tech requirements still apply, you still need the Exploration tech to launch expeditions. The expedition log can be accessed by clicking on the destination. An option has been added to show a popup when your expedition comes back (listing loot and people found) as well. 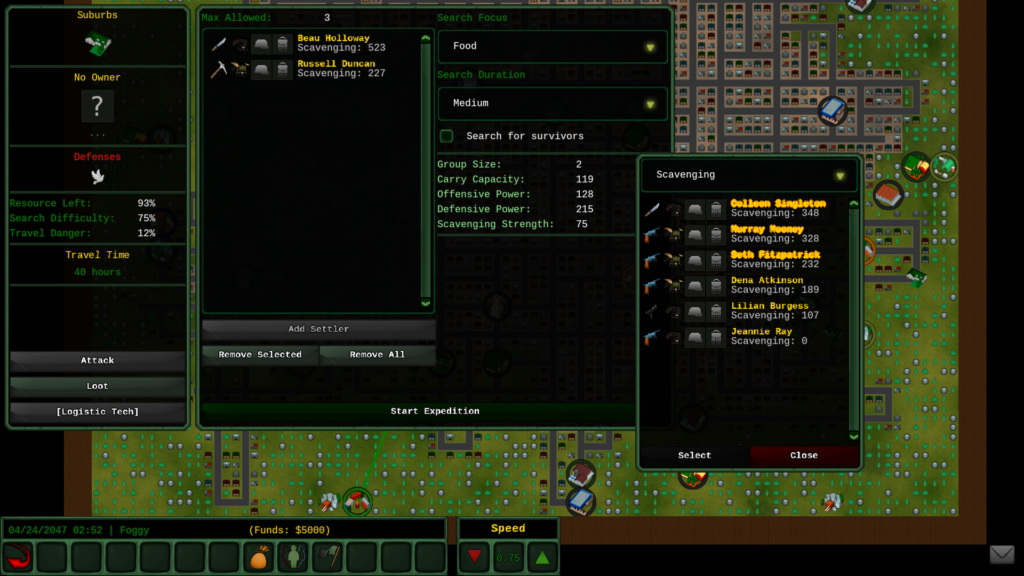 Additionally, the map menu itself has been standardized and uses the same “look” as the rest of the user interface. It has a bottom menu bar and the buttons to change game speed and pause the game. You can now access the population, diplomacy and stock menus directly from the world map too. I also fixed the instabilities/crashes introduced when I made the map compatible with real time game-play.

Until now, new animals would be straight up copies of either their father or their mother. It was all very boring. Now, both parents will be taken into account both at the “trait” and the “stats” level. If both parents have a trait in common, their child will have it too. It will also pick a random trait from either of them. If there’s not too many traits, it’ll pick one at random as well. It also picks stats from their parents at random with a slight randomization on top.

This is mostly interesting for dogs, which can be selectively bred to be strong and resilient, making them way more durable in combat situations. But to make that a tad more interesting for cattle, I also added a “Fat” trait to them. Animals with this trait will drop one more raw meat when butchered.

0.7.1 includes a selection of new things to build. The most important being the new Grow Lamps. Until now, you could “light up” underground farms with any light, even a camp fire. This was making underground farms clearly superior by any metrics to surface level ones. Now, you’ll need to place grow lamps near your underground farms for them to be able to grow surface plants. There’s 2 of such lamps. The first one is unlocked at the Metallurgy tech, and is fueled with coal. The second one is unlocked by the Electronics tech and will connect to your electrical grid.* 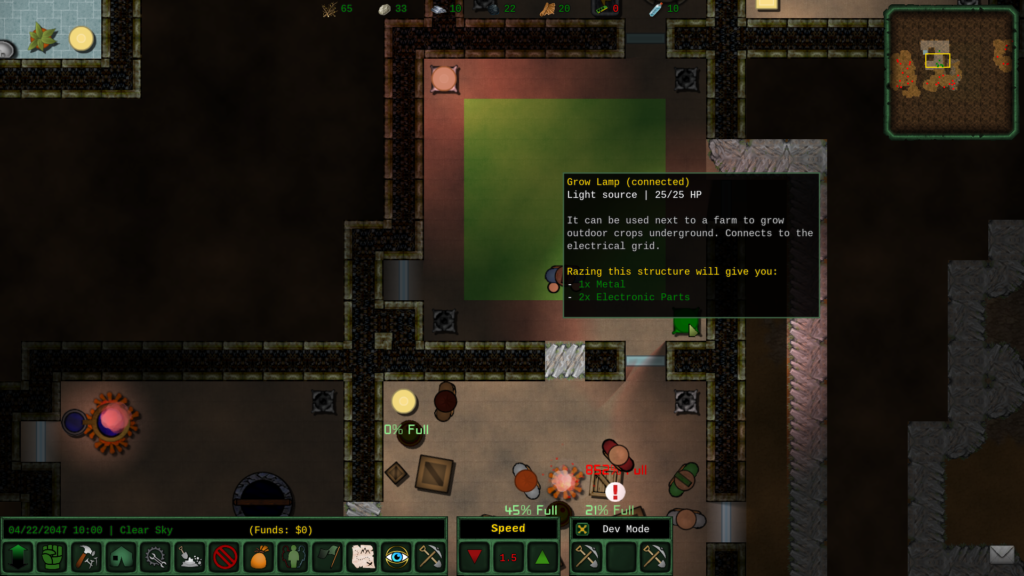 Depots’ capacity (starting at stone) has been increased. A medium metal one has been added to fill the gap between the underground and the large depots. Note that you no longer need to fully rebuild a depot when a better one is available, there’s a button to upgrade them in their menu. Speaking of upgrades, some factories can be upgraded too without having to rebuild them from the ground up (kitchen -> electric kitchen, forge -> electric furnace, wooden water well -> water well).

On top of the new world map UI, many menus have been slightly improved, especially the menu to select individual settlers (used in expedition, pet & room attribution). Additionally, when you have the bio or job menu open for a specific settler, clicking on another settler will directly open this menu for them. It makes it easier to compare two or more people. Oh, another user request: settlers can be banished from your settlement now (in their bio, there’s a new banish button).

Alex and I have been adding a lot of new functionalities for modders to play with. Consumable can heal people now. Factories can optionally feed themselves directly from adjacent depots. Traits can be filtered so they can only apply to specific species. We also have a lot more LUA bindings for those who dabble in those arcane modding arts. Check the change-log for a full list.

This version is mostly compatible with previous 0.7.0 saves. However, depending on where you are on the tech tree, your ability to build some of the items will be restricted until you’ve researched the new technologies added in this version (medical stuff in particular, but also tinkering stations and coal-based generators). Also, due to the way we store save-data, existing depots and factories placed before this update won’t have the new “upgrade to x” button.

Also note that if you have underground farms (growing surface plants), you will need to replace your light sources by the proper grow lamps or your crops will die.

So, this wasn’t exactly the update I was planning on releasing, but many of those improvements have been long overdue. The tech tree changes, depending on your earlier play-style, will most likely get a few more of your settlers killed in the first few raids. Settlers’ death is intended and an integral part of the game. This is partly why it’s so easy to replenish ranks through expeditions and random events.

Next update will focus on some of the major features planned for 0.7. Namely a way to add a “roof” above your settlers’ heads and the ability to tame new neutral critters.