As promised, and by popular demand, here is the absolutely fascinating ROOF UPDATE, which I will now proceed to explain in great details. There’s also a few new features like proper tombs for your settlers. As usual you can find the full change-log at the end of this very article.

So, we’ve added roofs. They can be built anywhere on the surface (1 wood per tile) to protect your settlers from the weather. You can of course also remove the roofs, but the wood is lost. You’ll find both options in the zone/room menu. The underground, by definition doesn’t need roofs. Because, you know, it’s underground. 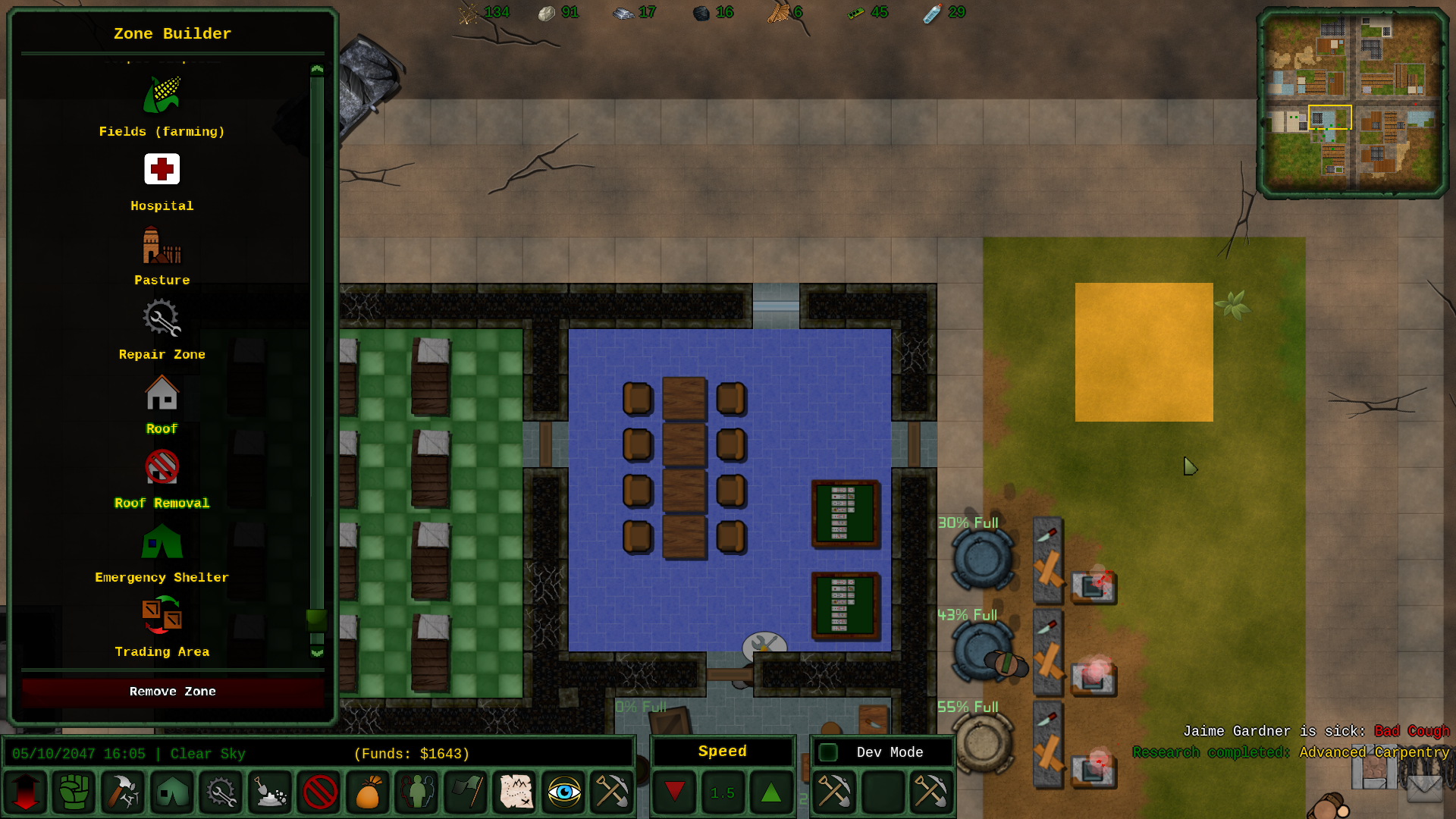 In practice, what does it change?

Well, things like solar panels and water collectors won’t work under a roof. Farms can, but most plants will require a grow lamp nearby. Things and settlers under a roof are not affected by weather effect. For instance, the dreaded acid rain will not kill your crops and make your settlers sick while they are under a roof. Additionally, most rooms (barracks, dining rooms, bedrooms, break room, hospitals) need to be under a roof for them to function properly.

If you start a new game with 0.7.2, buildings on the map come with a roof. If you’re continuing a game from 0.7.1, you’ll have to build your own, and rather quickly because all your rooms are likely to be missing a roof. Sorry about that.

I wouldn’t normally go over what is mostly a graphical feature, but given how better it looks now, I couldn’t resist.

The main issue when adding roofs was for the rain not to appear in roofed areas. As you might remember, our “rain effect” was an extremely crude animated texture put over the screen. It was ugly and make it not show over specific parts of the screen pretty much impossible. 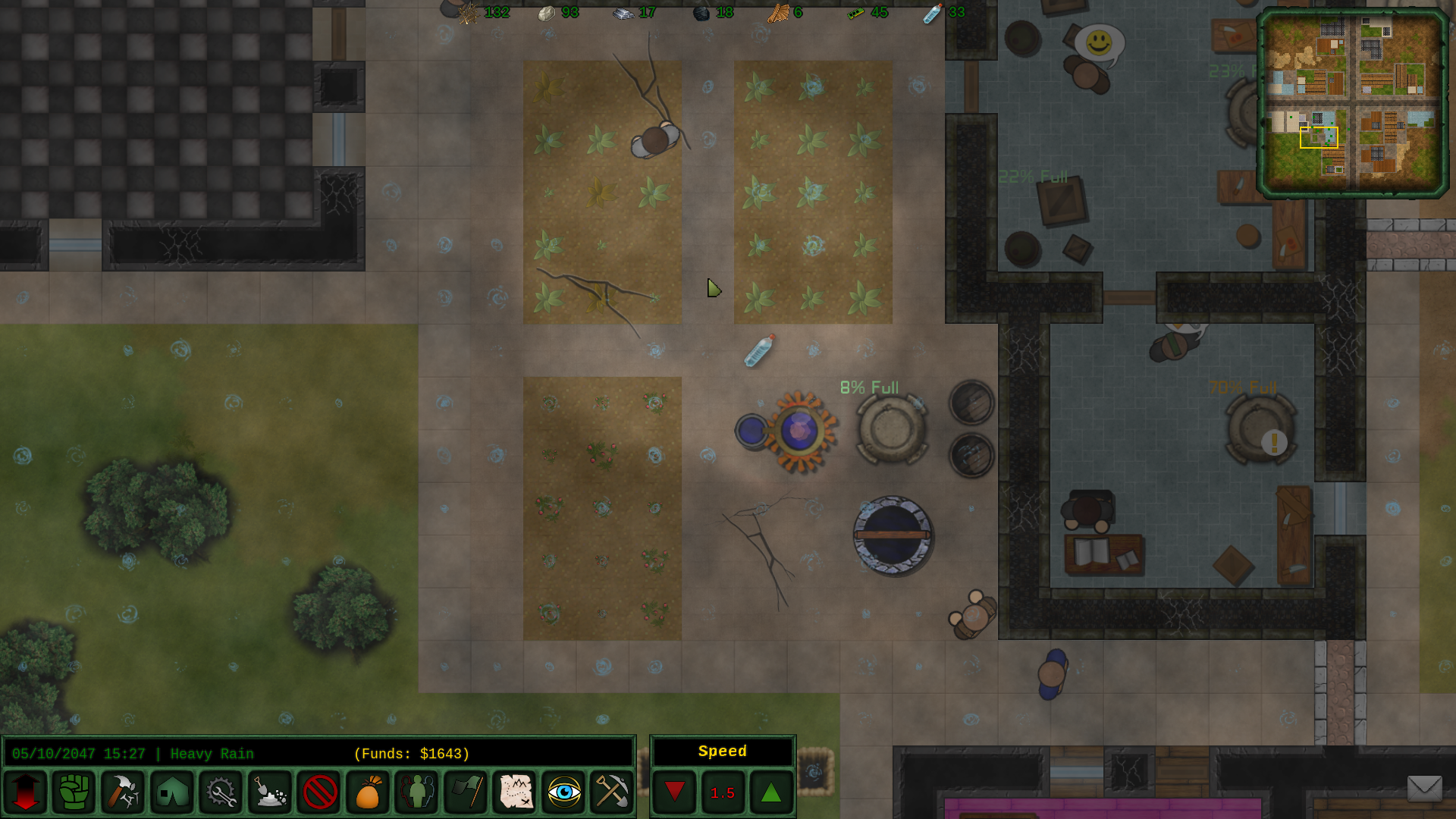 So, I rewrote the system entirely. Rain is now dynamic, with water droplets falling on the ground (in the open only). Note that the screenshots do not do it justice, it looks much better when in game. Interestingly, now there’s a visible difference between a light rain and a heavy storm.

You can now build proper graves for your settlers (and enemies if you wish). It gives the ability for your (still breathing) settlers to occasionally visit the tombs of their dead friends for a temporary morale boost. 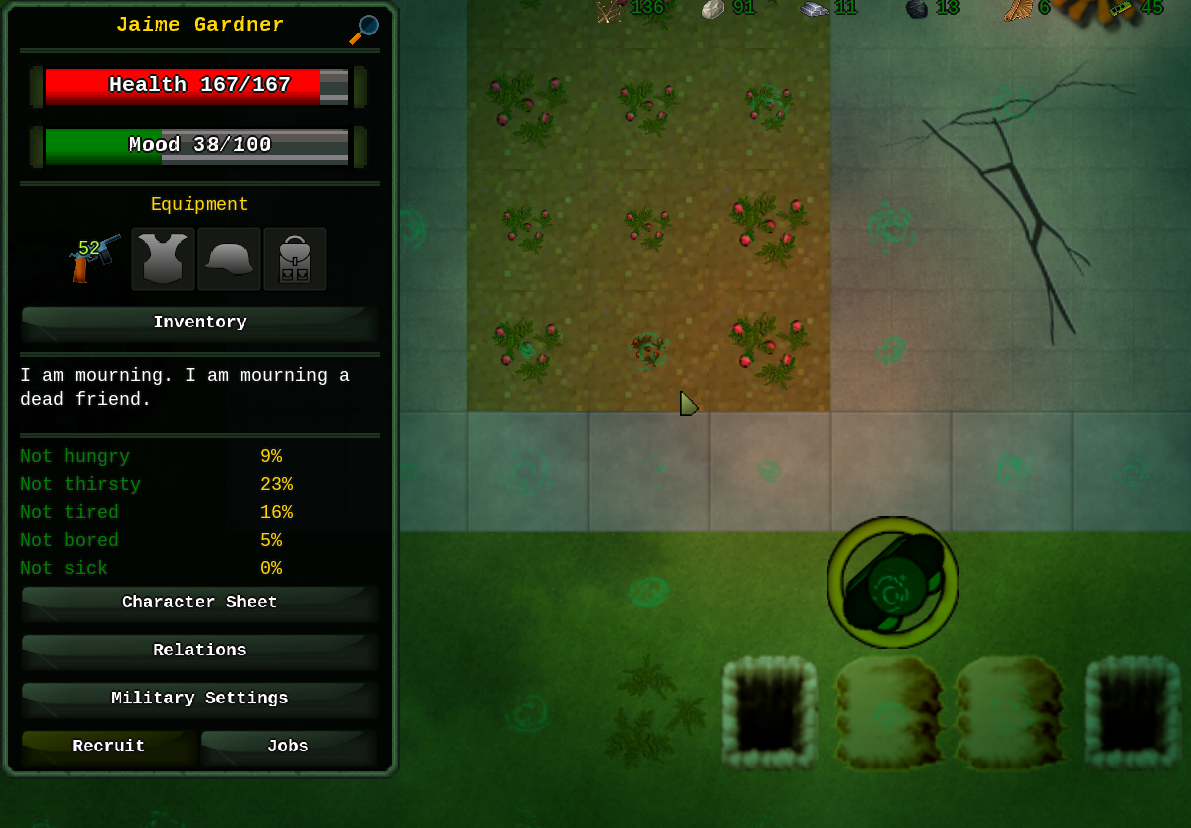 Settlers will only visit the tomb of someone they had a strong opinion about (be it a friend or a foe). It’s not cutting down on their productivity as they’ll only visit a tomb when they’d normally take a break.

As with pretty much any other in-game feature, tombs are fully moddable, and while the game currently offers just one individual tomb giving a mild happiness boost, it’s perfectly possible to add “better” tombs giving better boosts or mass graves having an opposite effect.

Speaking of modding, Alex has been hard at work adding an in-game mod editor. Currently, it cannot edit every single file type yet, but it will be gradually improved upon in the coming months. It also allows you to test your changes in a live game without having to restart the game each time you edit something.

I’ve also added several new features. Notably, traits can give constant damage or healing now (well by constant I mean every 5 seconds). Animals kids can have a different size than their parents, and weather effects can be tagged as “dangerous” to tell the engine that the settlers should favor pathing through roofed areas whenever possible.

I’ve also included a bunch of requested features, like keyboard shortcuts to center on the selected item, and to center on the last event in the log. More importantly, and note that this is still a tad experimental, most menus (factories, doors, research and so on…) can now be opened even when you’re in combat mode. You no longer have to switch in and out just to lock your gate.

Alex has also been adding a bunch of new Steam Achievements. More will come gradually.

And of course there are a bunch of smaller improvements, UI/balance tweaks and fixes based on your feedback. Refer to the change-log for a complete list.

This version should be fully compatible with 0.7 and 0.7.1 save-games. The only issue is that if you continue from a previous save-game, you will have to build a lot of roofs before your settlers start complaining.

With the roofs finally out of the way, we’ll be resuming our schedule. Next on the menu will be wild animal taming and the ability to interact with your cattle in “non lethal” ways, like milking cow, shearing the wool from a sheep, and so on.

We’ll also start implementing a new “Colony” menu where you’ll be able to set general rules and laws for your settlement. This is also likely where I will be adding a few useful features like the ability to automatically set jobs/skills based on your parameters in the future.

Then, in a few updates, we’ll be adding non lethal combat and the ability to take prisoners.