So, this is the last large content update for the 0.7 branch (minor bug fixing patches will still be released as need be). I will be moving toward 0.8 which will focus on procedural generation, the worldmap, and the game outside of the base building part proper.

In any case, this last update both redesign and add tons of content all over an expanded tech tree. I will go over the main changes in this article, but for a complete list, please refer to the changelog at the end of this article.

Modern weapon and armor repairs/building has been completely overhauled. To repair a weapon (or armor) you no longer need 2 damaged ones. Instead you need one + gun or armor parts. Armor parts, like gun parts, can be acquired through looting and trading. 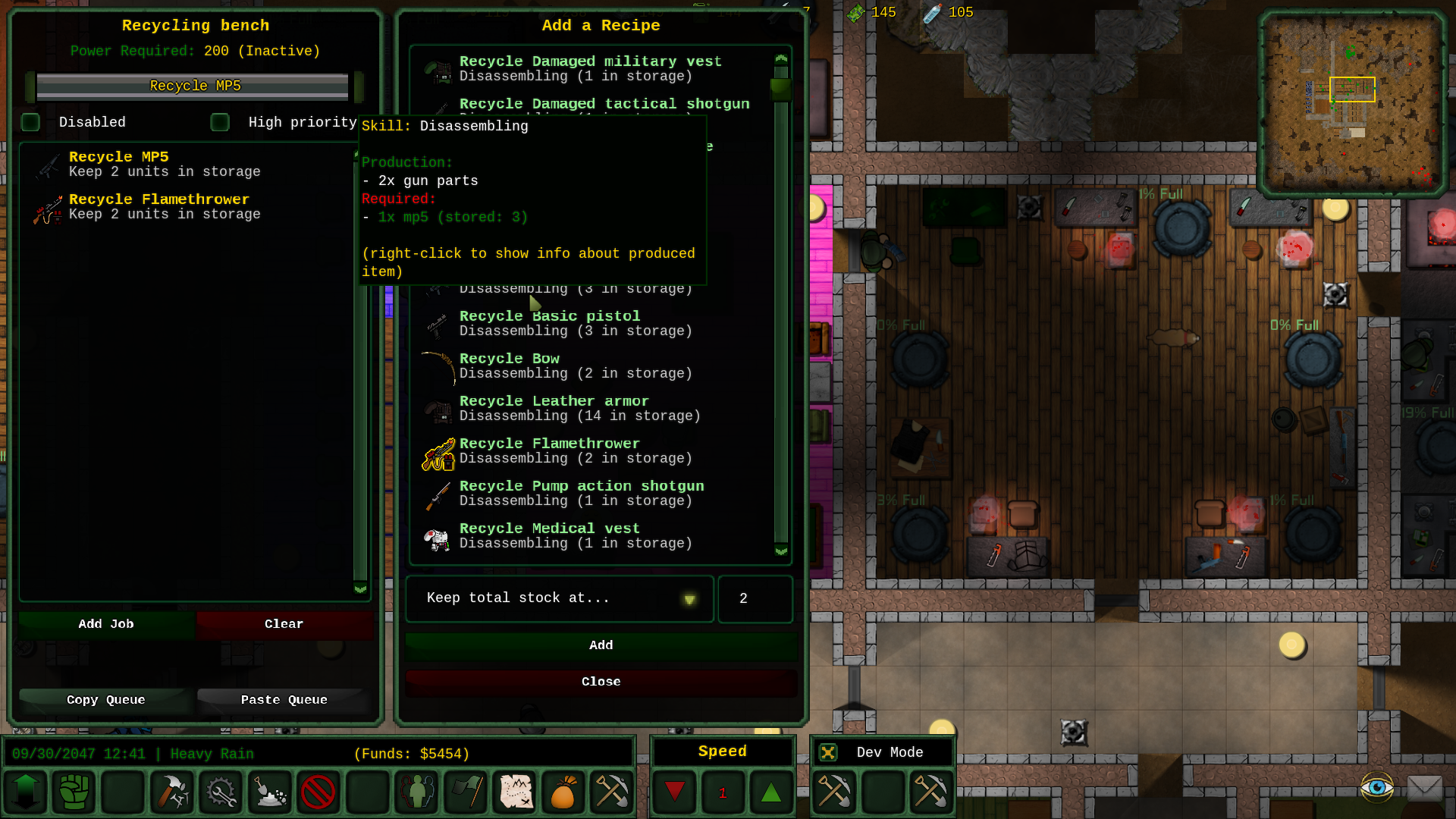 Additionally, a Recycling Bench has been added to the game. It can be used to recycle armors and weapons (damaged or not) into components, which in turn can be used to repair damaged weaponry.

As such, t is slightly easier to produce/repair modern equipement as a damaged G36 can be repaired from parts scavenged from other guns. Depending on how things go, i might tweak rarity and break rate accordingly.

Both the associated tech tree and the turrets themselves have been completely overhauled.

Basic turrets can be researched a bit earlier than before (power + pipe weapons). Those turrets will use artisanal ammo and will need to be fueled by gasoline manually. With electronics and another rank in turrets you’ll unlock more modern versions. Those can be connected to your electrical grid, require proper ammo (rifle ammo for rifle turret…), but are more resilient and do a lot more damage. By raiding a military base, you’ll find research documents to build another military tier level of turrets which use electricty as ammo. 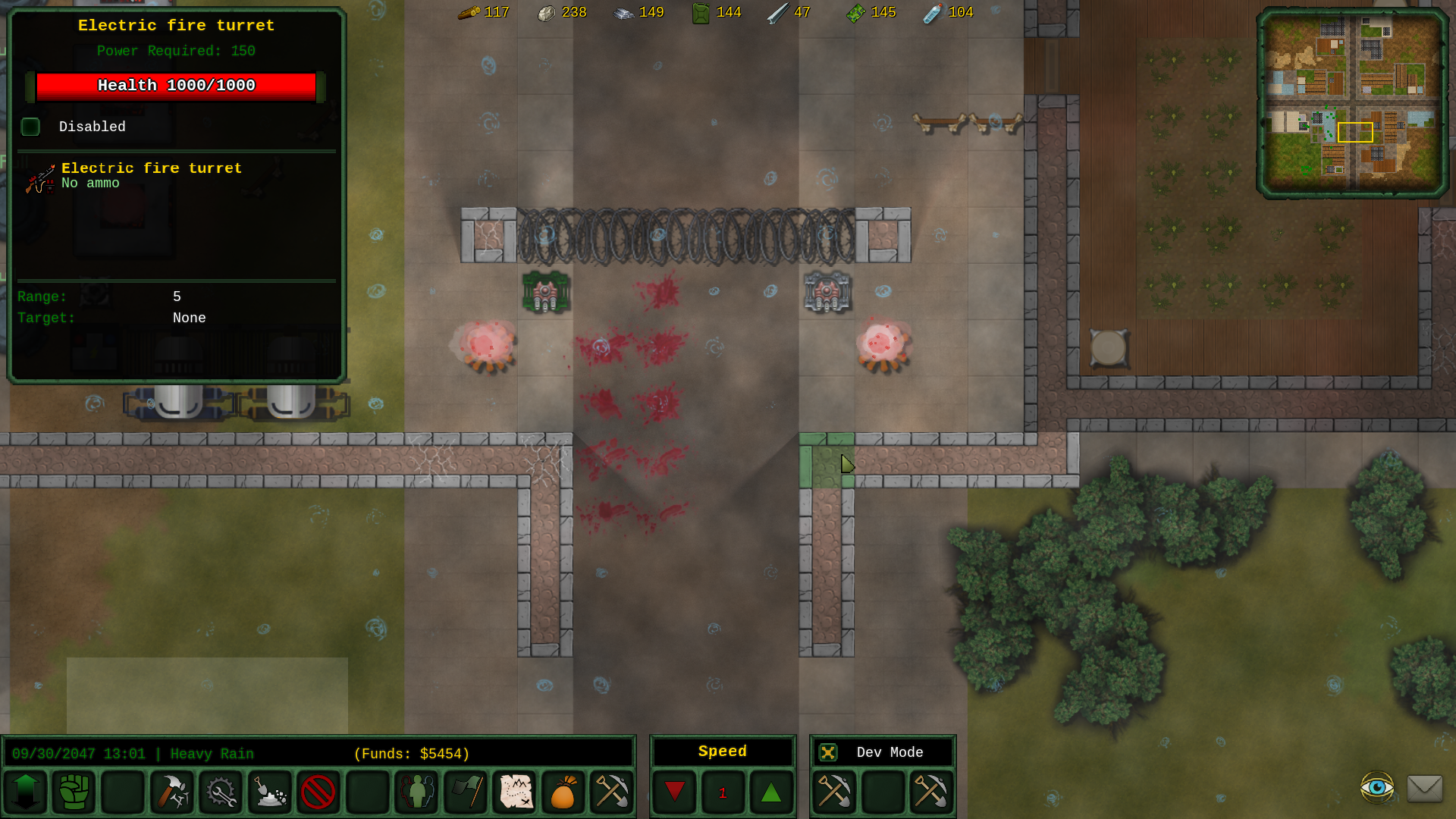 Additionally, turrets are built from generic “turret parts” (built at tinkering station) instead of having to build specific instances of each. And they have their own menu detailing the turret’s HP, ammo and weaponry now.

This is still a tad experimental, but all in all it’s working well enough to be added. 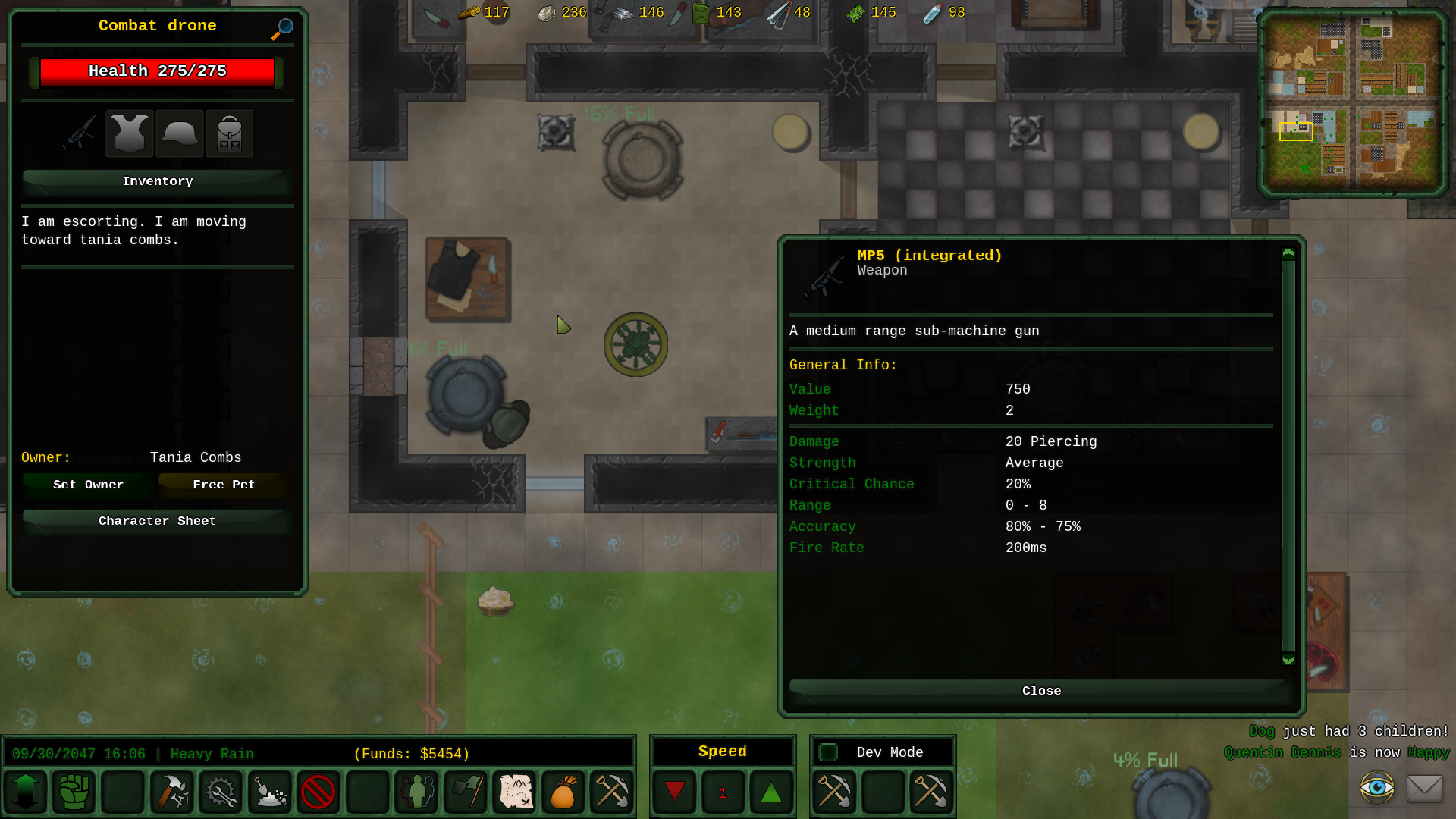 With advanced electronics, and later, robotics, you can build drones at your tinkering station from gun and turret parts. Drones behave like adoptable creatures. They can be assigned to one of your soldiers, will follow them around, actively hunt hostiles in range, and can be directly controled in combat mode. Menu-wise, they are handled exactly like pets (and might be still be referenced as animals left and right, I will be fixing that soon).

Many price inconsistencies between items and their components have been fixed. A very low tier bed (wood + plant) has been added, recipes and features have been tweaked to make both the early and the end game more meaty. High caliber rifle ammo has been added as well, it is used by sniper rifles, and 30cal machine guns. As a result, ammo related techs have been slightly tweaked to accomodate for the new ammo type. I also made expeditions travel 2 times faster, because the default speed was definitely too slow.

Simply put, traits can be contagious now. For instance, the bad cough trait can be transmitted through conversations between your settlers and can evolve either in a benign common cold or a slightly more annoying flu.

Shamblers and tribals are infected by the newly introduced Pandemonium virus, succesful attacks from them might transmit the disease to your settlers, which in turn can transmit it during brawls. It is difficult to detect, even manually, and getting a cure (and toxin) will force you to explore nearby hospitals. Of course, this is just an introduction, more ‘multi stage’ ilnesses an afflictions will be progressively added. 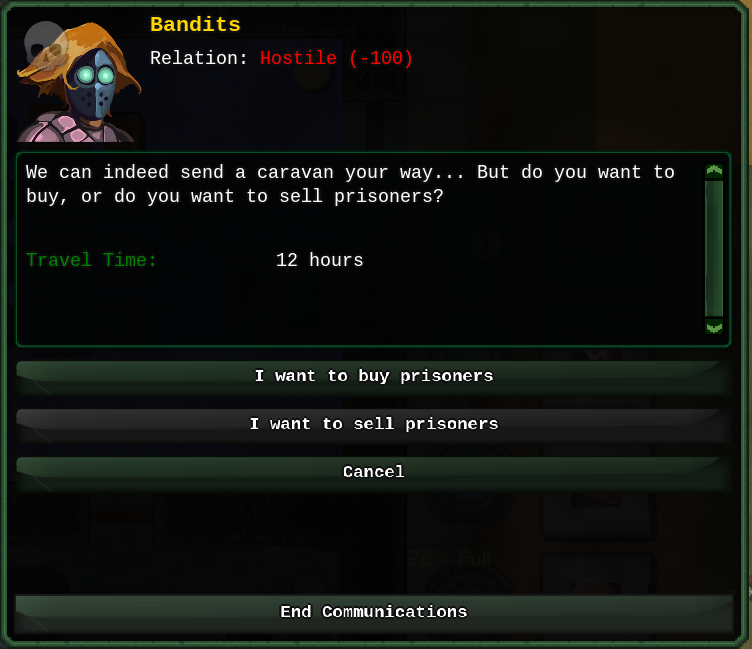 You can now contact the raiders by radio and request prisoner traders. Additionally, if for a reason or another, you “happen” to detain prisoners from another major faction, it’s possible to ransom them through the diplomatic screen.

I put a lot of effort into standardizing the menus (title formating, item placement…), and making most of them more clear and informative. Same goes with item descriptions, tooltips, help-screens and the tutorial. 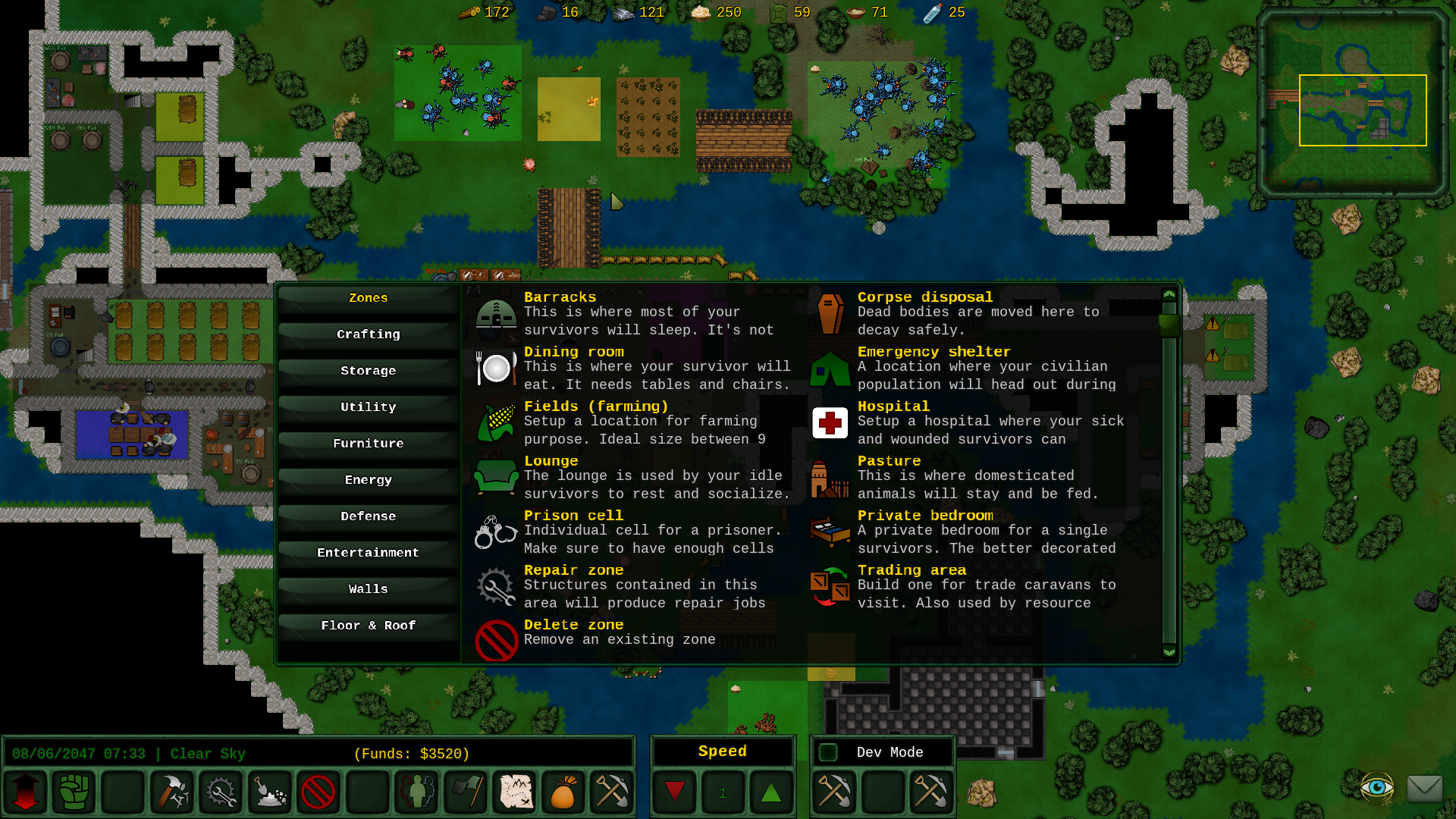 The first thing you’ll notice is that the build and zone menus have been merged. Having two separate menus for zones and buildings didn’t make much sense to begin with, and the recently improved build menu had more than enough room to accomodate the new category. As such the main game menu has been reorganized a bit, nothing major. 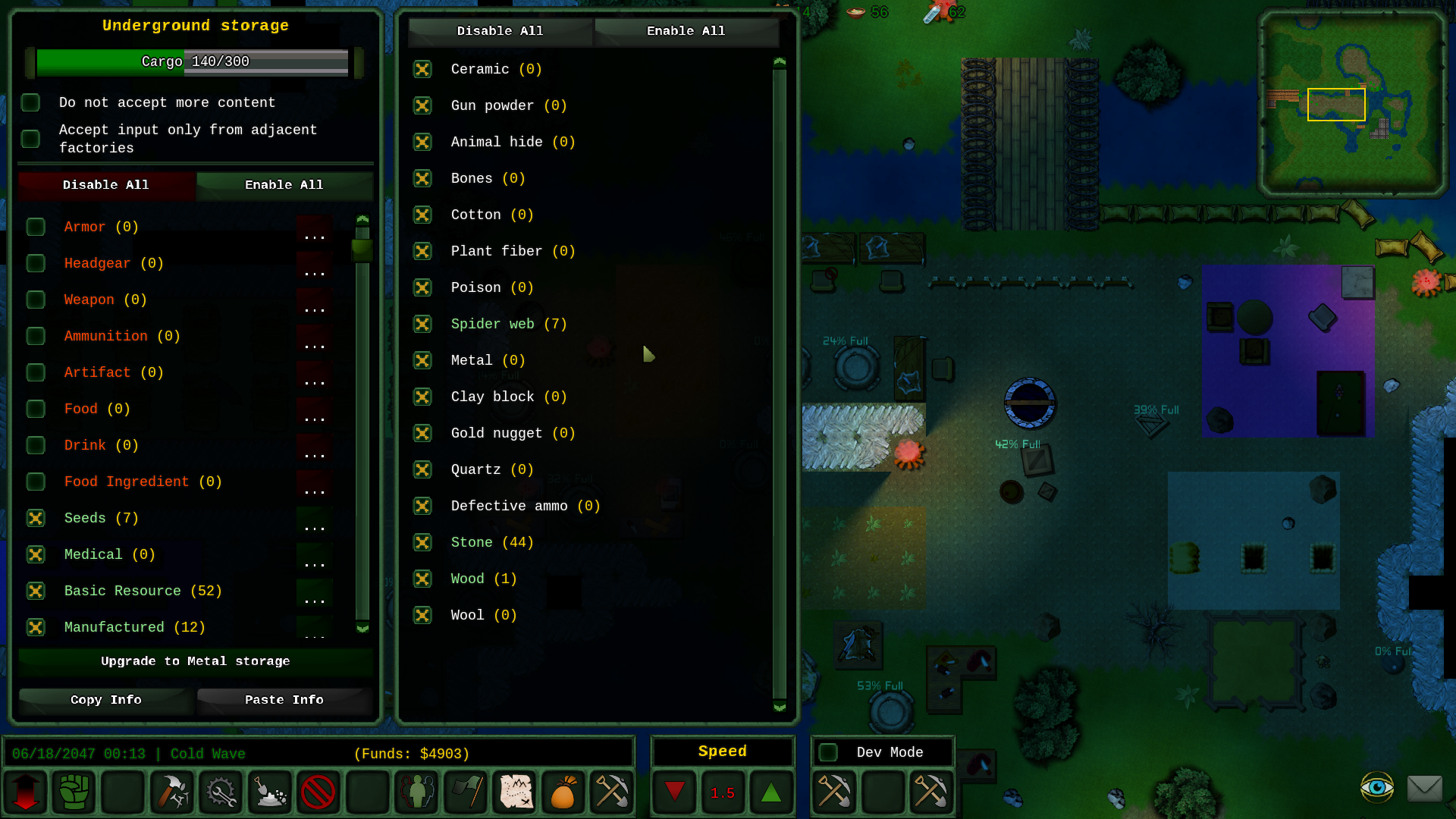 The depot menu has been clarified, detailed filter buttons are always visible, categories are color coded, and numbers have been added to represent the amount of items in each category. To access a depot’s inventory, simply click on the cargo space gauge at the top. 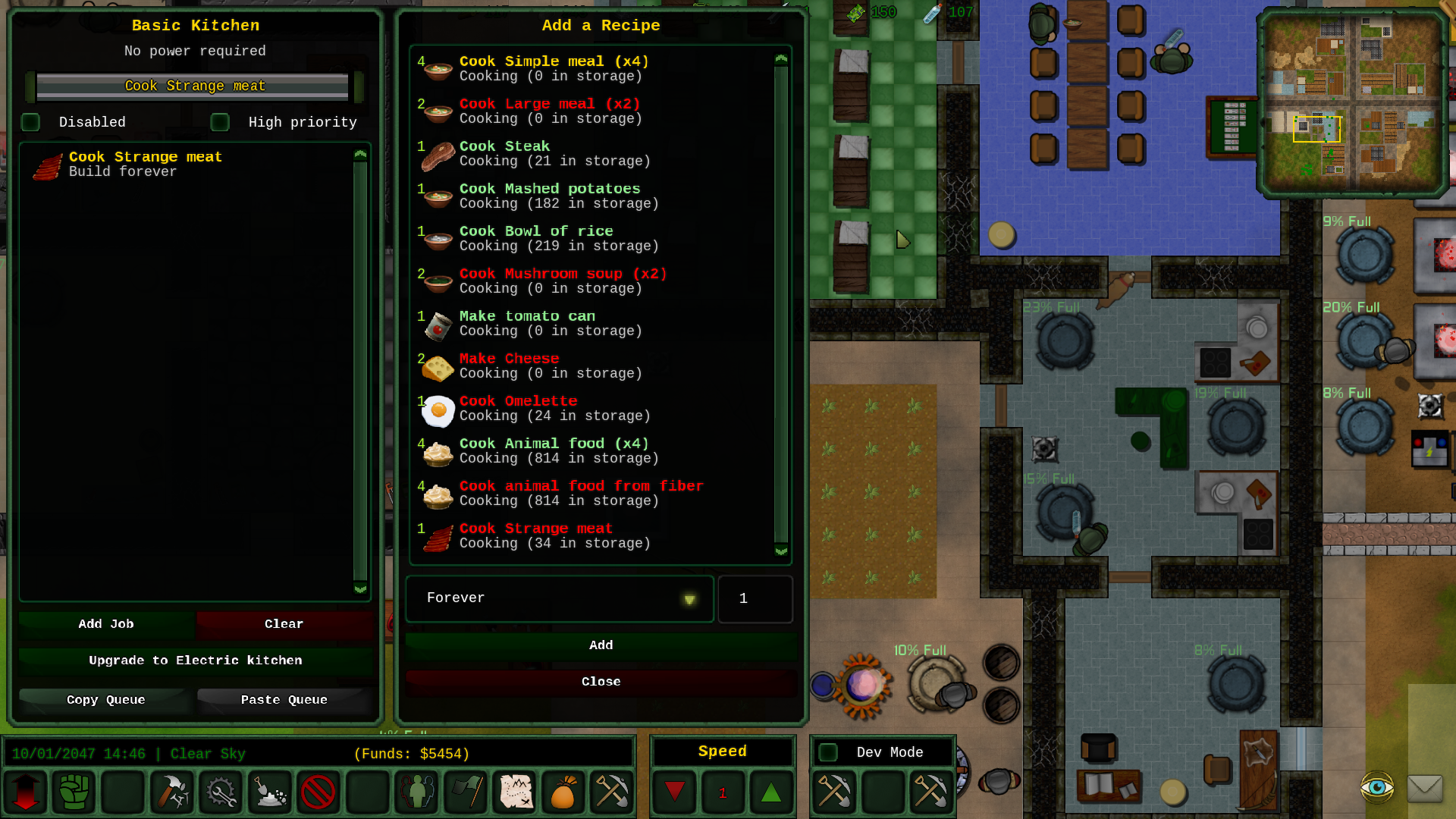 The crafting menu has been cleaned up as well. Single recipe crafting stations (tanner, water purifiers, well..) got a simplified single screen version of it. The recipe selection sub menu is a tad different than before but functionality wise it’s virtually identical. 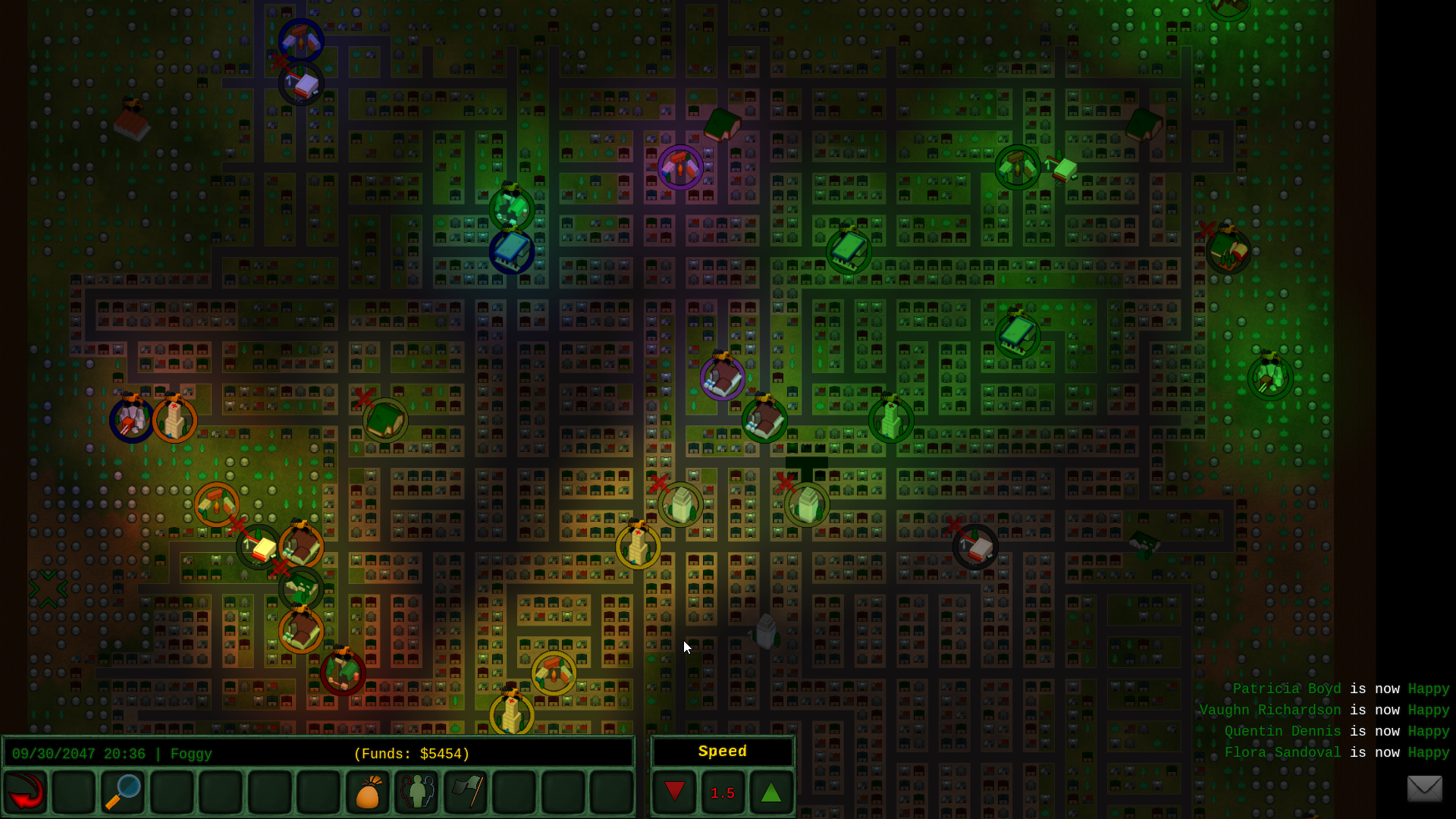 The world map was slightly improved as well. Points of interest have icons showing if there are enemies and if it’s a production center. It’s also possible to switch between different filters (normal, map ownership, hostility, loot left).

The list is way too long to go over, but the goal was to make a more consistent UI while updating all tooltips and menu items to “current days”.

Addictions are partly implemented, refer to data/addictions (and alcohol items) for examples. Traits can now morph entities (and morphed entities can be attributed a new faction). Please refer to the sickness_pandemonium_tribal trait for example. Traits can be transmitted through conversation (only for now, I’ll be adding more options soon), see sickness_cough for an example. RaceData files contain more details: PetRange (distance vs owner), PetProtectOwner (true/false), PetMourning (true/false), Aggressive (true/false), DirectControl (set if player get direct control of it during combat).

Finally, mods adding/altering languages, sounds and themes can now be added to the game. LUA integration got a facelift with a bunch of fixes and improvements.

This version should be compatible with saves dating back from 0.7.2 and over. Of course, the more recent the savegame the better, but generally speaking, it should work without too many problems.

One big exception, if you have turrets placed already: they *might* behave incorrectly until they get replaced by the new ones.

So, this was the last large 0.7x update. I still have some non-critical / rare bugs and issues to fix, which I’ll go over through small patches, but all things considered I think the game is in a good place to transition to the next branch of development.

Next week, I will publish an article detailing the major features and improvements I’ll be working on. Generally speaking, we’ll be focusing on map generation, world map interactions and start up scenarios.