This is a new major content update for After The Collapse. I added three entirely new interlocked features, while improving the graphics, user interface, AI, balance, gameplay and fixing (most) bugs that have been reported to us. Also it seems that I have forgotten about posting last update on this very website, I’m very sorry about that. You can refer to this post on steam for a summary.

It’s going to be a long ride, so let’s get started. I’m only going over the more notable changes. There are plenty of other improvements you can find in the full, 100 item long, change-log at the bottom of this very article.

Combat, at least between humans, became less of a binary affair in this update. Attacks that would normally kill someone, or get very close to, have a small chance to incapacitate the target instead. Note that getting incapacitated will not prevent them from dying of their wounds if any. 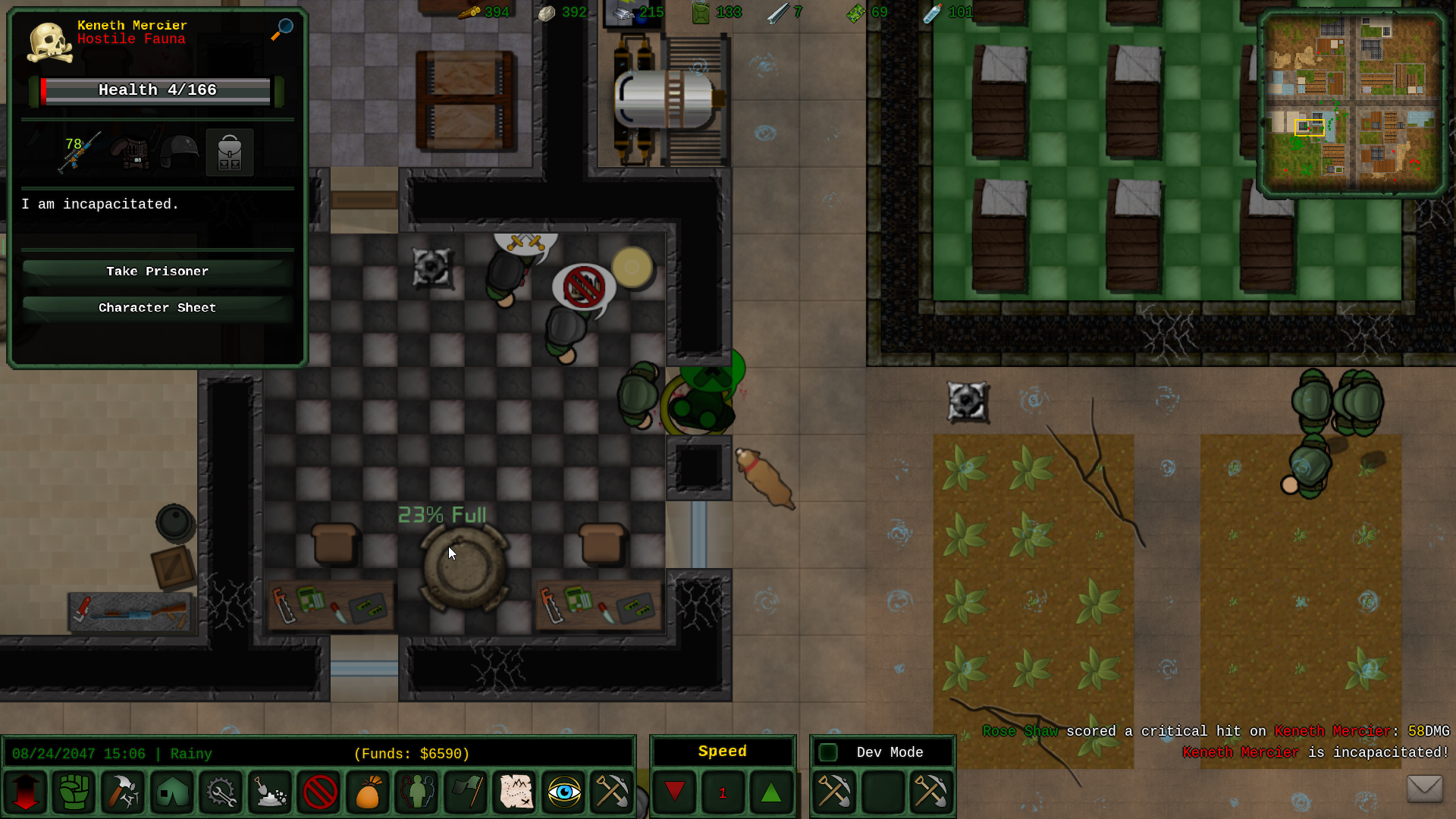 If one of your survivors gets incapacitated, a doctor will try to retrieve them and bring them to your hospital for treatement. If it’s an enemy, you’ll have an option to take them prisoner (more about that later). If no one comes to take care of an incapacitated person, they will come back to their senses after a few minutes.

Additionally, some weapons have a higher chance to incapacitate a target. Low tier melee weapons like the bat, the shovel and the spears all have increased chances to succeed. I’ve also added two new weapons entirely dedicated to this task: the stun gun and a gas grenade launcher. Both have an extremely high chance to successfully stun their targets without damaging them too much, but are pretty useless in any other situation.

Note that only humans can be incapacitated at the moment. Monsters and shamblers are immune to it.

This is the core new feature in this update. You can now take prisoners, make them work for you, recruit them, or do terrible things to them.

It is done with the introduction of a new Room, aptly named “prison cell”, which needs a bed and 4 walls. Assuming you have a prison cell ready, enemies you have incapacitated have a “take prisoner” button in their (new) info panel. When clicked, they will be converted into a prisoner and one of your survivors will bring them to their cell. 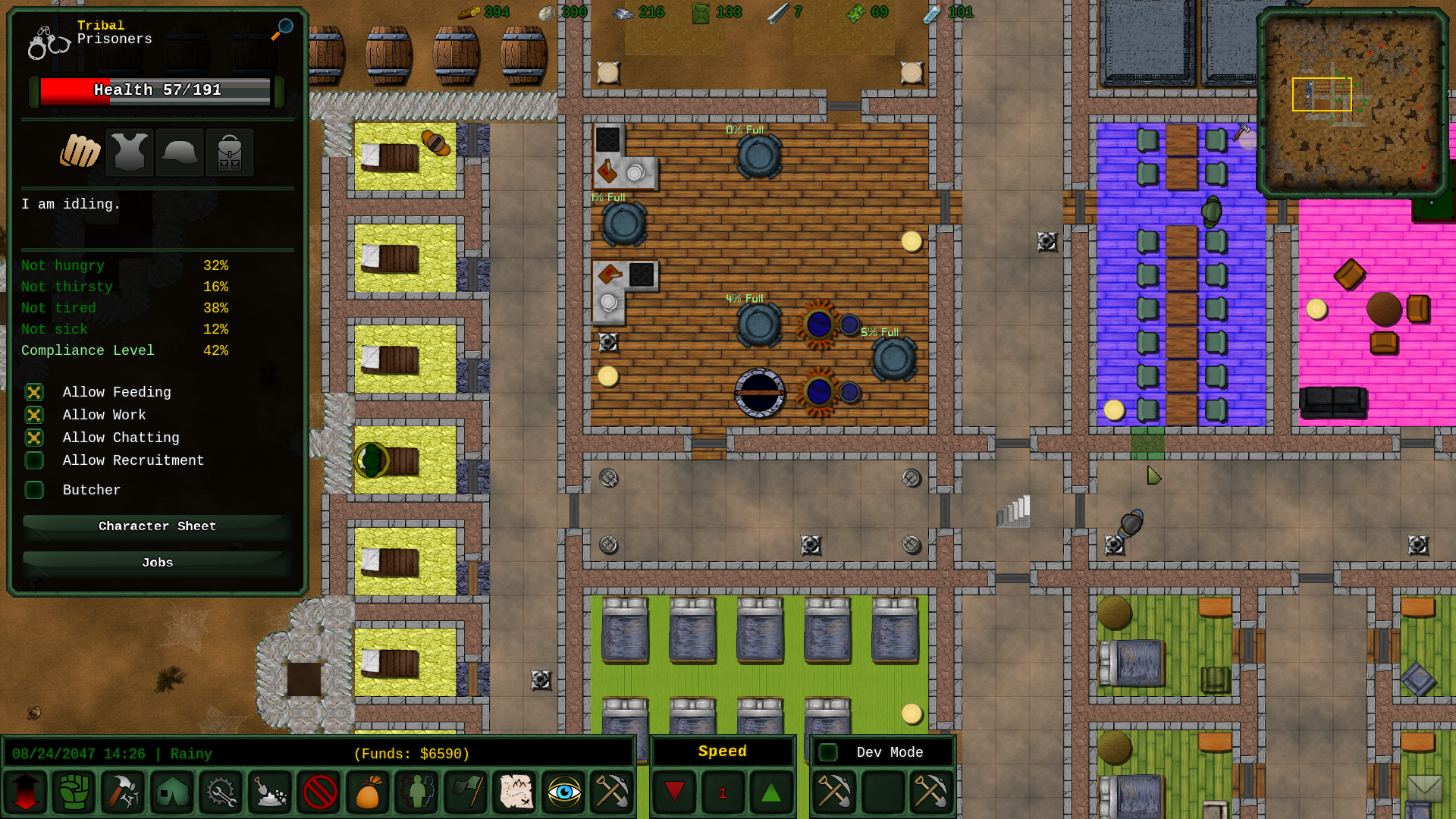 Unless specified otherwise, prisoners will stay in their cell, and your survivors will occasionally feed them. So why would you want to take prisoners? Well, because they can also be put to work, don’t eat nearly as much as your survivors and do not take breaks all the time.

However, you’ll need to remember that prisoners are not willing workers. They have a “compliance” meter to replace their “entertainment” needs. A high compliance means that the prisoner won’t try to escape and can even be recruited. If the compliance goes down to zero, they will riot.

Generally speaking, being well treated (given food and a proper cell) will slowly increase this value. You can also allow your survivors to chat with the prisoner, which will generally increase it much faster, but can also backfire. Prisoners chatting together have a fairly high chance to decrease their compliance, though.

And if you’re not happy with your prisoners’ behavior, well there’s still another option…

So, do you want to run your settlement as a band of cannibalistic raiders, or acid rains killed all your crops and are you desperate for food? Well, I have good news for you! If you allow it in the new “Settlement” section of the faction menu, you can now butcher both human dead bodies and your prisoners for meat.

As soon as the option is enabled, bodies in your disposal zone and prisoners will have a “butcher” option like your cattle does. This action is considered an atrocity by anyone in your settlement who’s not already a cannibal or who isn’t starving to death, and will bring their morale down quickly. 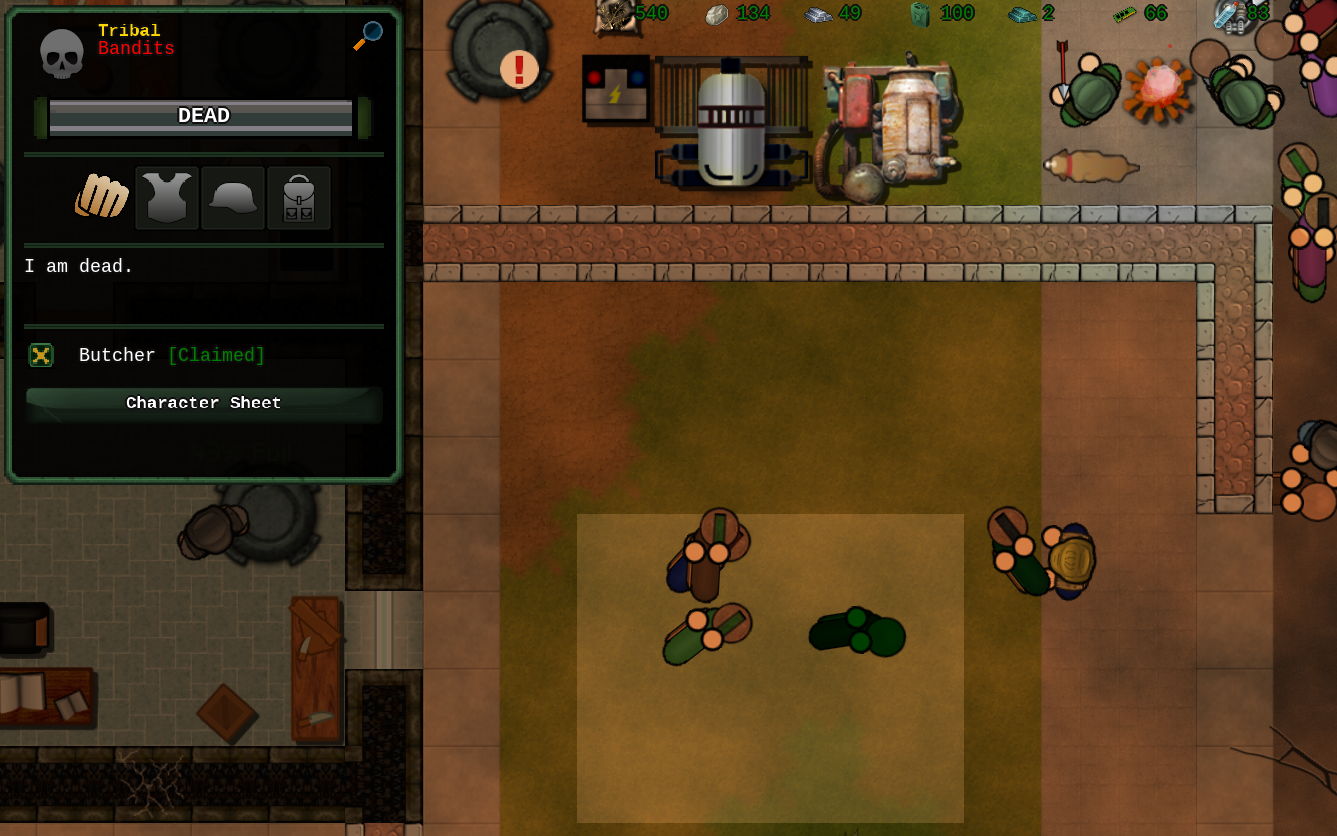 On the other hand, eating human meat has a small chance to convert a survivor into a cannibal and a recipe has been added to the medical station / pharmacy combo, to make a drug that will definitely turn someone into one. So with a bit of patience and planning it’s possible to convert at least most of your settlement to their new diet.

Well, this new Faction tab is still under-developped, but it’s what is linking all those features together. This is where you’ll decide of your policies regarding incapacitated enemies (keep or kill), the ability to butcher people, and even if your survivor are allowed to consume booze or not. While the ‘human butchering’ option wasn’t technically a necessity, I think it’s best to keep the option behind a checkbox for those who’d be disgusted by it. 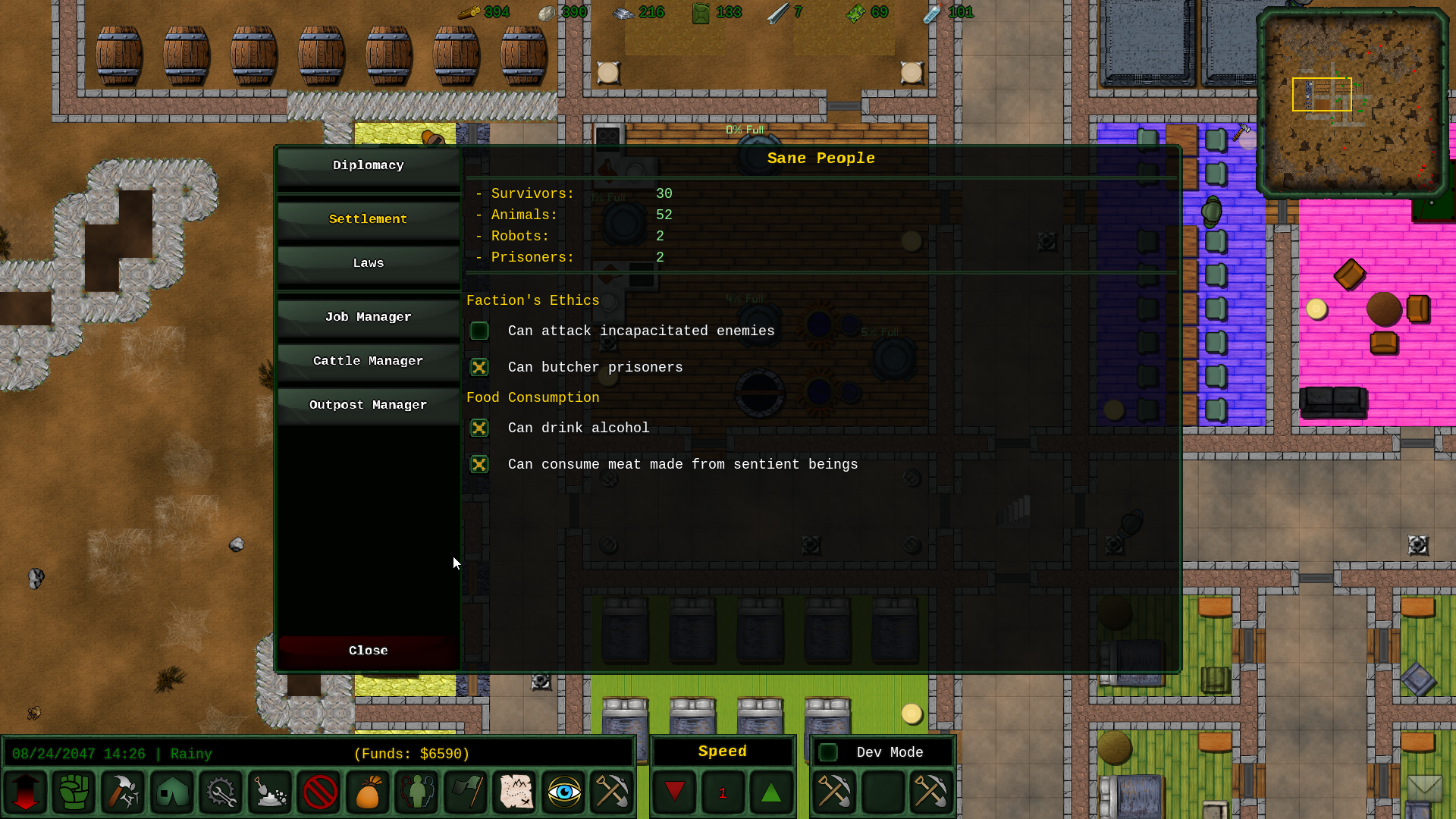 In the long run, i intend to add more options to this menu regarding what your settlers can and cannot do, which might influence their mood and behaviors in different ways. Eventually leading some of them into breaking rules and being punished for it. But that will be a story for another update 🙂

Two simple features have been added to keep your cattle/pet population in check. Firstly, a checkbox has been added to pastures to prevent any new birth as long as the pasture is full. Secondly, adopted pets can be neutered as well through their info panel. 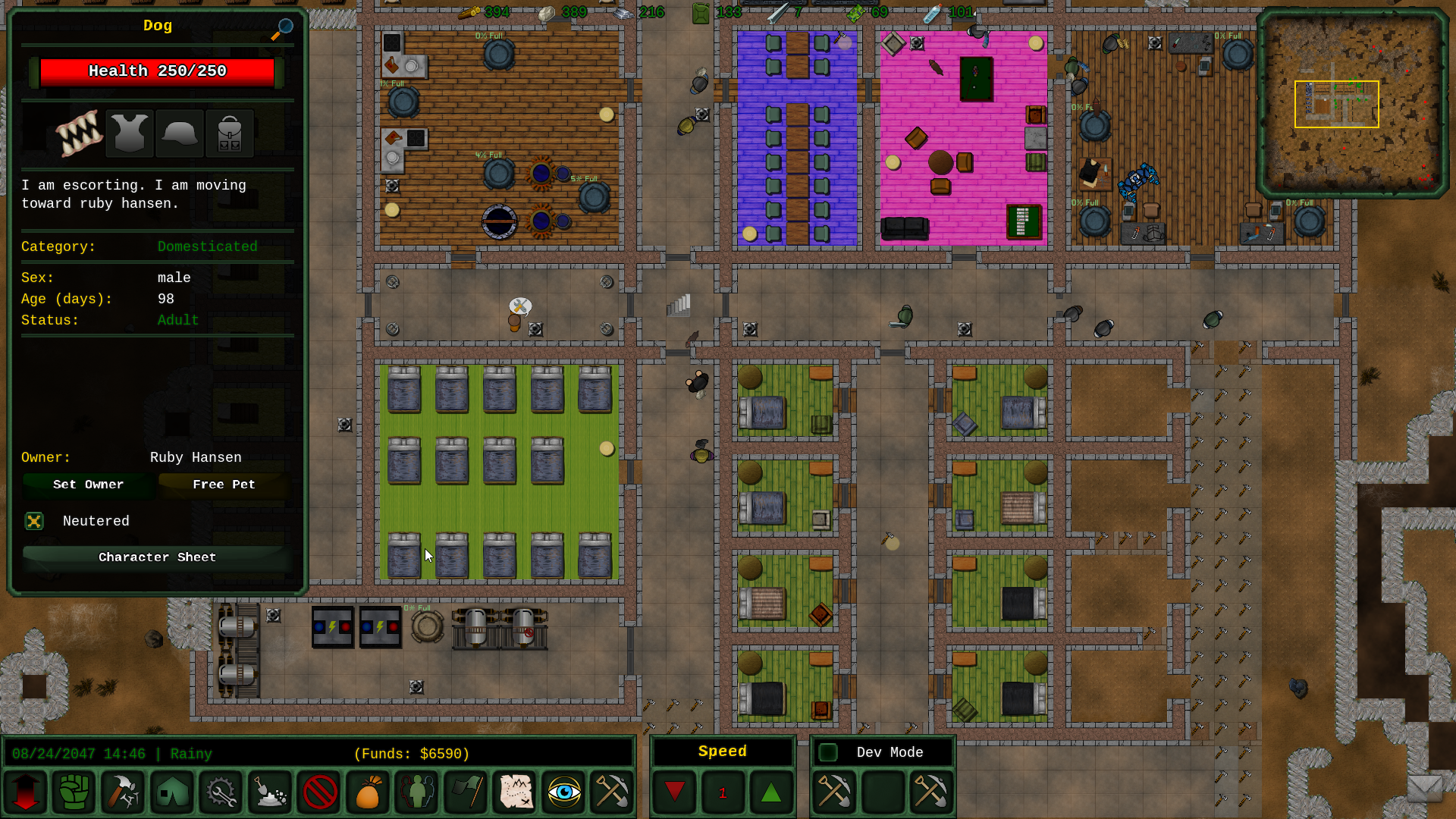 Both options put together with various other fixes and improvements should make things much more manageable when it comes to handle large animal populations.

The first thing you’ll notice is that the Build menu is larger, has more categories and that items are sorted alphabetically, making it much easier to navigate, especially with mods. Note that some items have moved categories. Namely, stairs are in the utility section now, and everything power production and storage related is in the new “Energy” category. The only downside, beside ruining your muscle memory (sorry about that), is that the menu looks quite empty in the very early game. 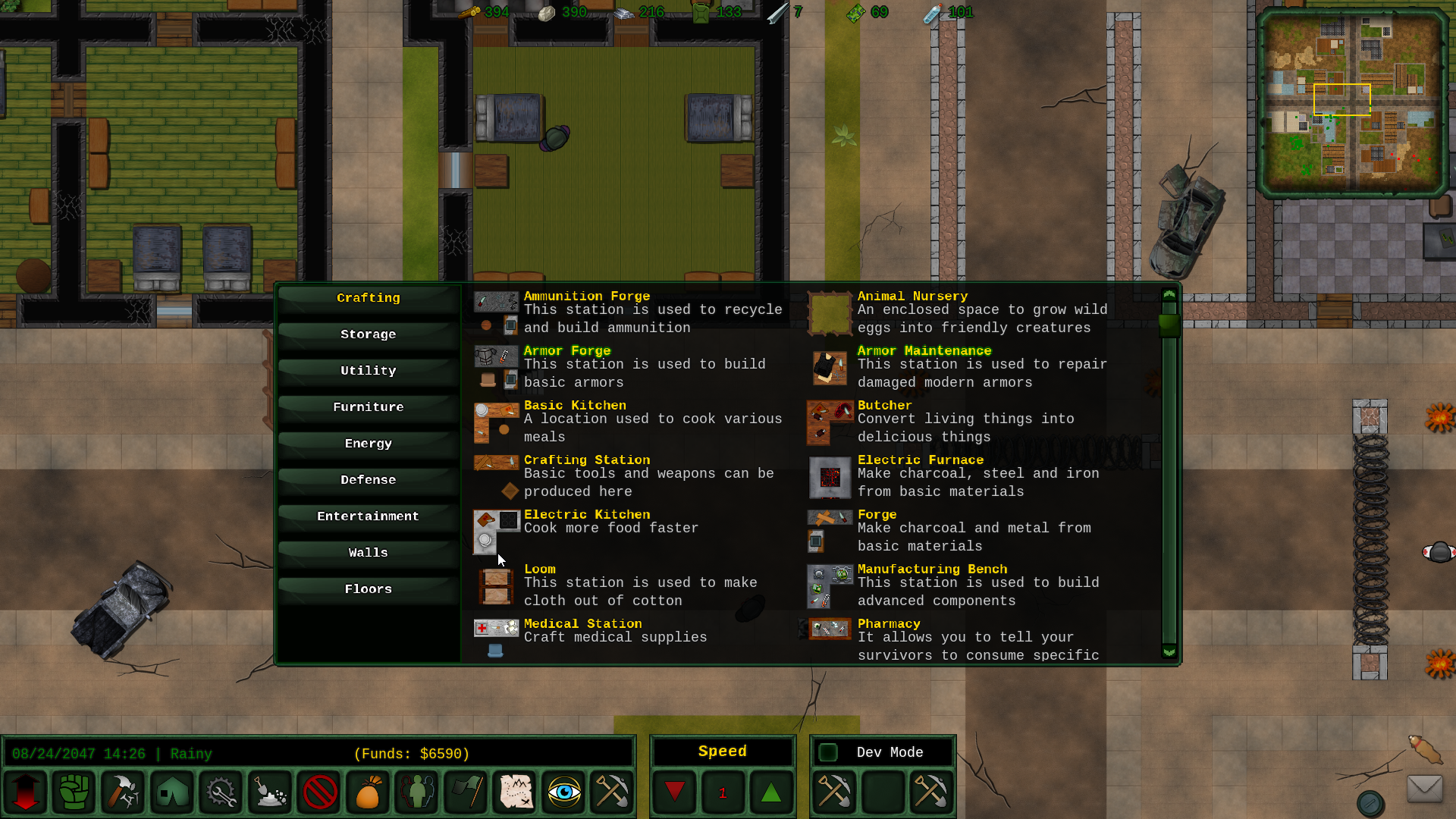 The top panel used previously for neutral and hostile agents has been replaced by a top left menu similar to the survivor info panel for consistency sake. It also delivers more information than the previous panel.

Graphically, the giant mantis has been replaced by a different, but way better looking and fully animated critter. About 20 items got new icons; wood, especially, got a way more legible one. Techs, mainly in the main ‘tree’ got new, better icons as well.

Raiders are also much less CPU hungry and while this is more a bug fix than a feature, they will no longer come close to freezing the game when encountering a player base that is completely walled-off (with no door).

The mod editor is now able to add items of any kind (thanks to Alex), several issues with mods altering vanilla crafting stations’ recipe lists have been fixed. Data wise, several fields have been added to weapons, to handle incapacitation and new tile graphical effects for AoE weapons. You can refer to the new “stungun” and “chemicallauncher” weapons for examples. Additionally, factories and farms can technically create agents now (you’d proceed the same way you’d do elsewhere, with an ItemAgent).

CattleAI is not deprecated, occurences should be replaced by PetAI. Determining if animals are adoptable or not is done through their racedata file (“Adoptable” field true/false) now.

This version should be compatible with saves dating back from 0.7.2 and over. Of course, the more recent the savegame the better, but generally speaking, it should work without too many problems.

Here are the caveats:

As you can see, it’s quite a large update, but I’m not yet done with the prisoner stuff. Next update will add more interactivity with prisoners, with the ability to buy, sell and ransom them. I also intend to improve the pretty bare-bone “riot” they do when compliance reaches zero, making it a tad more threatening and less predictable. Also I’ll be adding a few tips

I am aware of three, very minor but quite hard to pin-point, bugs which have already been reported on discord and the forums and which I couldn’t fix for this release. If you’re interested, the reported remaining issues are:

I’m still working on fixing them, but I can’t justify delaying this release further when it contains dozens of more critical fixes and improvements. No worries, I don’t doubt we’ll have a few hot-patches to get them fixed.

In any case, I hope you’ll enjoy this update!