Well, it has been quite a busy week. After The Collapse, alongside it’s first (obligatory week 1) patch got released on Steam. It fixed a lot of issues with job priorities and the balance in general while adding some nifty things like repair zones. You can take a look at the changelog here. Another patch should follow this week, fixing the remaining issues that have been reported to us while adding some requested features. After that, we’ll start working on 0.5 (while delivering smaller patches when we can afford to do so). END_OF_DOCUMENT_TOKEN_TO_BE_REPLACED

Well, it seems like I can post one last devlog before the release date! We should release After The Collapse between the 4th and 9th of October depending on some external factors. The devlog is going to be a bit shorter than usual, but I really wanted to showcase the last 2 missing features: Expeditions and Trading. I mean, a truckload of other things have been implemented, improved and fixed. But going over the last month of coding would spoil some of the fun. And quite frankly, too much has been done for me to list every single little detail.

But, before that, a few announcements are in order! Firstly, I just opened the ATC Wiki. it’s extremely bare-bone presently, but this is where the complete documentation will end up, the same way I did for Unending Galaxy. Secondly, we have a discord channel now! You can join by clicking this link (and waiting a bit, so you won’t have any other choice than reading the rules). I can’t promise i’ll be on 24/24 obviously, but it’s a good way to catch me in a less formal context.

That’s about it for now. Let’s get to the devlog 🙂

END_OF_DOCUMENT_TOKEN_TO_BE_REPLACED

Before we get into it, I have a few announcements to make:

Firstly, a month ago I promised another update for Unending Galaxy. Sadly, this is not going to happen until After The Collapse is officially released and the first few emergency patches have been delivered. I’m already on a 12h a day / 7 days a week schedule. I just can’t find the time to get around it. As much as I don’t like to leave people hanging, I’ve to admit I’ve bitten a bit more than I can chew on that one. So my deepest apologies to everyone involved. UG will get patched, but only in a couple months.

Secondly, If you look at the After The Collapse menu on top of this page, you’ll see a Bug Tracker link. It’s a system used to keep track the development, bugs, and potential features. You can register there and post bug reports, ask for specific features, and so on. Not everything i’m doing currently is included there, as it wouldn’t make much sense before release, but this system will be the best place to post about bugs, issues, and keep track of the game’s development in real-time in the future.

With that out of the way, let’s dive into the devlog proper 🙂 END_OF_DOCUMENT_TOKEN_TO_BE_REPLACED

It’s time for our 10th After The Collapse devlog. But before we go over that, I’d like to thank Ranalcu for his donation. As stated a while back, donations aren’t necessary, but hey, it’s appreciated! 🙂 Anyway, there is a lot to go over. Agriculture is the big item in the room. But a lot of work has also been done in other areas with a menu showing details about the settlers’ mood, a major upgrade to the trait system (which is kind of misnomer, as it’s used for injuries and sickness too). Map decay, for that post apocalypse feel. On screen filters, etc.

END_OF_DOCUMENT_TOKEN_TO_BE_REPLACED

Here’s our monthly After the Collapse devlog! A lot of things happened since the last one, and even the video posted last week is, quite frankly, outdated on all fronts by now. Simply put, the development is picking up pace nicely. Let’s get over the most visible changes.

It’s not final yet, but I’ve opted for transparent dark/green menus. Menus that all have been standardized so they behave the same.

Above is pictured our good old settler info screen. Percentage values have been added for the needs. Weapon and armor information have been added too, a left click on those will allow you to change the selected survivor equipment while a right click will display related stats. Sub menus haven’t changed much, and we still need to add a mood related menu, but it should be done fairly quickly.

The only part I’m not a fan of are the bottom buttons. They serve their purpose, but it’s below what i’m aiming for. Not really an urgent matter, but still.

As explained in the last devlog, I implemented support for a tech tree and research in general. The related ‘science station’, settler skill, menu and an actual tech tree have been added. It’s not very long yet, but those are things we’ll go over during Early Access.

Right now, we have 11 technologies, unlocking more and more advanced buildings, recipes, and options. There’s not much to add on the matter for, it just works ™. However, if you have a good eye, you might have noticed those weird circles in the first screenshot. Well, that’s the….

It’s pretty much self explanatory. I added support for power management, production and requirements. But, contrary to RimWorld, you won’t have to draw lines all over the map to do so. 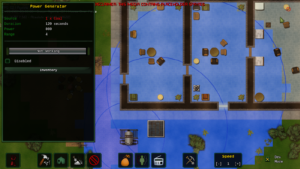 Instead, we’re using a system similar to Starcraft’s Protoss pylons. Simply put, you build power relays at regular intervals to extend your coverage. It’s effectively the same, but requires less micromanagement and visual pollution than drawing power lines. After the Collapse supports both fuel based generators and solar based ones. More advanced options being gated by research.

The only ‘missing’ option is the ability to store power into batteries. Technically, it shouldn’t be a problem to implement, but it will probably be for later.

A couple devlogs ago, I explained my dislike of the storage zones we find in most, if not all, base builders. I’ve been experimenting for a while now, and I’m glad to announce that we’ll be using dedicated buildings for storage. As such, everything will be weight-based (maintaining both size and weight was pretty annoying code-wise, so that’s another plus for me). You’ll start with the ability to build very small storage zones (basically a box) and early research will allow for more, larger options, with a building cost.

It’s working very well, and I’m just missing some on-screen indicator to show how full the individual storage areas are. I’ll probably add some icon or overlay for that. Initially, I thought about having specific storage buildings for specific item types, but it ended up not being very practical (and it would require 10 times more sprites). Instead you’ll just be allowed to setup your filters yourself. I might use that option for food when spoilage and such have been added, but that will be for much later down the line anyway.

And, of course, a lot of bug fixes and small improvements left and right. Notably, I added (draggable) info panels for items, weapons and armors as displayed below.

Survivors no longer try to all sleep in the same bed, or eat on the same chair, instead they will always pick a different one or wait for one to be freed. But it’s kind of crutch system until we give them a proper sense of ownership. Proper sound effects for most weapon fire and reload actions have been added. Some progress has been made in the map generation department, with the ability to generate different biomes and mountain ranges, but it’s still in it’s early infancy. Last but not least, I am currently writing the first elements for farming, so you can expect a devlog about that next month.

Well, that was quite a productive month. I had to put the RTS combat commands on the back-burner, but we’ll get to it. The last two major points needed for the base building side are farming (in progress) and medical. I’m not aiming for anything too fancy at the moment, the goal is to have a full system first, then and only then we’ll make another pass at each system.

END_OF_DOCUMENT_TOKEN_TO_BE_REPLACED

This After the Collapse devlog might sound a bit unfocused compared to the previous ones. It’s the result of me starting to glue together all the parts (detailed in the previous devlogs) together. While it is still very bare-bone, it’s definitely heading in the right direction. And by that, I mean it starts looking and playing like an actual game.