Weapon and ammunition maintenance and handling has been fully implemented. You can see below the first few weapon models we’ll be using. And, yes, you’ve read correctly, ammo is a thing in After the Collapse. Thankfully, your survivors are pretty self sufficient, and will pickup the correct type of ammo (if available) by themselves.

To keep with our “salvage” over “mining” theme, you do not build your own firearms (well, at least not until very far in the tech tree) in this game. You’ll have to find and repair damaged ones left behind by your enemies or during scavenging runs. Ammunition, however, it can be both. You’ll find boxes of ammo in the world, and you’ll be able to craft your own using more basic components with the right technology. Additionally, our overall system is fairly complete, and leave the door open for weapon mods and customization later down the line. 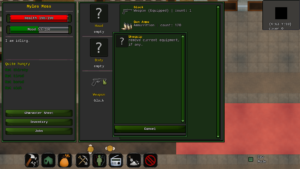 Of course, I also taught the survivors how not to run straight at the enemy anymore. To achieve that, objects on the map (be it trees, rocks, walls) now provide some cover from weapon fire. As such, during combat, survivors will gradually move toward the point the with most cover, within ideal firing range and with line of sight toward the enemy. It’s not ideal yet, but at least it doesn’t look too silly and it means your people can hold their own against minor threats without having to micromanage every move.

This one is pretty much self explanatory. We now have a basic tech tree. Advanced items and recipes will be unlocked by different techs. It’s a standard combo you’ve already seen in multiple other games: tech tree and research station. There’s an interesting bit, however, some technologies can require the player to own a specific item (on top of any other prerequisite tech) before being unlocked. Items we’ll happily hide in danger ridden buildings. The user interface side is lagging a bit behind on this one, so you’ll have to wait a little while for screenshots.

I went back to the crafting/factory menu. Individual orders can be repeated instead of a global repeat for the whole queue. More importantly, it’s now possible to have a job stop when you reach a given amount in store. As such, it makes things like maintaining a decent quantity of food or ammunition in store much easier. The list itself and menu design is still a bit rough around the edges, but it’s improving. The “settler list” is also more graphic now, and showing more information from the get go. Filters, sorting and other quick options are still missing, but it’s going somewhere. We also added basic support for dynamic factions, which is opening the path toward diplomatic actions, visitors, caravans, raiders and so on.

Since After the Collapse’s official announcement, I very often get to read people citing (the most excellent) RimWorld as a comparison point. With comments ranging from “poor man’s rimworld” to “rimworld killer”. Those two statements are equally terrifying from a developer’s perspective. For once, their game has been in an immensely popular early access for 4 or 5 years. ATC hasn’t, and I know how easy it is to forget how rough and content starved were the first releases. Secondly, as much as RimWorld is obviously a source of a inspiration (alongside many other base builders), it’s not very high in my list. If anything games like STALKER and State of Decay have a much stronger influence on what i’m aiming for.

This puts me in a difficult position. On one hand, I don’t like over-promising or announcing features before they are being actively worked on. On the other hand, people genuinely want to know what will happen and why they should follow this project. So, let’s strike a deal: I will list those differences and mid/long term “non rimworld-ish” features and you’ll accept they aren’t set in stones. Some might get discarded, others changed beyond recognition, and the order in which they will be added might change.

Those are planned for the EA release or soon after. They are practically “sure things” but actual implementation details can change. Also, note that I’m only listing things that are clearly different from RimWorld. I am skipping things like commerce with other factions, bandit raids, and such.

Those are features that will be fleshed out between EA and 1.0. As such, I can’t go into much details, and the community will have its say in it when the time comes. Some of those features are in RimWorld, but I’m aiming at different end goals.

This is for post 1.0. As you may know if you’ve been following Unending Galaxy’s development cycle, 1.0 is just a number to me. It just mean that I think the game has enough features to hold its ground on its own. It definitely won’t prevent me from continuing the development “as usual”. In any case, we’re entering hypothetical territory here.

What NOT to expect

And obviously, there are things Rimworld do (or don’t) and which I don’t feel like they’d fit the bill. They might be too costly in development time or don’t work with our theme. Multiplayer is out, for the same reasons it’s out for every other game in this genre. On the base building part proper, I intend to keep things focused on what make sense in a post-apocalyptic world. So no HD TV or dozens of different crops for your farms. Those are things which can be added through modding anyway. The medical system probably won’t be as deep (no bionic limbs), but that one is still being evaluated. While relations between your settlers will definitely be a thing, it will be more a case of getting rid of the black sheep than building some kind of utopia where everyone is constantly overjoyed.

Well, that was a much longer article than expected. I thought it was necessary to clear the air about common misconceptions, and, I feel like linking to this post will come in handy in the future. Anyway, we’re getting close to the Early Access phase. Next step is to refine what I’ve implemented this month, add some kind of director to dispatch raids, add RTS type controls for firefights. Then, I’ll look into medicine to heal wounded soldiers.

5 thoughts on “After the Collapse [devlog#8] Weapons, techs, and expectations”