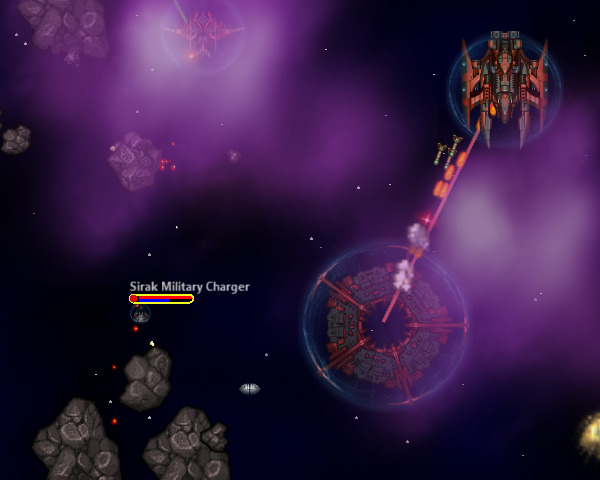 I am done with the trading system ! Well, as much as I can be with a game I plan on supporting for a while. The most practical addition is the new dock scanner featured in the screenshot. Alongside generic information about the targeted dock, it tells you what said dock will buy and sell and, of course, at which price. Like ships, you can scan any station as long as it’s visible (obviously) to you in a way or another. It should make trading easier and much less luck based than before.

Also, as requested, it is possible to prevent your automated trading ships (miners, free traders and scavengers mostly) from going through pirate sectors.

And last, but not least, colonies have been fully integrated into the economic system. I will have to update the documentation because it’s a bit complicated, but here’s the gist of it anyway:

First, to link a colony to the economy, a trading station must be present in the same sector. Each colony type has a list of wares it will import and export periodically (every minute). In instance, an agricultural colony will add 10 wheat and 10 cattle every minute to the station for free. One the other hand, it will import, at maximum price, 5 chemicals, 5 medicine and 10 energy cells at the same rate if they are available in the station’s hold.

This last addition seems to have completed the economic system, AI factions, after the initial colonization period make more money than they can spend. Further down the line, it’s likely that replacing trading ships and replenishing military bases / carriers will cost money, as well as maintaining order / morale in your empire, but that’s for a later update.

There’s plenty of those 🙂 I reviewed the jump mechanics, simply put, it takes 30 seconds for the drive the recharge instead of a minute. I also reduced the time it takes to do the jump itself from 8 seconds to 6. The first change is to cut the time spent looking at the scenery doing basically nothing, the second change is to increase the life expectancy of automated ships. Oh, I also finally added a charge percentage to the jump button.

To speed up colonization a bit, when a faction (you included) takes over the star and all planets in a solar system, all unclaimed sectors in that system will be given to the faction automatically. And, of course, nothing of the sort will happen if one of the planet is already colonized by another faction.

I added the ability to make non aggression pact (NAP) with the AI. A NAP ensures neither you, nor the AI can declare war on each other for a while, 30 minutes at default speed if i recall correctly. While at it, I also tweaked the calculations deciding if a faction is willing to give you money, declare war or make an alliance. The last issue that need to be resolved is that you’re still permitted to attack freely friendly territory. I am reluctant on forbidding such moves completely, so I’ll try to find another way.

I also added a new manager that will automatically pay up your bounties (from the diplomatic account, so you can keep control over how much money you want to allocate), auto-generated civilians aren’t concerned. And, as usual, there’s the various UI improvements, including better looking weapon and shield stats, larger menus, a map that doesn’t massively lag when you’re selecting a sector from it, and other various fixes. That being said, the paid version will come with a native mod manager allowing to enable, disable and re order mods without touching the original data files.

By comparison the free version will only support overwriting of the official data folder, while not limiting, it makes using mods a bit less practical.

I also spent some time updating the editors themselves. I updated the description of many of the settings and toggles. I added optional dodge chances vs weapon classes to ships (unused in the game, but can be added via modding), shield resistance versus damage types, and other goodies. I am also taking future developments into account, adding new features to existing editors should be less likely to cause savegame and mod incompatibilities between versions.

The toolkit could still use a major user interface overhaul, but it will be for later as it is a time-consuming task for little practical use. It’s also depending on how successful the game will be. For once, I exactly know what’s going to happen next, mostly because my to-do list is beginning to shrink 😉

The procedural map generator is the most likely next candidate. As usual, the first draft is likely to be functional but somewhat basic, it will be improved through patches.

Next, there’s a few new mission types I want to add, an optional and dynamic plot (of sorts, a bit like the side plots in X3) with a nice reward at the end, a few more faction specific large events.

After that we’ll have to tie up loose ends, improve faction warfare a bit, rebalance a few weapons… and add a tutorial (oh boy). I’ll be frank, I don’t like tutorials, I have no idea on how to write one properly. I’ll do my best, but giving a look at the wiki / manual is still going to be required to understand the most of what’s going on, especially at the empire level. And finally, the code optimization pass to improve performances 🙂

Anyway, that’s all for this week !