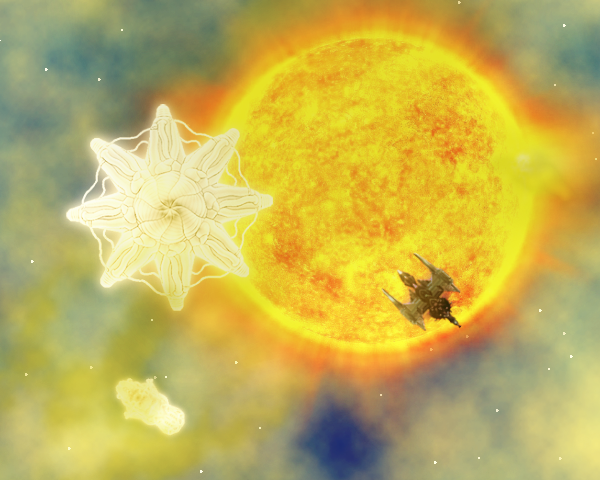 I added two new factions to the game, the Nilith Republic and Titan Corporation. This is a major faction, it has its own ships, weapons, docks, and trading goods. They are shield experts who live in oceanic worlds. They produce their own luxury goods, and have a custom ship part production chain.

Nilith ships and stations are very big, avoiding bullets can prove to be quite challenging for nilith pilots. They, however are fast, powerful and equipped with high capacity shield systems. Nilith weapons aren’t bad either, long range, decent damages.

It has a price, niliths don’t use jump-drives, they still build and use gates, though.

It’s a playable scenario in the deluxe edition too. A minor faction, they use and build their own ships, they also have a couple unique factories. they produce energy out of crystal, and there’s absolutely nothing suspicious about them, move along pilot ! 🙂 I removed the left menu bar and replaced it with a panel at the bottom of the screen. This panel also displays your health and target information. Most menus have been screen centered too.

Menus scale with the resolution a bit better and don’t overlap with the order panel anymore.

Pinning fleets and bookmark works like you’d expect too (auto close when menu is open, otherwise it stays visible).

I also reviewed how damage works. Until now, we had 3 damage types based on hull and shield damage multipliers. It was also hard-coded into the executable. I made it moddable instead. Also, damages are defined as shown in the screenshots below (damage type editor):

The ability to give specific damage multiplier to specific target type is new, I am using it for Flak damages. Damages can also be applied to the battery of the object being hit, hence the new EMP damage type.

Damages modifiers are applied in the following order, and let’s take a flak weapon as an example

I put all big ships (carriers, builders, capitals) in the same category for convenience’s sake.

I fixed the annoying display issue when some moving ships jitter. I also added new planets, nebulae and backgrounds. Fixed bugs left and right, this kind of thing.