Here is a new massive content update for our 0.7 branch! It’s introducing the ability to tame many of the wild creatures you can encounter in-game. It’s also adding many new ones ranging from chickens to giant scorpions while allowing to exploit your cattle for other things than food production (like shearing for wool, collecting eggs, and so on). As usual, I’m only going over the major new features and changes. There are plenty more modding, UI and balance improvements you can find in the full change-log at the bottom of this very article.

Until now, the only thing you could do with your cattle was to butcher it for food and collect a few additional resources on top depending on the species. Not anymore! Most animals are now small factories on legs. Chicken will drop eggs, your sheep can be sheared for wool, cows will give milk on a regular basis. 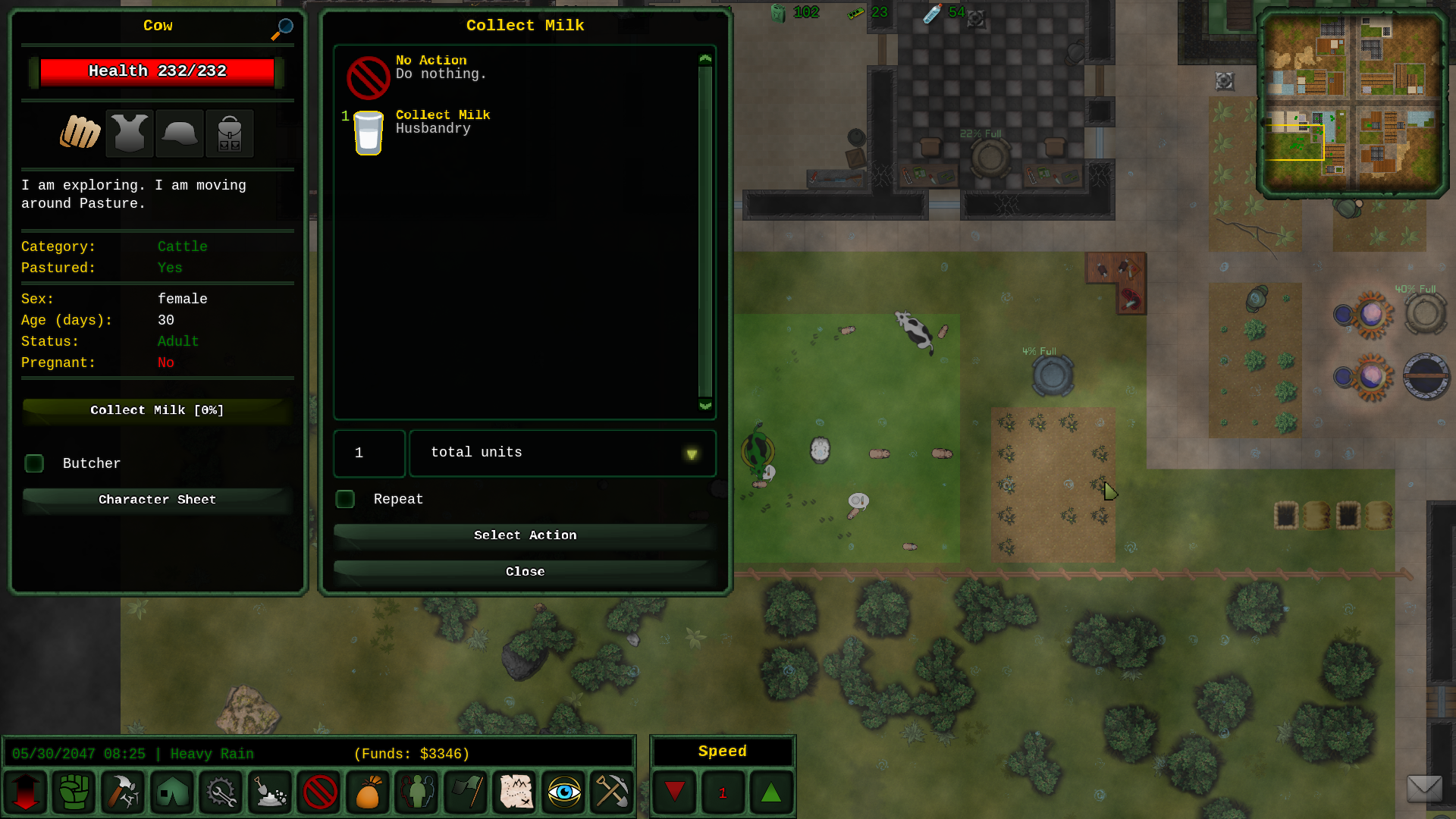 The system might look a bit cumbersome with a large animal population, but don’t worry we added a few menus to handle cattle and settlers. We’ll get to those further down.

I added a new technology to research: “Animal Care” (located after Medicine). Once completed, most wild creatures will get a chance to drop eggs when defeated. Additionally, you’ll be able to construct two new buildings. 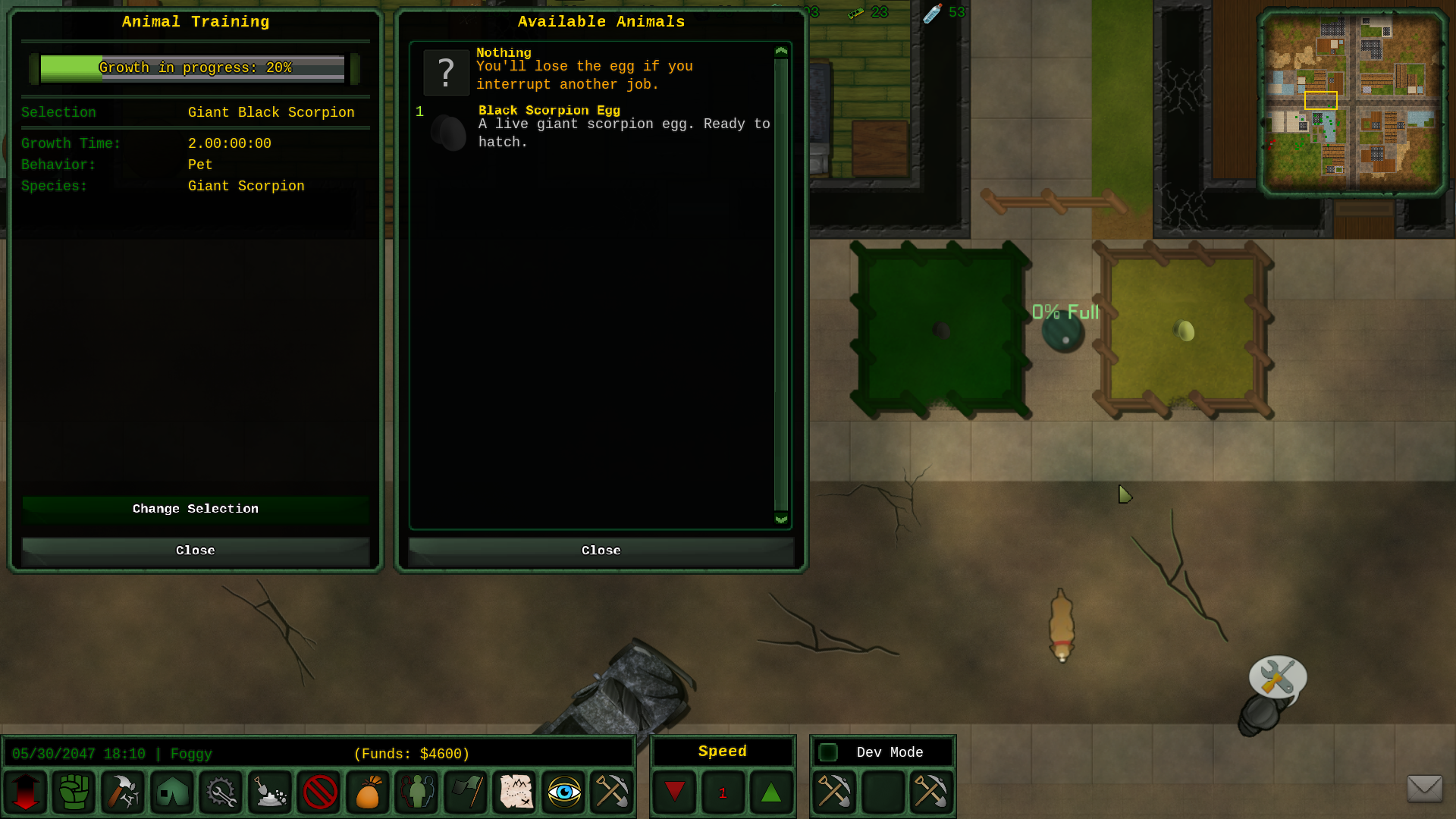 The first building is a simple container for those live eggs. The second building is an Animal Nursery. This is where you can grow those eggs into tamed versions of the defeated foes. Depending on the species, the fully grown creature can be used as cattle or as a pet (or both).

On top of the new peaceful animals, hostiles scorpions of various sizes and types have been added to the game. You’ll find the smaller and fairly harmless ones in infested houses, caverns and sewers. Much larger and poisonous ones will appear during raid/migration events. Yes, poisonous! This is a new temporary health damaging effect, for which a cure can be researched at a medical station with the remains of a scorpion.

Then, we have the Queen Scorpion, a rare, late game, event which we won’t illustrate in this article. She is our first boss-type enemy. She is extremely deadly and has more that one trick up her sleeve. Granted you have the proper tech and you manage to kill her, you’ll receive an egg to make a copy of herself.

Additionally, we’re introducing the concept of nests. Simply put, those will spawn (within limits) creatures while will patrol the location around it. For now, nests can appear in two ways: in a new low probability building, or when removing a very large boulder (5% chance). Nests can be removed by shooting at them or razing them. You can also potentially use them as a fairly manageable hunting ground.

I’m also introducing the new Colony Manager in this update. It’s a menu replacing the old “faction/communication” menu and which is containing a few handy new features. 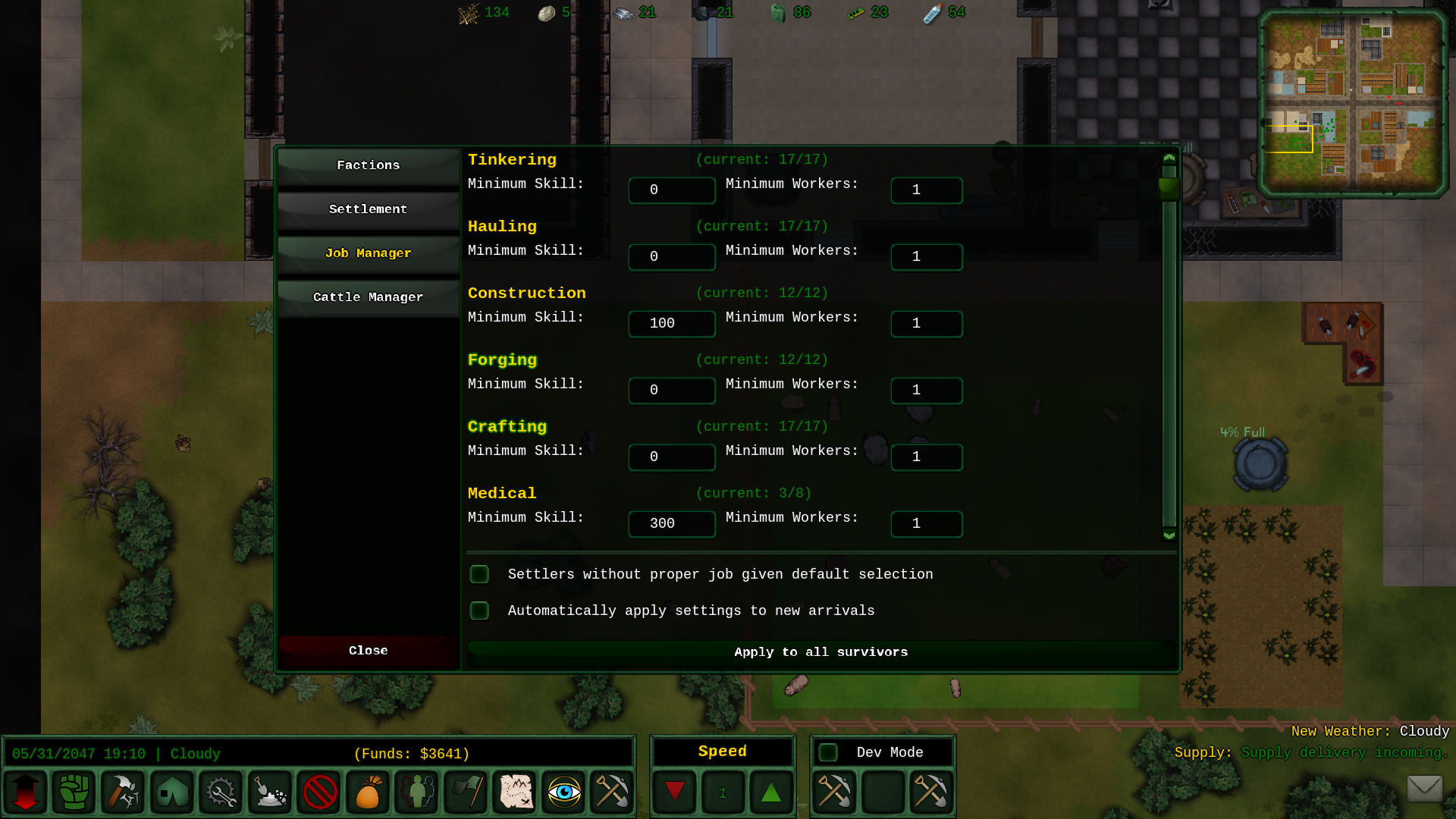 You are, of course, still able to discuss with other factions from this menu. But, on top of that, you can now select which jobs settlers can and cannot do based on their skill and the amount of people you want available. You can also use those settings as presets for new arrivals, so you don’t have to review them individually if you don’t want to. 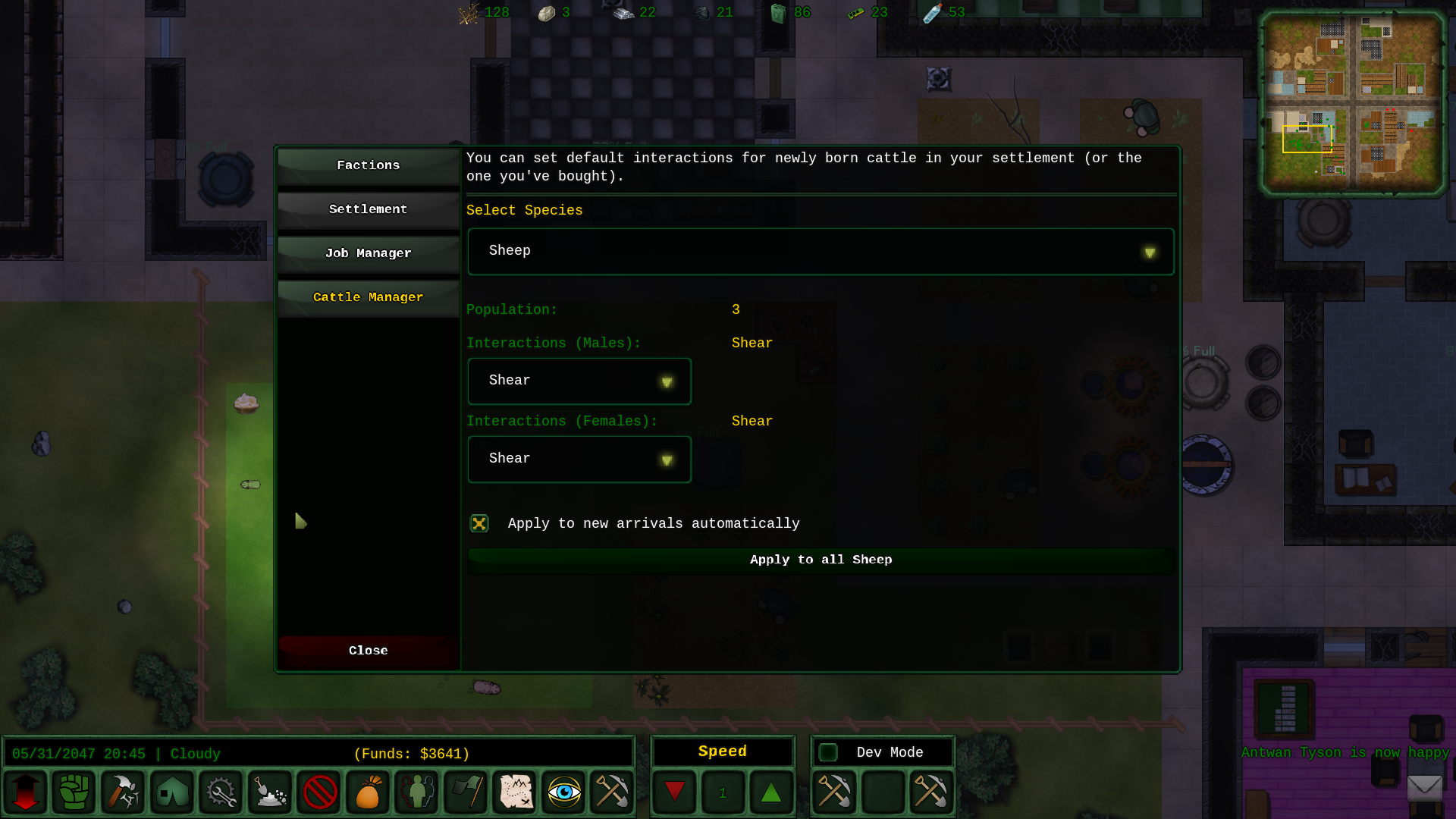 In the same spirit and with the ability to use many tamed animal species as “factories”, the colony manager also allows you to setup what you want to produce for each category in bulk. Making the whole process much easier to manage.

This is only the beginning regarding the Colony Manager, the menus will get standardized, and I will add new features in future updates.

This is technically compatible with 0.7.2 save-games. However, some of the main features won’t be active until you start a new game:

This is a very. large. update. Hopefully, it’s as bug free as possible (at least on the “critical” bug level). I’ve tested the version as much as possible, but we’re way past the point where it was still possible to fully play-test all the features and all their combinations. No worries, we’ll tackle any new issue in a timely manner through hot-patches, as usual 🙂