Here is a new update for our 0.7 branch!

It’s introducing the ability to pass various laws for your settlement, ranging from rationing to healthcare. It’s also adding the new Pharmacy building and associated technology allowing you to use experimental mutagens and drugs on your survivors. As usual, I’ll only be mentioning the major new features and improvements in this article. For a full list, please refer to the change-log at the bottom.

Before we get started

I will be increasing the game’s price by $1 (to $11.99) between the end of this month and August (after a few more minor/hot-patches). It was scheduled to happen a bit later, but given that the game is currently very stable and knowing the legal requirements (no discount for a whole month), it’s best to get that out of the way before the next large autumn sale and more experimental updates.

A new “Law” tech tree has been added to the game. Each technology in that tree unlocks a few laws and slots for them in the Faction menu (where you already conduct diplomacy, and assign jobs). 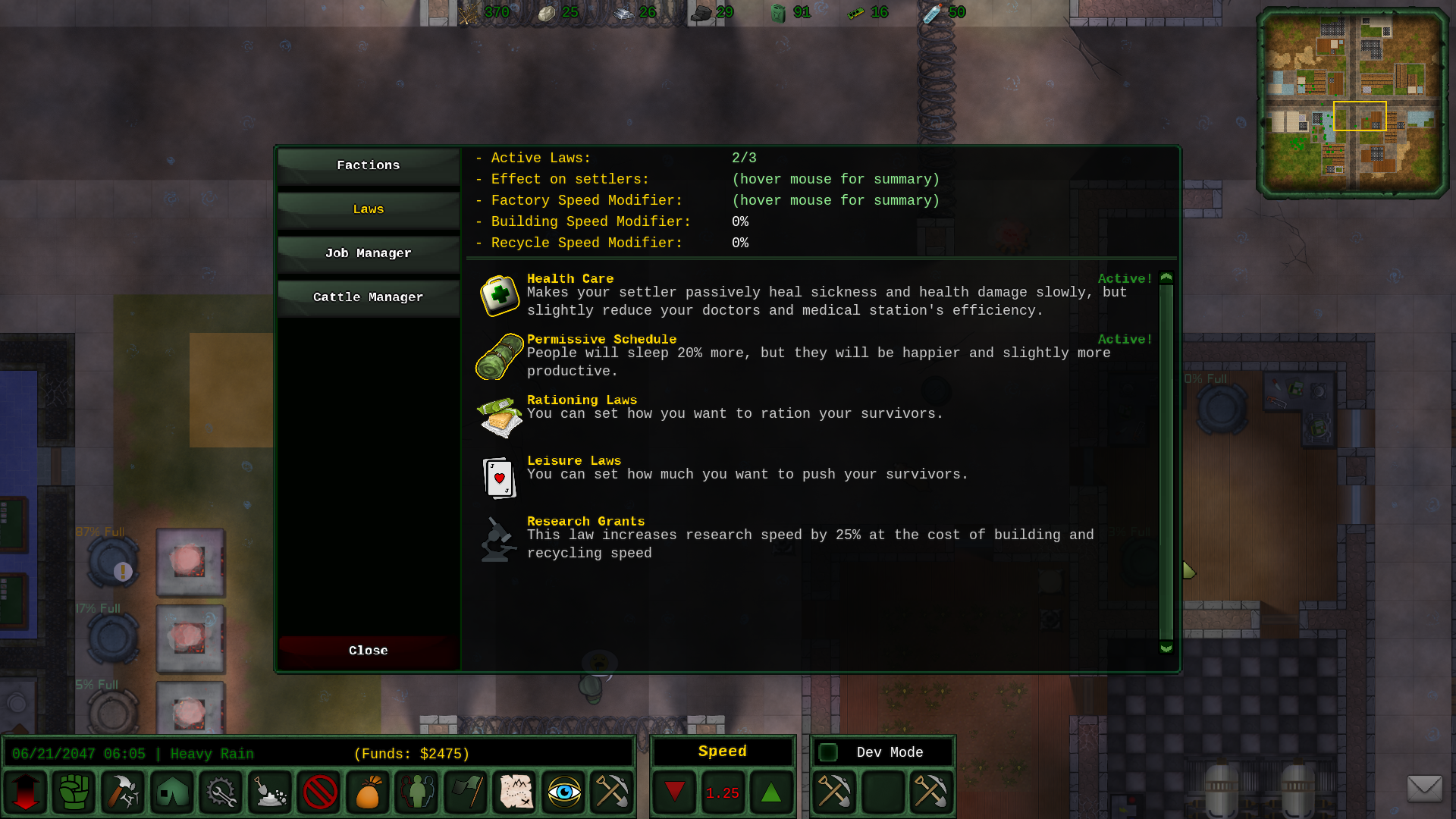 Laws influence your settlement’s productivity and your survivors’ happiness and needs. For instance, one of the early laws is about Rationing, which has 4 options ranging from people eating and drinking 40% more (and receiving a happiness and stats boost) to people needing 40% less but which will cause them to be grumpy and slow. 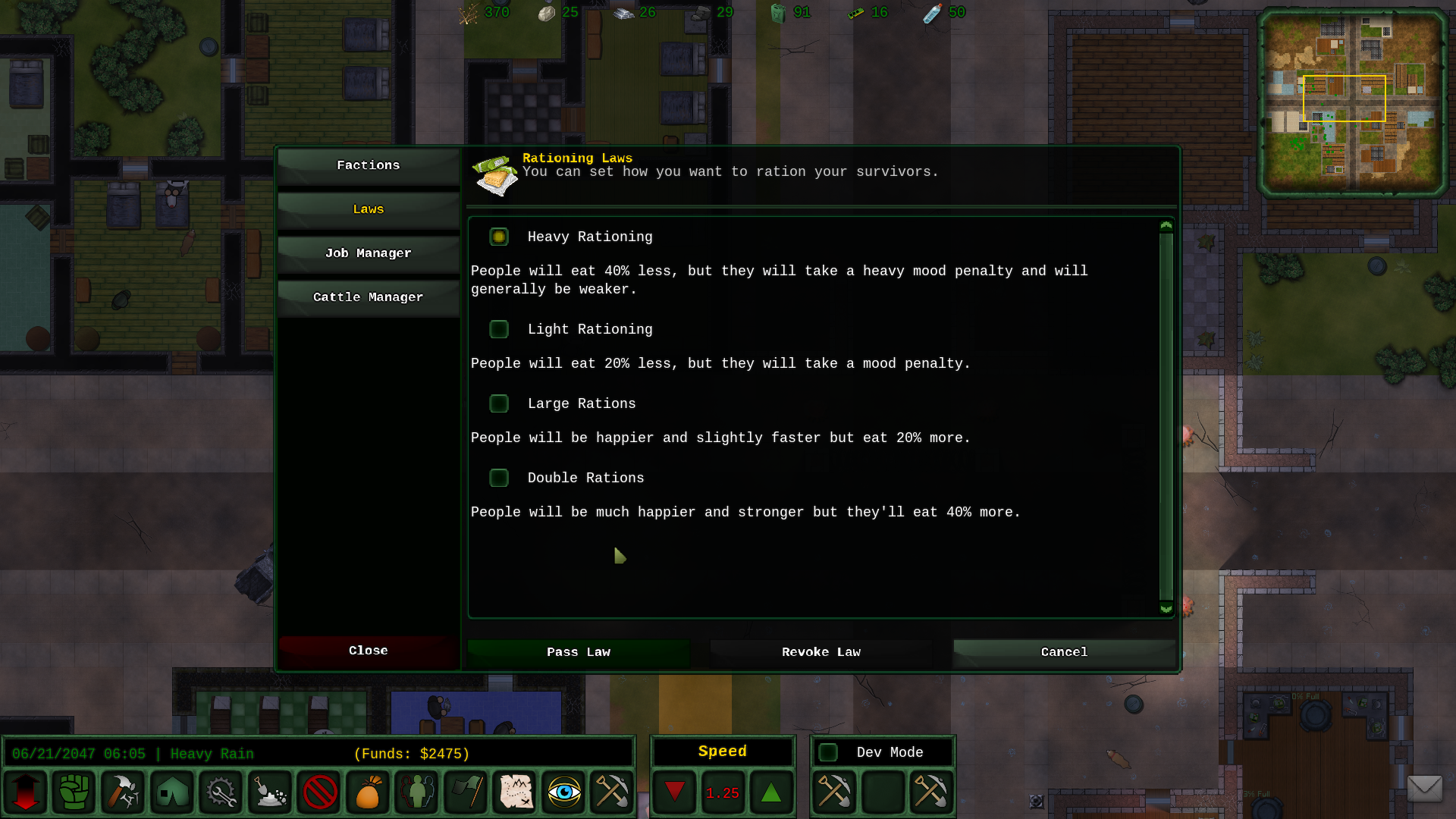 Another law, the “Emergency Shift”, will dramatically increase your survivors efficiency for a day, they will even ignore the needs to sleep, drink or eat, but it will give them a massive debuff the next day.

There’s a total of 9 laws included in this release, more will be gradually added in future updates. 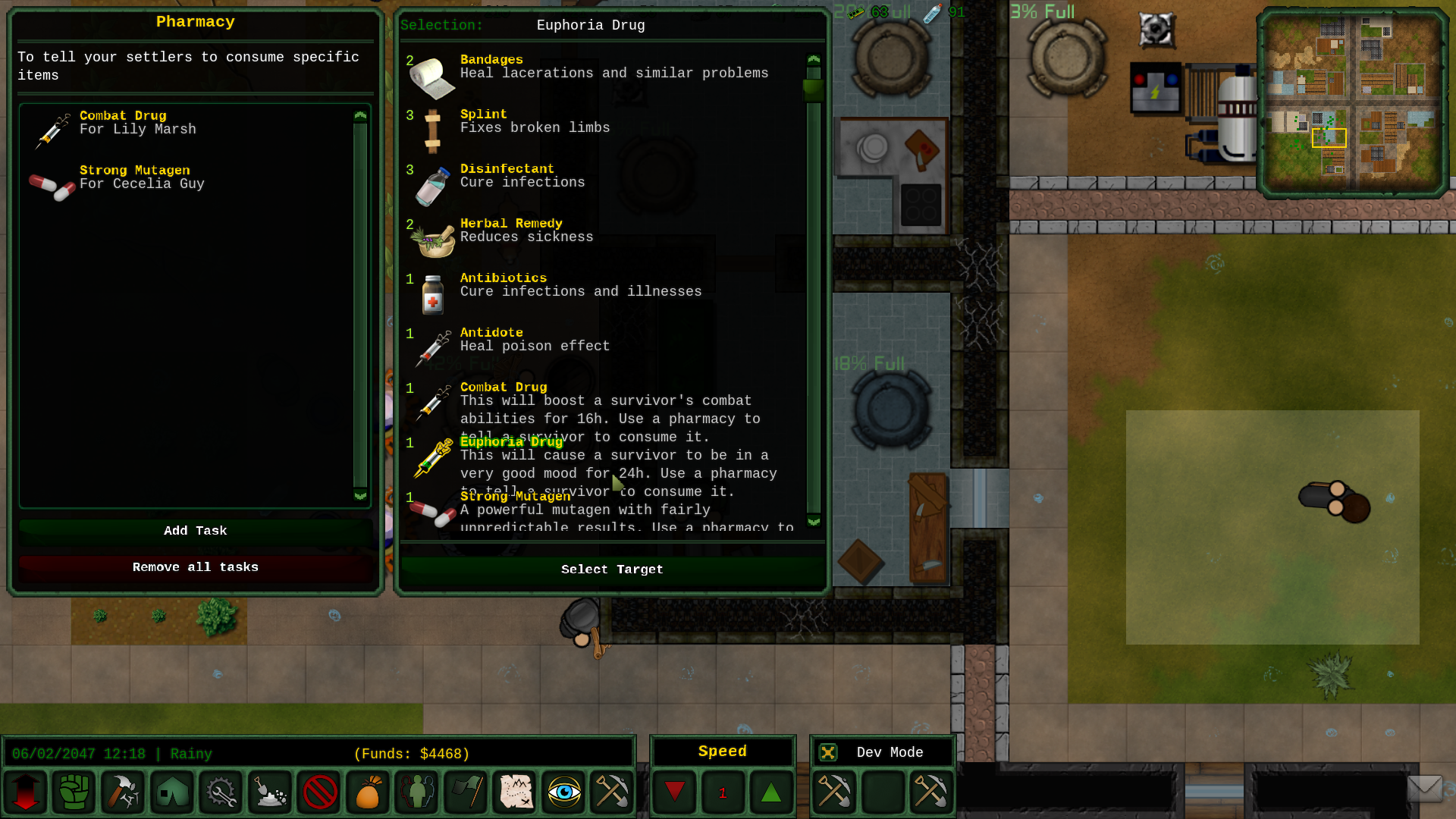 It serves a dual purpose:

1) If you don’t trust your medics to save someone ill or wounded in time, you can tell the wounded to go use the item themselves.

2) It gives you (the modders and me) a way to ‘feed’ survivors with items they wouldn’t normally use, like the 3 new drugs and mutagens included in this release.

This is the first part of a 2 parts update on the turrets. They look much nicer now, with a fixed body and a rotating gun and new more detailed sprites. Trading vehicles have visible and working mounted turrets now. Attack a trader if you dare 🙂 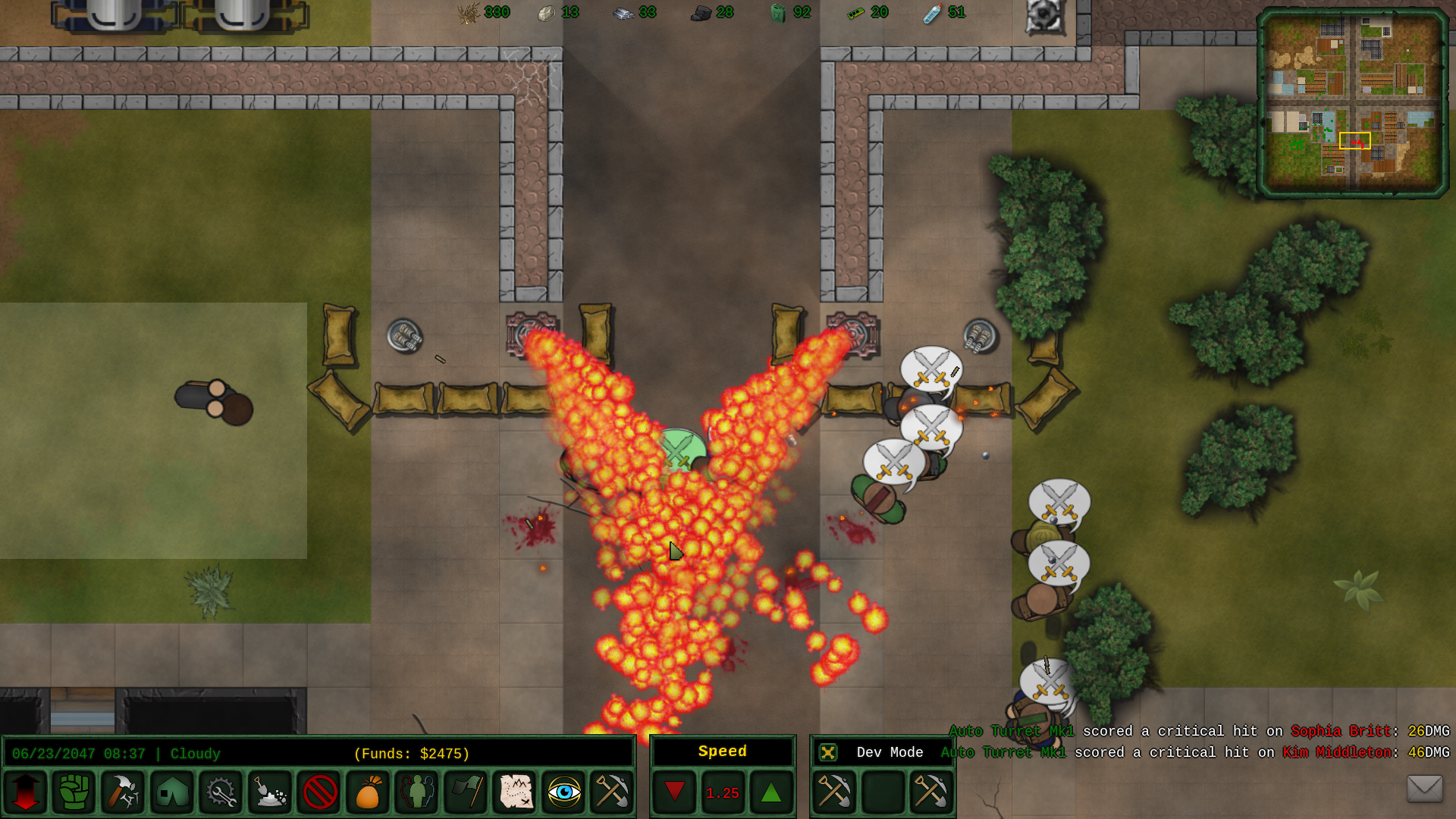 Next turret update will overhaul our current turrets, from low level ones that will require ammo, to larger gun platforms with several cannons on the same item.

Also as an experiment, a rare Gauss Cannon schematic (this is for all intent and purpose a tech) can be found while exploring military bases. This is a rare drop, however, so you might have to try quite a few times before getting it. This is something (unlocking tech through exploration) that will become more common in future updates.

The initial loading time has been very heavily reduced. Beforehand it would take up to 20 seconds on my machine to get to the main menu (without mods), it’s now taking about 5 seconds (first launch excluded, because windows does its thing each time an executable change). Similarly the impact of mods on loading time has been reduced.

Additionally, I fixed a fairly annoying memory leak (tied to the menus) which was causing the memory usage to go beyond 4GB over time. The game now keeps a fairly steady memory usage over much longer periods (roughly 2GB on a medium sized map). This should also improve performances on older machines.

By request, pastures can now be set to contain a list of species instead of the former one/all approach. That should make it easier to separate meat production from utility animals. 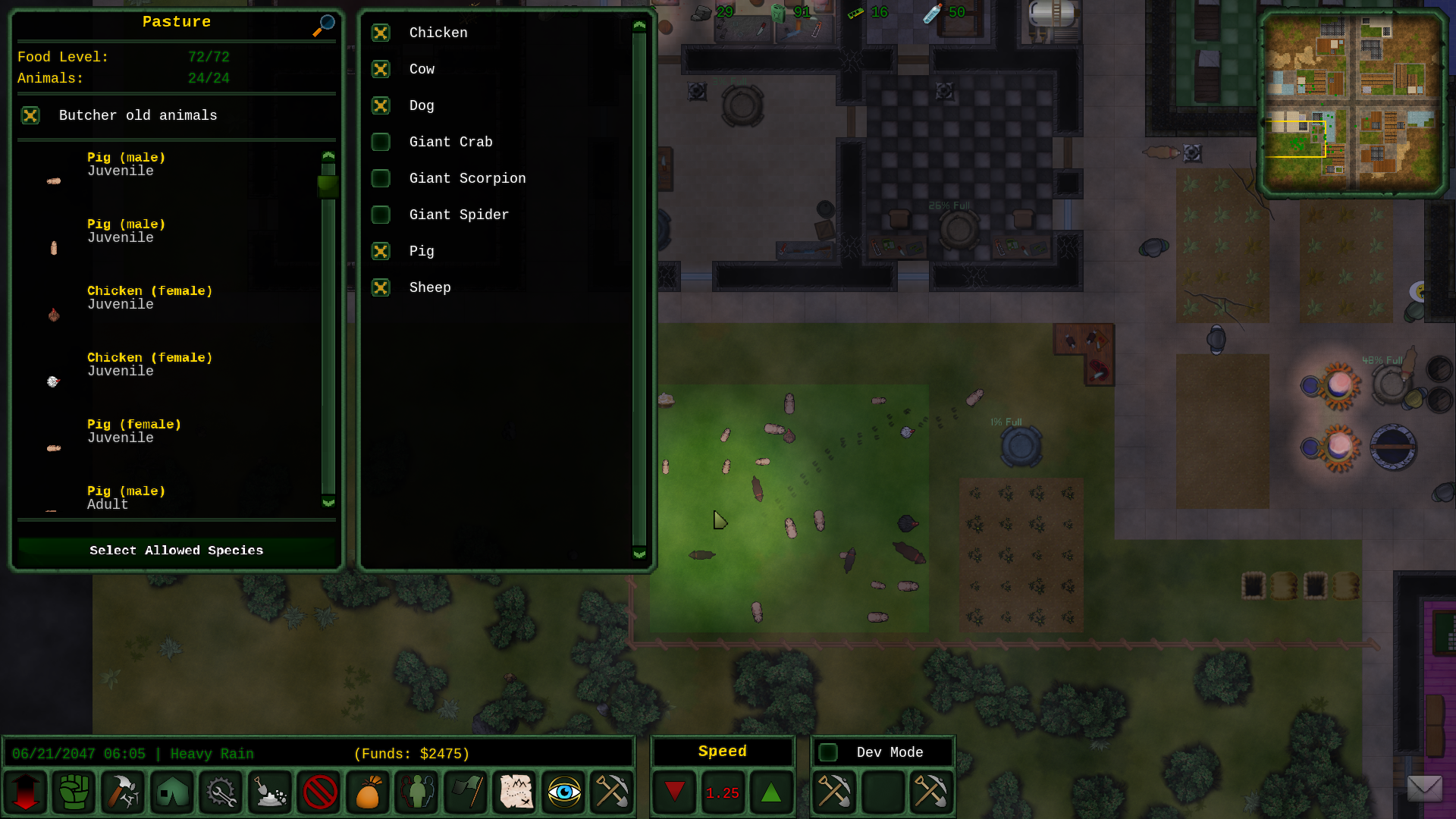 Many of you will be happy to know that survivors will no longer do a bunch of back and forth fetching different items when constructing a structure requiring multiple resources. Instead they will grab everything they need (assuming they have the inventory space) and bring it to the construction site in one go. It speeds up the construction of walls and many other structures by quite a lot.

However, they will still have the old behavior when feeding stations/forges and so on. I do intend to make that work for those too, but it requires many changes to how stations operate as well. So it will have to wait. Don’t worry, it’ll happen soon barring any problem 🙂

And of course, there’s a bunch of fixes, modding and graphical improvements, balance and UI tweaks which you’ll find in the change-log 🙂

We’ll likely have another medium sized update like this one (to make mining more interesting and to add a bunch of laws and drugs/mutagens while finishing the work on turrets) before the “next big update” as in non lethal combat, prisoner and force labor management.

In any case, I hope you’ll enjoy this update!