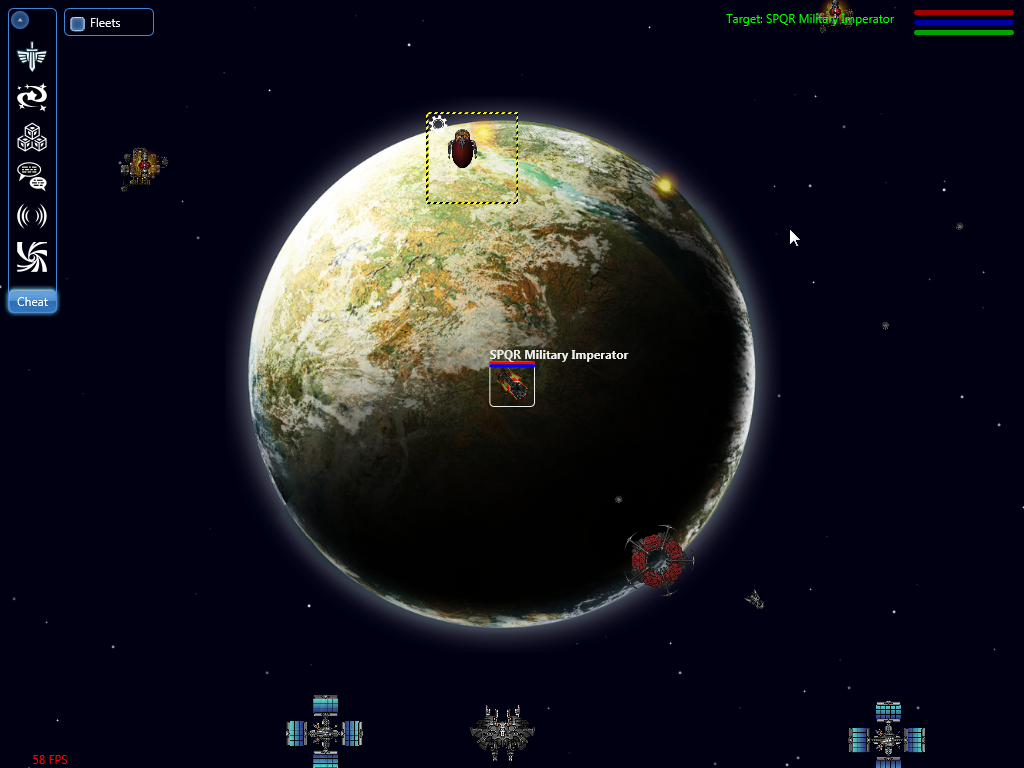 So, I implemented a kind of jumpdrive to fast travel between locations. I think I have struck a relatively good balance, preventing to use it as some kind of invincibility cheat while still allowing the player to skip (or at least shorten) long travel routes in empty space.

The exact numbers are ship dependent and still need to be tweaked, but the general rule of thumb is that most ships can use the jumpdrive to teleport to any sector in a 5 sectors radius. It takes roughly 10 seconds for the ship to do the jump. During this period it basically can’t move, making it extremely vulnerable. Then, it takes a minute or two for the engine to recharge. Jumps can be cancelled but it will still need to recharge. Jumpdrives won’t need fuel to work, though.

This system, combined with the warpgates, allows most ships to get to any major location in the galaxy relatively quickly. The whole thing is fully implemented for both the player and the NPC ships. And it makes a world of difference. For instance military fleets are much faster at responding to threats, and seeing a whole offensive fleet jumping at the same time at their destination is quite a sight. It obviously also benefits to trading and pirates in quite a huge way.

This also opens the road for “strategic” retreats which is a much needed feature now that ship production is depending on the economy.

As you may have noticed in the first screenshot, stars and planets aren’t placed at random anymore. Each cluster of sectors (3×3 to 5×5) on the map(s) is a solar system with it’s own planets and characteristics. More importantly, planets will have a role in the game making them important places to defend.

First, the “capital” sector of a system has been moved from the sun to one of the planets. Secondly each planet is defined by its population (and race), type (temperate, volcanic, gas giant…) and more importantly by the kind of colony it has. Each colony type offer a different bonus to the faction controlling the planet. Here’s a work in progress list:

You may be wondering what is “manpower”. It’s a soft cap to the amount of non civilian ships a faction can produce (basically the military). Each ship, depending on class and type need both manpower and ship parts to be produced. Until now, manpower was determined by the amount of sector a faction controls only + an innate value that’s faction dependent. With this change planets will become the largest provider of manpower.

Also, this is not implemented yet, but planets and stars will determine how many stations and factories a sector can support. Basically, empty sectors in lanes between solar systems will only support a few factories, while a large industrial world will support several ship and station parts production facilities. The goal is to get a more coherent layout when it comes to factories. That said I am not sure how / if it will apply to the player. The SPQR (yes, it’s the old roman empire) is a new minor faction, like the ISA, single solar system, doesn’t expand. It’s a splinter group from the Human Federation. They have their own unique and powerful ships and their own heavily armed military bases and trading stations. However, you’re pretty unlikely to visit their territory early on as they will shoot on sight anyone entering their home system.

However there’s a twist. My issue is that it’s kind of a spoiler while still being the first part of a major game mechanic and selling point. So, here’s the deal, I am going to explain it in the following paragraph that you’ll need to highlight with your mouse to read properly. If you want to read it, do it, I am not sure it would ruin your enjoyment of the game anyway, but different people have different thresholds.

SPOILER START [highlight with the mouse to read]

Simply put the SPQR really doesn’t like the democratic human federation and are building up strength to openly rebel against them. After a given amount of time (around one game hour, it’s randomized), the SPQR will start checking how strong the Federation is. And if they happen to be on top despite having a single system or if the federation grows too big for it to defend all it’s territory efficiently, the “Phoenix Rises” event will be triggered : This minor faction will become a fully featured one and will declare a permanent war against the Federation. Incidentally, they will open their borders to non federation ships, making you and other factions able to trade with them in peace. After that, the game will unfold as usual, depending on alliances, over extension of one or another of the parties involved, and your actions, it’s anyone’s game. Note that depending on what happens in the game, the event may never trigger, or the federation may decide to invade the SPQR preemptively.


In the final game, each of the major faction (Drath, Humans and Siraks) will have such an event to hinder them if they grow too big or too small. The events will be extremely different from a faction to another, and may or may not happen depending on the situation. This feature is implemented for multiple reasons: first and foremost as a balancing factor to keep factions in check. But also to keep the world interesting for the player to live in, and to give you options: is it beneficiary for you to help the rebels and get access to their shipyard and mighty but costly ships ? Wouldn’t be better to help out the federation which gladly buy your drugs that are illegal in SPQR space and whose ships aren’t as much as a threat to you ? Or won’t you care at all and finish off the victor ?

That’s all for the SPQR 🙂

I also fixed a bunch of small issues and a few potential crashes. Most of the actual changes and improvements are related to things I implemented after 0.6.3 so I don’t think it’s relevant to list them here. A fun one though, and to demonstrate how much two wrong characters in about 50.000 lines of code can change:

While tweaking the swarm queens introduced last week, I accidentally removed the cap on how much followers they can spawn using the energy the get from eating asteroids (“<” instead of “>”). I also forgot to prevent them from using the new “jumpdrive” (“1” instead of “0”). But in my mind, they were still working as intended. As I am also in the process of balancing the factions ships, I made a small symmetric map with a system per faction and I usually let them fight to see who has an edge. The center sectors being usually, very, very busy. Incidentally, this is a sector rich in asteroids. Yeah. So 3 fleets, Drath, Sirak and Core where fighting an all out war, when a queen I completely forgot to disable and who has been eating asteroids for god knows how long decided it was a good time to jump in… With.. It’s… 40 guardians ! They wiped the sector clean without breaking a sweat, sending back 3 factions to the stone age. Funnily enough, with such protection and unhindered by enemy fire the queen was eating the whole time spawning more guardians as a result. Basically the swarm was bigger after the fight than before. This is now fixed, of course 🙂